On Writers’ Room Podcast, How Jim Rome Fell in Love with Racing 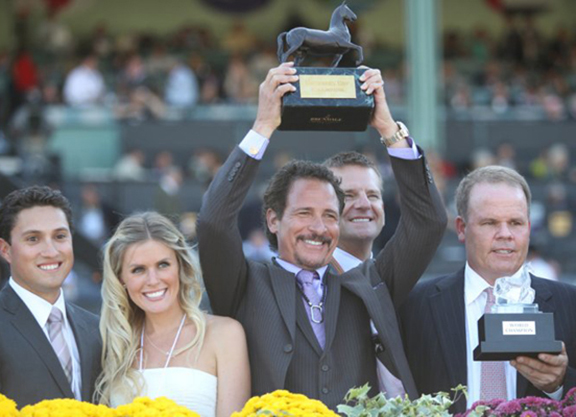 There was a time when radio host Jim Rome poked fun at horse racing, demeaning it as a sport. “It’s not a sport, it is a bet,” he said. Today, he is not only a fan and an owner and breeder but he has become an ambassador for horse racing, sharing his love affair with the game with his audience of 2.5 million and anyone else who will listen.

Rome’s transformation from critic to an advocate happened virtually over night. The credit, he told the panel on this week’s TDN Writers’ Room podcast, presented by Keeneland, goes to the first horse he ever owned a part of, Wing Forward (Arg) (Arch).

Rome knew Billy Koch from Little Red Feather Racing and said Koch was continually pestering him to invest in a horse. His wife, Janet, also thought it was a good idea because she thought her husband needed a hobby. So, Rome bought in and the payback was almost instantaneous. In his first start with Rome as a part of the ownership group, Wing Forward not only won but won in dramatic fashion.

“I go to the race and you have to understand, I am naive about the process,” said Rome, this week’s Green Group Guest of the Week. “I know sports but I didn’t know horse racing. This horse, to quote Trevor Denman, came from out of clouds, from worst to first. I’m not kidding you, it’s like somebody rolled up on me and shot me with equine crack. I turned to Koch and said, ‘Dude, what else do you have to sell me, what else can I buy? It all changed in a second. My whole life changed in a second. It was the most amazing thing.”

Some 13 years later, Rome has gone from a partner on one horse in a syndicate to someone who co-owned two-time GI Breeders’ Cup Turf Sprint winner Mizdirection (Mizzen Mast) and multiple Grade One winner Shared Belief (Candy Ride {Arg}) and now has a promising homebred in the filly Gidgetta (Fast Anna), a recent maiden winner at Santa Anita.

Winning races is obviously still a thrill, but it’s not what why Rome has become so involved in the sport. It’s his love of the animal.

“Somebody said to me early on, ‘Jim, here is your problem, you fall in love with every single one of the horses.’ I said, ‘That’s not my problem, it is why I am in the business, because I fall in love with every one of the horses,” Rome said. “We were hemorrhaging money at first. We were having no success. Never mind winning a stakes race. I couldn’t get into a stakes race, but I was having the time of my life because I loved every one of the animals. They were so different and so unique and I could recognize the athletic qualities in the horses. First and foremost, I love the animal, more than the business, more than the wins.”

His feelings about the animal are easy for people within the horse racing industry to understand, but he says the focus on the breakdowns at Santa Anita last year often puts him on the defensive when he tries to explain his feelings to outsiders.

It is the same people, he says, who can’t understand how it is possible to both love the animal yet participate in a sport that can be very dangerous.

Rome added that it is important for the industry not to run from its problems.

In this week’s news segment, presented by West Point Thoroughbreds, the writers discuss last week’s Kentucky Derby preps, how horse racing can learn from the XFL to be more transparent, and the pros and cons of the recent Equine Safety and Welfare legislation introduced in the California assembly.