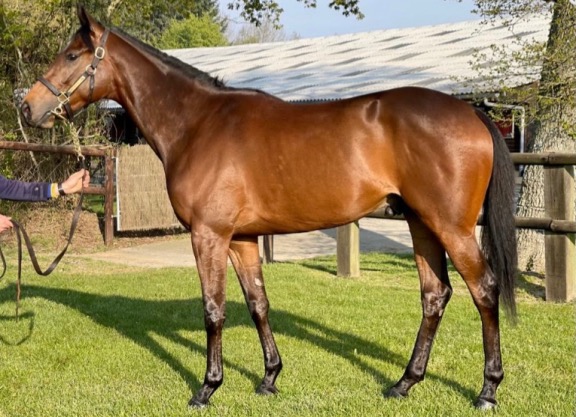 Having become the first European auction to be staged entirely online in 2020, the Osarus Breeze-up Sale returned to its more usual format this year, selling live at La Teste de Buch racecourse and setting a new record top price of €200,000 in the process.

The sale-topper had not originally been intended for this sale but, following the relocation of the Arqana Breeze-up Sale from Deauville to Doncaster, French-based consignor Philippe Prevost Baratte opted to keep his Wootton Bassett (GB) colt at home, sending him to Osarus as lot 45A, one of three late supplementary entries.

The first foal of the dual winner Ettu (GB) (Excelebration {Ire}) was co-bred by Haras d'Ellon's Thierry de la Heronnierre and Salabi Racing, and he was unsold as a yearling at €55,000 when offered at Arqana's delayed Select Sale last September. Nicolas Bertran de Balanda of NBB Racing was clearly impressed by his work on the La Teste turf and ended up being the successful bidder on behalf of an undisclosed client.

“He's going to head to Francis Graffard in Chantilly,” said the agent. “I saw him before the sale at Philippe's and I really liked him. He's a nice-looking horse and a good mover and his breeze was good—it looked easy for him and he vetted well.”

Ongoing Covid restrictions have meant that both the Arqana sale and the Tattersalls Ireland Goresbridge Breeze-up have had to be relocated to England for the second year running. Osarus, which is generally a more domestic affair, has remained in France and was rewarded with a decent attendance from local trainers and agents.

Bertran de Balanda added, “There were quite a few French buyers there and on the Wootton Bassett there were three or four of us battling on the horse. I like to buy from Philippe because he's very professional and I know the work has been done very well beforehand. It was a difficult decision when the sale was moved, but his other option was to sell in Deauville in July, but they have made the right choice and have got a good price for the horse.”

Not long after securing the top lot at La Teste, the agent watched from afar as one of his 2020 purchases, Chez Pierre (Fr) (Mehmas {Ire}), who is also in training with Graffard, maintained his unbeaten record at Chantilly. The Roy Jackson-owned colt holds an entry for the G1 Commonwealth Cup at Royal Ascot but may step next into listed company.

“It was a good comeback for him,” said Bertran de Balanda of the colt's third win. “He put on a lot of weight over the winter and has become a massive horse which was why it took a bit of time for him to return. But he was good today. He needed the run but Francis and Pierre-Charles [Boudot] were very happy with him and now he's going to step up to good company. I think Francis would like to run him in the Prix Texanita in two weeks' time.”

Another late entrant switched from Arqana, the Kodiac (GB) colt out of the unraced half-sister to G1 Prix d'Ispahan winner Sageburg (Johannesburg), was sold privately by Ecurie de la Dentelle for €95,000 to Anne-Sophie Yoh of YOHEA.