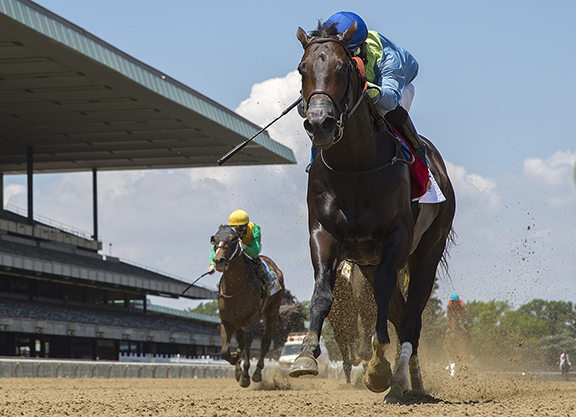 Four out of the five runners from the GI Woody Stephens S., topped by winner No Parole (Violence), will face off again Saturday in a loaded renewal of the GI H. Allen Jerkens S. at Saratoga. 'TDN Rising Star' No Parole won his first three races against fellow LA-breds by a combined 34 lengths. Facing defeat for the first time when trying two turns in the GII Rebel S. Mar. 14, the bay returned to the winner's circle when cut back to six panels in an Oaklawn optional claimer Apr. 24 and was last seen scoring a decisive victory in the Woody June 20.

Fellow 'TDN Rising Star' Echo Town (Speightstown) captured a Churchill optional claimer May 25 prior to a runner-up effort in the Woody Stephens. The third-place finisher in that test, Shoplifted (Into Mischief), is also a 'TDN Rising Star' and winner of the Springboard Mile S. at the end of last year. Also exiting the Woody Stephens is fourth-place finisher Mischevious Alex (Into Mischief), winner of the GIII Swale S. Feb. 1 and GIII Gotham S. Mar. 7.

Eight Rings (Empire Maker) looks to return to his juvenile form in this test. Winner of the GI American Pharoah S. last term, the 'TDN Rising Star' could only manage sixth in the GI TVG Breeders' Cup Juvenile S. Nov. 1 and was fifth in his seasonal bow in Oaklawn's Bachelor S. last time Apr. 25.

Tap It To Win (Tapit) should relish this cut back in trip. Capturing a six-panel event at Gulfstream May 9, the bay wired the field when stretched to 1 1/16 miles at Belmont June 4 and was wheeled back just 16 days later in the nine-furlong GI Belmont S., where he faded to fifth after setting the pace.