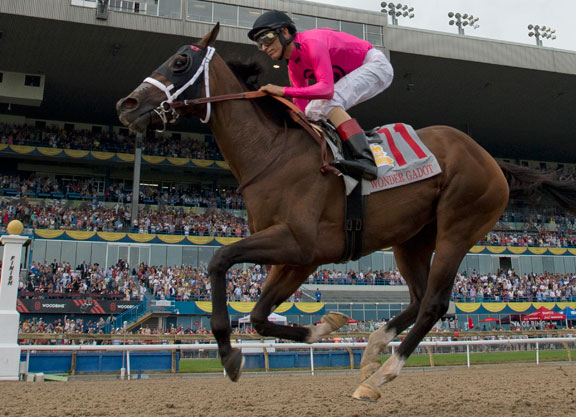 Gary Barber's 'TDN Rising Star' Wonder Gadot (Medaglia d'Oro), a dominant winner of the Queen's Plate S. against males last out, will look to take the second leg of the Canadian Triple Crown as the heavy favorite against five rivals in Tuesday's Prince of Wales S. at Fort Erie.

Victress of the GII Demoiselle S. last December, the dark bay suffered a series of tough beats when second or third in her next six starts, including a half-length defeat by presumptive champion Monomoy Girl (Tapizar) in the GI Kentucky Oaks May 4 and a head loss in the Woodbine Oaks June 9. She left no doubt three weeks later in the Queen's Plate, however, speeding clear in the stretch with the addition of blinks to score by 4 3/4 lengths.

The second and third finishers that day will re-oppose in Aheadbyacentury (Midnight Lute) and Cooler Mike (Giant Gizmo), respectively. Home Base (Street Sense) rates a look after shipping in from his Churchill Downs base. An upset graduate at 32-1 Apr. 13 at Keeneland, he repeated in a May 26 allowance under the Twin Spires, earning a 92 Beyer, tops in the field outside of Wonder Gadot. He'll have to bounce back, however, from finishing last in the GIII Matt Winn S. last out June 16 in Louisville.