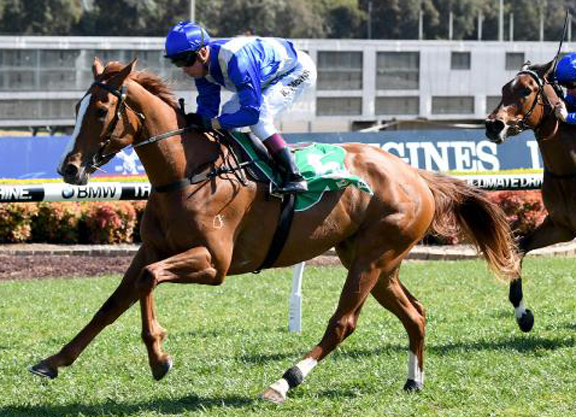 The regally bred Woman (Aus) (Frankel {GB}) made a successful debut when she captured the TAB Rewards H. going 1250 metres at Canterbury on Wednesday (video). Out of Australian champion older horse and eight-time Group 1 winner More Joyous (NZ) (More Than Ready) who was one of two mares sent by owner John Singleton’s Strawberry Hill Stud to visit Frankel on Southern Hemisphere time in Newmarket, the Gai Waterhouse/Adrian Bott trainee rated in fourth well off the rails through the early going. Cut loose by Kerrin McEvoy turning for home, the $1.65 crowd’s pick swooped up to even terms 300 meters out, before dashing clear a two-length winner. Laussel (Aus) (Animal Kingdom) was second. Co-trainer Bott confirmed that the 1400m Listed Reginald Allen on Everest Day, Oct. 14 was a possibility for the 3-year-old, providing she came out of the race well.

“There’s a nice race in a couple of weeks time we can look at, but we are mindful of what we want to achieve in the Autumn,” Bott told racingnsw.com.au. “We’ll be patient and see what happens. It was great to see her do that for the team and Singo, it’s been a long range plan with the mating and getting her into the stable. She was the ultimate professional and I think we saw she has so much scope. It probably took her a while to build into it, certainly she will get over a lot further in time.”

Added hoop McEvoy, “There’s still improvement to come, she has a big frame and he still has to grow into it. She’s not the full-furnished article yet, that’s what is exciting.”

Woman is the second Frankel offspring to race in Australia, following Merovee (Aus), who is out of Singleton’s MGSW & MG1SP More Strawberries (Aus) (More Than Ready) and was sold for A$1.6 million as a yearling during the 2016 Inglis Easter Sale.