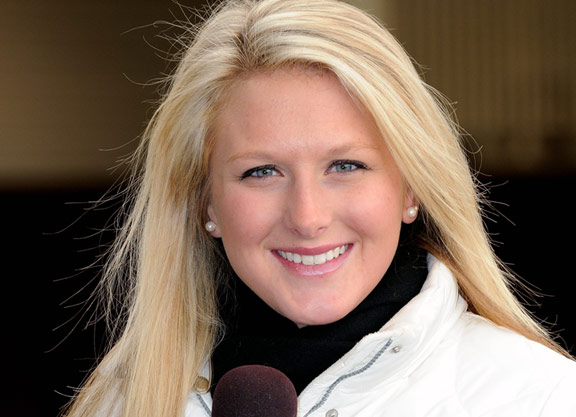 As a third-generation horse woman with a degree in broadcasting, the position of paddock analyst for the New York Racing Association was a perfect fit for Maggie Wolfendale. She started the job in 2010 and has since become the face of the New York racetracks, or at least their paddocks.

“I grew up at the barn, barn 18 at Laurel Park [where her father Howard Wolfendale trained],” Wolfendale said on a blustery winter day at Aqueduct. “I had ponies and retired racehorses before really starting my life at the track. I started galloping when I was 16 for my dad. Everything progressed from there. I really fell in love with it more once I graduated high school and immersed myself in the racetrack culture. I loved working with the horses in the morning and went to school for broadcasting, so I got to marry the two. I kinda feel like the luckiest girl in the world that I got to do that.”

After graduating college, Wolfendale sent out her resume and tape to every racetrack in the country and was thrilled when NYRA came calling.

“I found myself very fortunate that NYRA were the ones calling me back with a serious offer,” said Wolfendale. “I obviously jumped on it because, most of the time, this is the best racing in the country. I feel very blessed.”

While Wolfendale's main focus is analyzing the horse flesh presented in the paddock, she does do her share of prep work. In addition to some light handicapping to see how the race may be run, she keeps detailed notes on all the horses she has seen before and checks pedigrees and sales workouts on first time starters.

“I do this research for a basic understanding of how the race may play out, who might be the speed and who might be closing, changing surfaces, etc,” Wolfendale said. “But obviously, my main focus is when I step into the paddock. I only have 10 minutes to look at these horses, so having as many notes and things to go back on and relate to helps. But, a lot of my work is just done in those 10 minutes before I go on.”

What Wolfendale looks for in the horses is dependent on the condition of race, but, generally speaking, she is searching for horses with good muscling and shiny, healthy coats.

“A lot of it depends on the conditions of the race,” the 33-year-old said. “Do they have the proverbial turf hoof? Do they have that frame, kind of angular hind end of a turf horse? When looking at horses coming back off layoffs, I look for whether they are muscled enough, strong and fit enough to come back, and maybe get the job done at first asking if they're a short price on the board. It's an overall kind of thing I look for in horses, but also specific to the race conditions.”

Working on what is arguably the best racing circuit in America, Wolfendale gets to study some of the top horseflesh in the country, such as Triple Crown winners Justify (Scat Daddy) and American Pharoah (Pioneerof the Nile).

When asked if analyzing those types of horses comes with more pressure of preparation, Wolfendale said, “Of course it's more preparation, but it also makes my job a little bit easier in the paddock because I'm looking at very good horses. With good horses, what you see is generally what you get out on the track. They're genuine. That's why they've made it to the upper echelon of racing. If I see a horse that maybe is a tick below what I've seen from them in the past, they generally don't run as well. Or, if they look that much better, then they improve their effort.”

The lifelong equestrian's job has also been expanded to include horseback interviews after some of NYRA's stakes races. Those interviews are performed aboard Wolfendale's trusty off-the-track Thoroughbred Yeager (Medaglia d'Oro), who is one of many former racehorses she has retrained for a second career as a show horse or, in this case, track pony.

“I love it,” Wolfendale said about her new role. “It's such a thrill to come back and be right there with the winning rider and horse after a big performance, after these big stake races. Just being next to those horses too, because you become a fan. You're always a fan, at the end of the day. Being next to them and their riders, it's very special and it's probably the part of my job I love most.”

She continued, “For instance, my husband, [trainer] Tom [Morley], won a race up at Saratoga, a stake, and being next to our mare after that was really cool for me. Also, when Imperial Hint (Imperialism) won the [GI Alfred G.] Vanderbilt, he was the only horse who wouldn't let me interview. He was scared of me and kept backing away. Javier [Castellano] almost fell off a couple times, so I was like, 'All right little man, you go ahead.'”

In addition to being around some of the best racehorses in the world, Wolfendale also gets to interview some of racing's top trainers, owners, breeders, riders, etc. While she found it impossible to name a favorite interview, she did recall a few recent highlights.

“I interviewed Jaime Roth of LNJ Foxwoods, and she was very touching,” Wolfendale recalled. “Unfortunately, they had a horse get hurt the week before and then Dogtag (War Front) won the P.G. Johnson up there. She was very emotional, but she was very succinct in her words and just chose her words very carefully. It just came off very nicely. She allowed me to ask her some questions that might make her a little vulnerable. That was a great one.”

When not at the track, Wolfendale can be found caring for her young daughter Grace, lending a hand in her husband's barn or working with one of her OTTBs. Her life is truly dedicated to Thoroughbreds and she has been lucky enough to marry that passion with her career and family. Wolfendale's extensive knowledge and understanding of racehorses and her keen eye make her an important part of NYRA racing for fans, handicappers and horsemen alike.