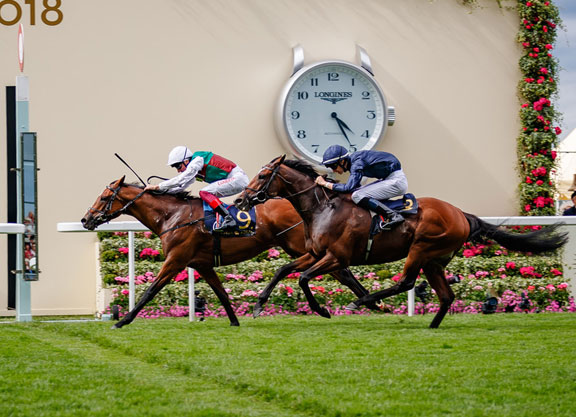 G1 St James's Palace S. winner Without Parole (GB) (Frankel {GB}-Without You Babe, by Lemon Drop Kid) has been retired from racing and will enter stud in 2021 at Newsells Park Stud.

Campaigned as a homebred by John and Tanya Gunther, Without Parole won his lone start at two by six lengths for John Gosden and went unbeaten through his first three starts at three, winning Sandown's Listed Heron S. before taking the St James's Palace in the second-fastest mile ever run at Ascot and with Group 1 winners Romanised (Ire) (Holy Roman Emperor {Ire}) and U S Navy Flag (War Front) in his wake.

Without Parole made two starts at four before joining trainer Chad Brown in the U.S. He was third in last year's GI Breeders' Cup Mile on his American debut and picked up two more Grade I placings over the past year, including a third in the Shadwell Turf Mile on Oct. 3.

Without Parole is a half-brother to GI Breeders' Cup Dirt Mile winner Tamarkuz (Speightstown), who has four first-crop winners in the U.S. from 21 foals. Their dam, Without You Babe, is a half-sister to GI Travers S. and GI Cigar Mile winner Stay Thirsty (Bernardini) and she has also produced the listed-winning She's Got You (GB) (Kingman {GB}).

“Without Parole has given me the most memorable and exciting day of my life with his victory in the St James's Palace S. at Royal Ascot,” said John Gunther. “It was my biggest dream come true and I continue to be overwhelmed by the heart and perseverance he has shown with his racing pursuits in America. He has raced in 12 consecutive Grade Is and faced myriad traffic obstructions, at times unsuitable turf conditions and he just never gives up, as demonstrated again by his third-place finish in the prestigious Shadwell Turf Mile. I love this horse and can't wait to breed to him.”

Newsells Park Stud General Manager Julian Dollar added, “We're delighted to be standing Without Parole at Newsells Park. It's no secret that we, like virtually every other global stallion operation, chased this horse hard after his impressive win at Royal Ascot and it's fitting he should now retire to the stud where he was born and raised. Without Parole is a beautiful horse with an athletic physique and superb conformation. As his race record states, he's an out-and-out miler who possesses a great turn of foot. Importantly, he has a potent, proven sire's pedigree, which should offer breeders plenty of options. He'll certainly be heavily supported by Newsells Park and of course his Eclipse award-winning breeders, John and Tanya Gunther.”