With Triple-Digit Beyer, Sky's The Limit for Flightline 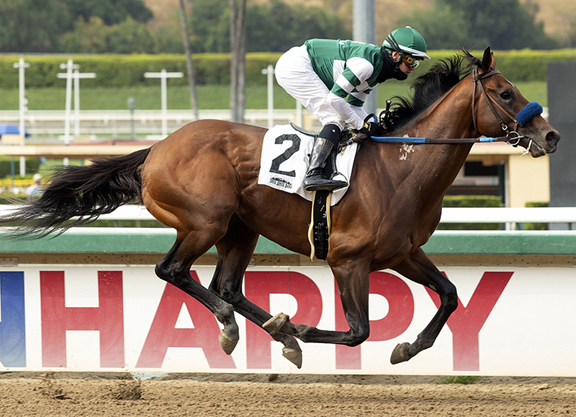 The fastest 3-year-old in training will not be found in the field for Saturday's GI Kentucky Derby.

In one of the most impressive debuts turned in by a 3-year-old colt in years, 'TDN Rising Star' Flightline (Tapit) not only won Saturday's maiden special weight at Santa Anita by 13 1/4 lengths, he earned a 105 Beyer Speed Figure (video). Based on the numbers, that makes him faster than any of the 20 horses lining up for the Derby. His stablemate, Rock Your World (Candy Ride {Arg}), earned a 100 Beyer when winning the GI Runhappy Santa Anita Derby, which gives him the only triple digit Beyer number in the expected field. Life Is Good (Into Mischief) earned a 107 when winning the GII San Felipe S., but has been sidelined.

“We really thought the world of him, but you never really know until they get on the racetrack,” said co-owner Kosta Hronis. “He travels really well. He makes it look really easy and he kind of floats over the track. He does things effortlessly. We think he has a bright future and looks like a special colt.”

Flightline broke on top in his debut and reeled off an opening quarter-mile in :21.59 seconds, but seemed to be going easily. With Flavien Prat aboard, he started to draw away on the turn and kept extending his lead, even though Prat wrapped up on him well before the wire. His final time for the six furlongs was 1:08.75.

“Flavien said he really did it so easily and that he was not even breathing hard,” Hronis said.

Due to the belated debut, Flightline is not in line to run in any of the Triple Crown races. The major summer stakes for 3-year-olds could be on his schedule, but Hronis said that the owners and trainer John Sadler have not mapped out any plans for their rising star.

“He runs so fast, so we'd like to keep things spaced out,” Hronis said. “Since it was just his first race, we'll just see when he's ready to come back. When he's ready to go, I'm sure we can find a 3-year-old colt race where he will fit right in. But, no, we don't really have anything targeted at this point.”

Flightline, a $1-million purchase from the Lane's End consignment at the 2019 Fasig-Tipton Saratoga sale, suffered through a setback last year just prior to when he was scheduled to be sent to Sadler's Santa Anita barn, the reason why he didn't debut until Saturday.

“About a week before he was scheduled to come to California, he cut himself,” Hronis said. “He has a scar on his butt on his right hind. They had to stitch him up. It was just something that happened at the barn and nobody really knows what happened or how he did it. But that set him back. Because we always thought he was a special colt, we gave him 60 days off to let him heal up right.”

Had Sadler been more aggressive, he might have been able to get Flightline to the races in January or February, which would have given him enough time to make the Derby. Hronis said that was not anything the connections ever considered.

Over the last many years, the Hronis Brothers have been among the most successful owners in the sport, but most of their biggest wins have come with older horses. Rock Your World will be their first Kentucky Derby starter.

“We bought a lot of nice yearlings in the past, like [Eclipse Award and GI Breeders' Cup Classic winner] Accelerate (Lookin at Lucky),” Hronis said. “They just came around a little slower. Rock Your World developed and matured a little faster than ones we've had in the past. We haven't changed our buying or training philosophy. These ones just happened to come along faster than ones we've had in the past. To get a 3-year-old to be able to run a mile-and-a-quarter the first week in May is not easy.”

Bloodstock agent David Ingordo said he had had his eye on him for some time before signing the ticket at Saratoga.

“Lane's End handles a lot of the sales for Jane Lyon out at Summer Wind,” said Ingordo. “We went out shortly after some of her yearlings turned a year old, in February or March of their yearling year and they were showing us a chestnut Tapit colt out of American Pharoah's dam who turned out to be Triple Tap. And there was a chestnut and a bay, and I kept looking at the bay, and they said you need to look at the chestnut, because the bay is the one she's thinking about keeping. We went back a few times through the spring, and the bay one was the one I always liked.”

Fast-forward to August, and Ingordo was on a Tex Sutton plane with a load of horses when they hit turbulence.

“The guys asked if I could go back and grab a horse, so I grabbed the first horse and I was standing there and I looked at him and said, 'oh, there you are.' I only realized he was there when I was holding him on the plane. He was an expensive colt, but it all worked out in the end.”

Spending $1 million on a yearling is also something that hasn't been in the Hronis playbook.

“We spent that much money because we knew we were going to partner up,” Hronis said. “The seven figures was not just us. We would never do that by ourselves. It's too big of a risk. I've seen a lot of $1-million horses in $20,000 claiming races. The fact that the breeder, Summer Wind, stayed in is important. That showed that they believed in him, too. When you have partners like we do, it's easier to absorb that kind of horse.”