Home » Archive » Shared News » With Strength in Numbers, Repole and Viola Hope to Hit It Out of the Park

With Strength in Numbers, Repole and Viola Hope to Hit It Out of the Park 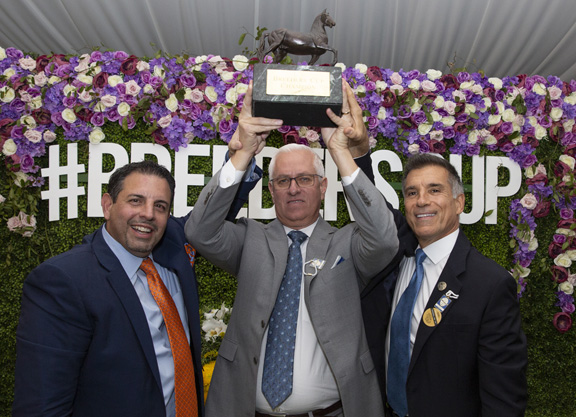 Passionate about the sport and determined to win at the highest level, partners Vinnie Viola and Mike Repole have come up with a formula they hope will mean lasting success. It's not just about quality, but quantity. Attack the game with an army of well-bred horses, most of them colts, send them to Hall of Fame trainer Todd Pletcher and sit back and wait for good things to happen.

In what amounts to a historic buying spree, Repole and Viola's St. Elias Stable bought 43 yearlings at Keeneland September, paying a combined $16.045 million. That's after they spent $1.375 million on two yearlings at Fasig-Tipton October and one at Fasig-Tipton Saratoga for $350,000.

Represented by bloodstock agent Jacob West, the Repole-Viola partnership bought 40 colts at Keeneland and three fillies, paying anywhere from $40,000 for a colt by Always Dreaming to $1.05 million for a City of Light colt. They went after a number of sires, including four by Curlin and three by City of Light. The average price they paid was $373,000.

It's all about putting yourself in a position to win at the highest levels of the sport, something both have achieved. They teamed up to win the 2019 GI Breeders' Cup Classic with Vino Rosso (Curlin), a horse they bought at the 2016 Keeneland September sale for $410,000. Viola owned 2021 GI Florida Derby winner Known Agenda (Curlin) and was a co-owner of 2017 GI Kentucky Derby winner Always Dreaming (Bodemeister), while Repole campaigned, among others, GI Breeders' Cup Juvenile winner Uncle Mo (Indian Charlie) and GI Travers S. winner Stay Thirsty (Bernardini).

At the end of the day, it's not necessarily about the bottom line, but a thirst to win in a sport neither can get out of their systems.

“We've developed a passion,” said Viola, who owns the NHL's Florida Panthers. “It's less market driven. It makes sense on a sportsman's level. Every sports person wants to compete at the highest level at whatever activity or sport they participate in.”

Viola is from Brooklyn and Repole is from Queens. Both used Pletcher as their primary trainer and have similar goals and philosophies when it comes to the sport. It made their teaming up natural. As a partnership, their first big splash at the sales came at the 2020 Keeneland September Sale, where they bought 23 horses for a total of $9.295 million.

They are not just spending a lot of money, they are trying to spend a lot of money wisely. It starts with a team of advisors that includes West, Pletcher, Ed Rosen, Jim Martin, Rory Babich and Monique Delk. Each one has their strengths. Their information is passed on to Viola and Repole, who continue the hunt to find the next Vino Rosso.

“This is not an easy task” Viola said. “This is part art, part science, part team discipline. Mike and I are constantly communicating about those three challenges. It is very, very easy when you have a partner like Mike. He is an ultra-talented individual. We work really well together.”

Buying mainly colts is part of that plan. For Viola, it comes down to trying to win another Kentucky Derby.

“We are primarily buyers of colts,” Viola said. “The sole purpose is to win what we think is the Super Bowl of horse racing , the Kentucky Derby. You will see us buying 90% plus colts.”

Repole wants to win his first Derby, but he also wants to develop stallions, another reason why the two buy very few fillies.

“It's driven by having colts and driven by having stallions,” he said. “The one thing that Vinnie and I figured out pretty quickly is that the ability to make money in this game is with stallions. I still own a big percentage of Uncle Mo. His stud fee is $175,000 and he's bred every year to 200 mares. Anyone can do the math.”

“It's a numbers game” he said. “What Vinnie and I are trying to get is quality and quantity. That's what we are looking for. If somebody wants to go up to $2.7 million, God bless and good luck. Vinnie and I will never buy the sales topper because there's always going to be one horse that goes for $4 million and everyone says, 'Wow, look at that horse.' A couple of years later tell me what that horse did.”

The relationship has grown over the years. In 2016, the year they bought Vino Rosso at Keeneland, Repole and Viola went in on only two horses together. Repole said the success they had with Vino Rosso cemented the partnership, which has come to be more than just a business relationship. It has become a close friendship.

“Vinnie and I have gone from partners to great friends to family over the last 12 years,” Repole said. “There's no doubt I'd rather own 50% of a great horses with Vinnie than own 100% of as great horse by myself. It feels more special that way.”

Buying yearlings is never easy and there are no guarantees, but there is something to be said about having such a deep group of horses. So they hope to make some memories in the years ahead, starting next year when the 2021 yearling class hits the track and continuing in the 2023 Kentucky Derby. From the 2021 yearling buys, they'll have 46 chances to find a star. The odds are in their favor.