With Demand to the End, Keeneland September Sale Concludes 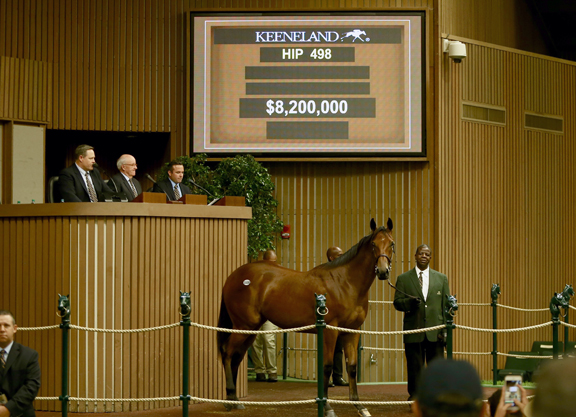 “I'm very pleased with how the sale went,” Keeneland Vice President of Racing and Sales Bob Elliston said as bidding was winding down Sunday afternoon. “We're off on our gross, but with 500 fewer horses in Book 1 and Book 2, it was expected. Our average is going to be right on par with last year, our median is right on par, so that really speaks to the strength of the catalogue that was offered, in terms of the quality we had with those fewer horses up front.”

Keeneland opened the September sale with reformatted Book 1 and 2 sections and 516 fewer horses catalogued in the auction's opening elite sessions, as the sales company responded to requests from buyers to have more time to view the quality horses.

The fine-tuning led to an action-packed Book 1 finale last Wednesday, which saw eight horses sell for over $1 million during a day of persistent bidding that ended with a session average of $524,855 and a median of $375,000.

“We've received positive feedback from horsemen about the format change, and we are pleased with the consistently strong level of trade it generated throughout the sale,” Elliston said. “Buyers suggested we catalog fewer horses up front and we responded. By making that change, we extended the quality farther into the sale and created momentum for the second week.”

Twenty-two yearlings sold for seven figures at the 2019 September sale, down from 27 a year ago, and million-dollar offerings were purchased by 14 unique buying interests.

“There were a lot of different entities with a lot of money, so that was great to see,” said bloodstock agent Marette Farrell, whose purchases during the auction included a $1-million son of Candy Ride (Arg). “I think there was a much better concentration of good horses in Book 1. It really got the energy going. It helped the market [in later books]. The buyers realized they had to step up if they wanted the horse.”

The obvious belle of the September ball was a half-sister by Triple Crown winner American Pharoah to Beholder (Henny Hughes), Into Mischief (Harlan's Holiday) and Mendelssohn (Scat Daddy). Bred and consigned by Clarkland Farm, the yearling sparked a spirited bidding duel that held the sales pavilion spellbound before Mandy Pope of Whisper Hill Farm ultimately outlasted Sheikh Mohammed's Godolphin to secure the prized filly for $8.2 million. The yearling became the highest-priced filly to ever sell at the September sale and the co-fourth-highest price ever paid at the auction. It was the highest price at the September sale since the $11.7 million given for Meydan City in 2006.

Using seven consignors, Barbara Banke's Stonestreet Bred and Raised sold 48 horses throughout the sale for $16,790,700, among them four seven-figure horses led by the $4.1-million Curlin colt consigned by Eaton Sales

“Book 1 was very strong and demand persisted into the later books,” Banke said. “Well-bred, attractive individuals were particularly sought after. International buyers were enthusiastic participants. Overall the market was strong.”

September is often considered a bellwether sale for the industry and Elliston said he saw many positives in the auction's results.

“If you look at the domestic buyer who is acquiring horses to put into racing in the U.S., clearly rising purses in places like Kentucky and New York are indicative of a strength in the top end of the marketplace,” Elliston said. “I think the American-bred horse is also in considerable demand across the world. When you look the top 10 buyers, probably half of them were from another country. I think that speaks volumes about what Kentucky and American breeders are producing and how in demand those horses are. I know we've had some dark clouds on the racing side, we need to fix those and there are efforts underway to do that, but I think the September bellwether yearling sale says there are a lot of positive things going on with the American breeding industry.”

While agreeing the September results look strong, Taylor Made Sales Agency's Duncan Taylor continued to see polarization in the marketplace.

“I think the market is strong, but is it a signal that all the stallion guys can start raising stud fees? No,” Taylor said. “It's not like that. If you have a good horse, you get rewarded, but breeders have a tough job. It's not an easy thing to do, to breed a horse who looks good and passes all the vets and sells good. If you breed 10 horses and you get three that are like that, you're lucky. I think it's a good market and the statistics show that, but I think that it's still challenging. It's not easy to make money breeding horses. I thought this year that, for a good horse, you got more money, and for an average horse, you got less. I think the market is still polarized, but it was a good sale.”

Sheikh Mohammed al Maktoum made his first appearance in nearly a decade at last year's September sale and his Godolphin operation was far and away the auction's leading buyer. The Dubai ruler returned to Lexington two days before the start of the 2019 September sale and Godolphin again dominated the results sheets in Book 1. Godolphin purchased four of the seven yearlings sold for $2 million or over at the auction. Overall, the operation purchased 10 horses for a total of $16,000,000. A year ago, Godolphin purchased 27 yearlings for $19,960,000.

“Both Sheikh Mohammed and Sheikh Hamdan are strong supporters of the September Sale,” Elliston said. “Their participation is not only an economic benefit for Keeneland, but for all they've done for racing, it is an honor for us to have them attend the sale. When they go to the commercial market, Keeneland is their choice for yearlings. That's a badge of honor for us.”

Coolmore's M.V. Magnier had made the highest bid at the three previous September sales, and, while that string was broken in 2019, Magnier was active in bidding as part of several partnerships. Ultimately, Magnier's name was on 10 tickets for a total of $7,805,000, led by a $1.5-million son of Medaglia d' Oro purchased in partnership with Repole Stables and Vinnie Viola.

In another prominent partnership, the China Horse Club bought 13 yearlings: three on its own and 10 with WinStar Farm's Maverick Racing for $6,275,000. The partners went to $900,000 for a colt by Quality Road and spent $510,000 for another son of Quality Road who topped the sixth session.

“I'm happy with that, but I still see room for us to improve,” Taylor Made's Duncan Taylor said. “You continue to learn and adjust and do things better. I think we are doing a really good job, but I think we can get even better at what we're doing. It's always a challenge for the next year to try and do it again, but we are blessed to have really good customers who trust us with their horses.”

Taylor Made sold four seven-figure yearlings, led by a $2.1-million colt by Pioneerof the Nile (hip 519) purchased by Mike Ryan on behalf of e Five Racing.

Triple Crown winner American Pharoah, bolstered by the auction's $8.2-million topper, led all sires by gross at the September sale. The Coolmore stallion had 55 yearlings sell for $437,164. He was the fifth leading sire at the sale in 2018. Following a remarkable run of racetrack success this summer, Spendthrift's Into Mischief was second leading sire by gross with 68 sold for $23,438,000.

Nine stallions were responsible for the 22 million-dollar transactions, with Hill 'n' Dale's Curlin represented by five. Medaglia d'Oro had four seven-figure sales and the late Pioneerof the Nile had three. American Pharoah, War Front, Tapit, and Union Rags all had two, while Empire Maker and Candy Ride (Arg) had one each.

Frosted was the leading freshman sire by gross, with 44 yearlings selling for $10,025,000. Runhappy led freshman sires by average price, with his 39 yearlings averaging $242,872.

“The new format worked very well,” Keeneland Director of Sales Operations Geoffrey Russell said. “Book 1 was a sale within itself. It had great energy to it. There was more energy on the grounds the weekend prior to the start of the sale than I've seen in a long time. It had a great buzz going into it. Having fewer horses in Book 2 really set that sale up very well and helped Book 3.”

Taylor Made Sale Agency's Duncan Taylor agreed the 2019 format worked, but he said he is hoping for a more consistent level of Book 1 quality horses in the future.

“I think the sale format was good this year,” Taylor said. “I think the people who sold million-dollar horses in Book 2, I think we should try to get all of those horses in Book 1. That keeps the momentum going. Some people have to put horses in Book 1 that might not be quite Book 1 horses. That sort of slows down the momentum of the sale. But I think we're getting closer to that all the time. I think the three-day Book 1 worked well. People had time to look at the horses and I think both the sellers and the buyers were happy. So I think Keeneland has it right. Hopefully, they'll keep it this way for several years to come.”

A colt by Temple City sold to LEG Group for $55,000 to top Sunday's final session of the Keeneland September sale. Bred by Haymarket Farm and consigned by Vinery Sales, hip 4414 is the first foal out of Amizzen Grace (Yes It's True), a half-sister to group placed Enforce (Kalanisi {Ire}). Amizzen Grace, carrying a full-sibling to the yearling, sold for $21,000 at this year's Keeneland January sale.