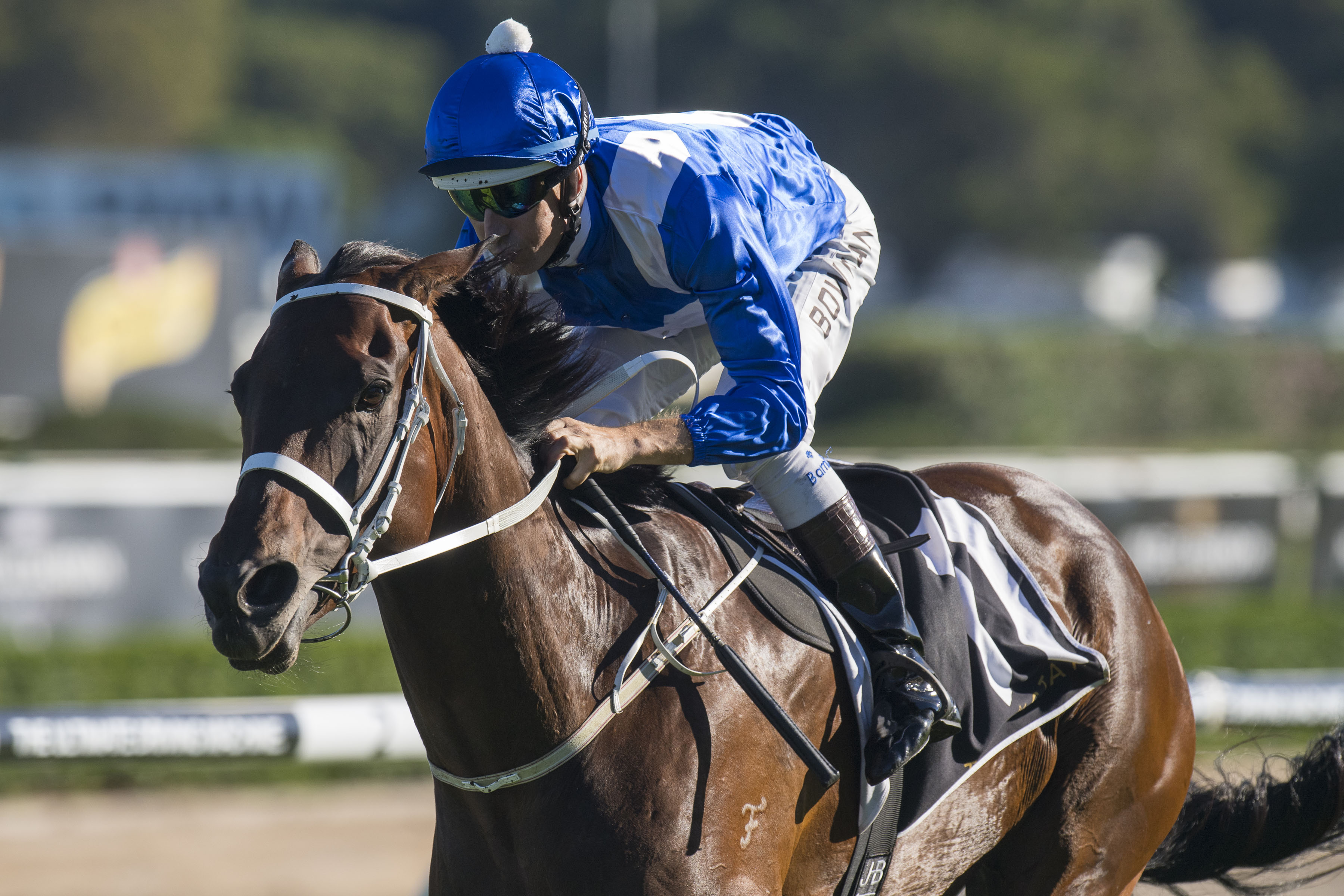 Winx (Aus) equaled the 19-race win streak recorded by another great daughter of Street Cry (Ire), the 2010 Horse of the Year Zenyatta, with a hands-and-heels one-length win in Saturday's G2 Chelmsford S. at Randwick in Sydney.

At this point, many rivals of the two-time G1 Cox Plate winner may have conceded that extreme tactics may be the only way to beat Winx, and that is certainly the stance jockey Josh Parr took when steering Red Excitement (Aus) (Excites {Aus}) straight to the lead from the barriers. As the field passed the 600 metres Parr suddenly booted Red Excitement 10 lengths clear, and Bowman was scrubbing on Winx back in fourth to make up ground well before they turned into the straight. Connections of Winx admitted to some anxious moments in the stretch as the $1.09 favourite carved into Red Excitement's lead, especially after Bowman dropped the whip; however, as per usual, the rider didn't need that assist. Winx, the world's highest-rated mare and turf horse, hit the front inside the 50 metres and won by a cozy length (video).

“He certainly made a race of it,” Bowman said of Parr. “He left no stone unturned. I was comfortable in the first quarter of the race but I could see what was happening so I started to make my way a bit closer from the 900 metre mark but I still had to stay within myself. At the top of the straight I wasn't worried last start but today I really was. What she did today was incredible, I mean everything she does is incredible but I'm lost for words. I was concentrating on just keeping her balanced but when she hit the afterburners at the 150 metre mark today, I just can't explain the feeling.”

Trainer Chris Waller added, “They turned the race on. I guess they tried to break us up. It's never what you like to see when you've got a horse like her chasing but fair play to them. [Red Excitement] held on and ran second–it didn't fall out and run last. It just proved that she is at her best and it's pretty hard to beat a horse at its best.”

Waller admitted he shared Bowman's frayed nerves at the top of the stretch.

“With 400 metres to run I thought I was more concerned today than I was first up,” he said. “I thought she was going to get there quite easy first up with her momentum but it is hard to gauge when you have a horse free rolling like that. He hasn't had a soft section but credit to the second horse. He's not a bad horse. She pulled them back pretty well at the finish.”

Parr added of his part in the dramatic finish, “I thought I had pulled off the miracle ride. I thought I was off and gone and when I had a look at the big screen she was nowhere near me. There was only one way I could possibly win and that was to be very bold so that's what I did. I thought I was home at the 200 metres. I was such long way ahead of them and still flying but Winx is a freak. It seemed just a few strides later she was gobbling me up. She is just a freak of a horse but my bloke is in red hot form. Today he has just run into possibly the greatest ever.”

While Zenyatta was beaten in her 20th and final career start when a head second in the GI Breeders' Cup Classic (video), Winx will be a heavy favourite once again to extend her streak next up in the G1 George Main S. on Sept. 16. And while Winx is not unbeaten, having won just four of her first 10 starts before embarking on her current blitz back in May of 2016, she has six wins to go before equaling the unbeaten 25-0 record of the great Australian sprinting mare Black Caviar (Aus) (Bel Esprit {Aus}).

Also at Randwick on Saturday, the Coolmore-owned, Lindsay Park-trained 3-year-old filly Formality (Aus) (Fastnet Rock {Aus}) set herself up for a tilt at the G1 Golden Rose S. on Sept. 23 with a win in the G2 Furious S. as the $2.35 favourite (video). Redzel (Aus) (Snitzel {Aus}) strengthened his claims for The Everest on Oct. 14 with a two-length win over Spieth (NZ) (Thorn Park {Aus}) in the G3 Concorde S., a tactical four-horse sprint, but he needs a slot holder to secure him for the A$10-million race (video).

In the card opener, A$1.6-million yearling Merovee (Aus) (Frankel {GB}) finished second as a $15 chance in a 1300 metre handicap (video). The Chris Waller-trained colt had broken his maiden at second asking when last seen on Aug. 15.