Winner for Whitney a Fitting Way to Kick off Saratoga 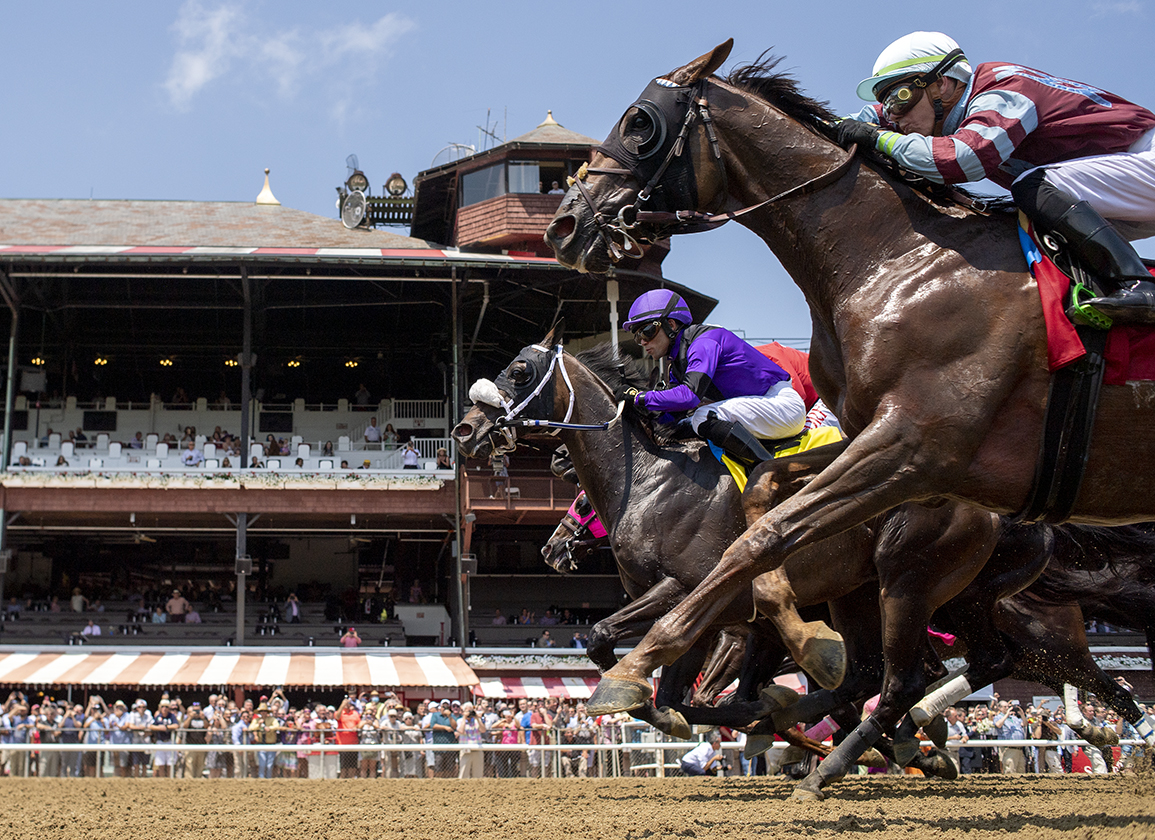 Pretty Birdie (Bird Song), bred and owned by Marylou Whitney Stables, struck just the right emotional note–bridging the past and the present–with her gate-to-wire victory in the 103rd running of the GIII Schuylerville S.

“It's a little bittersweet. I wish she was here,” Whitney's husband John Hendrickson said. “She would love this. Saratoga is open and she's won a race. Things are the way they should be. The only thing missing is her.”

The six-furlong Schuylerville for 2-year-old fillies, a staple on opening day since the 1950s, was trainer Norm Casse's first stakes win at Saratoga.

Whitney was a hugely influential and beloved figure during her many decades in Saratoga. She was a tireless promoter of racing and the city, staged famous parties and was a major philanthropist.

Following her death at the age of 93, Hendrickson said there was never any question that he would keep her stable operating and maintain its bloodlines. Pretty Bird is inbred to Whitney's champion broodmare, Dear Birdie, three by four. Hendrickson said the Schuylerville was the stable's first stakes win at Saratoga Race Course since Birdstone won the 2004 GI Travers S.

“This where she felt the most alive. I wanted to keep her alive,” Hendrickson said. “This is the way she is alive. She has a win on opening day. It's pretty special.”

Just before the Schuylerville, heavily favored Golden Pal (Uncle Mo) turned a jaw-dropping performance to win the GIII Quick Call S. in hand. It may turn out to be one of the standout performances of the 40-day season, but the Whitney connection made Pretty Birdie the star of the day.

Saratoga's fans certainly did not lose their form during the COVID-19 summer of no-spectator racing. There was a crowd of approximately 100 people outside the gates on Union Avenue at 5:30 a.m., some 90 minutes before they were to open. In short order, the picnic tables and other public spaces in the backyard were claimed. Everyone had to leave when training and the trackside breakfast ended at 10 a.m. When the gates re-opened an hour later, the place filled up and the Saratoga party was on.

In the hour before the first post, traffic was near gridlock conditions around the track, standard for Saratoga on big days.

“It feels like a reunion, because I've run into all these people and everybody hollers, 'Hey, good to see you and where you been?' It's been fun,” trainer Kenny McPeek said. “I've seen a long list of people and familiar faces. It seems like everybody's in good spirits and gives you another level of appreciation of the place.”

Robertino Diodoro's Charlie'sarchangel (Archarcharch) captured the first race of the day under champion jockey Irad Ortiz, Jr. Diodoro, who lost the 5-year-old in a claim, also won the first race on opening day in 2018. He acknowledged the stark difference from the 2020 season.

“The whole atmosphere from last year to this year,” he said. “It means a lot to everyone, especially the riders getting more into the game. It's good to see for the whole town.”

Ortiz, the leading rider at the Spa last year, said he relished the return to the pre-pandemic norm of people, noise and energy at the track.

“There's no words for it,” he said. “Last year was very sad; a lot of things happened. I really missed the fans. I feel very excited to get them back. It's great. I'm so happy to be back and we're happy they can be back at the racetrack.”

“The first thing I said to Jose when I saw him in the paddock is 'How incredible is it to have fans back here?'” Sisterson said. “It not only is good for business, but it's good for everything worldwide to get back to normal, back to reality. It was tough times for everyone. Thankfully, we all sort of got through it and hopefully there are quite a few things to look forward to.”

Harry Rice has been a jockey valet at the NYRA tracks since the mid-1970s and his experience enabled him to provide some perspective.

“It's been tremendous, just the atmosphere,” Rice said. “The people are so happy to see everybody. It's been a long two years and this place is alive again. It's great. It's one of the best opening days I've ever had and I've been here 46 years.”

“Rice worked the 2020 season and described it as being eerie. He said he started Thursday, with a visit to the backstretch, which was off-limits to him last summer and began re-connecting with people.

“It was just so nice,” Rice said. “It reminds you of why you love Saratoga.”