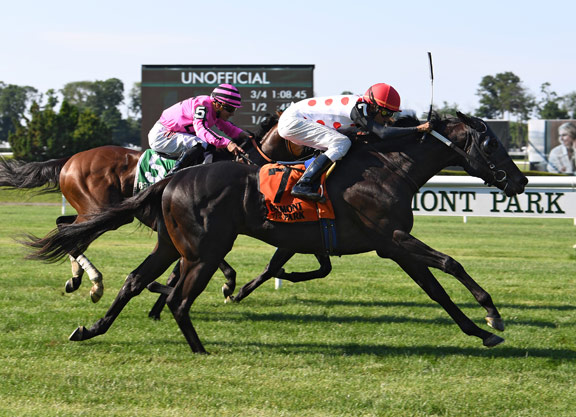 Win Win Win showed a liking for the turf Thursday, rallying late to take Belmont's Manila S. in his first try on the sod after competing on the Triple Crown trail all winter/spring. The 4-1 shot caboosed the field early as 32-1 shot Ian Glass (Hard Spun) carved out splits of :22.77 and :45.29. Swung out to the center of the course turning for home, the dark bay gobbled up ground in the lane, surging past Grade I winner Fog of War in the final strides to score.

“This was an experiment [running on turf],” said winning trainer Michael Trombetta. “I really didn't know how it was going to end. I did work him on it. He works decent on the synthetic and he worked OK on the turf at Laurel. It looked like he got over the ground well. We didn't put any pressure on him, but he handled it well and we were happy with him. We wanted to see what it was all about and get him started, but we'll take him one race at a time.”

Opening his account with a pair of wins at Laurel last term, Win Win Win checked in second in that venue's Heft S. in December and kicked off this term with a dominant score in Tampa's Pasco S. in January. Third in the GII Tampa Bay Derby Mar. 9, he was second in Keeneland's GII Toyota Blue Grass S. Apr. 6. Crossing the line 10th in the GI Kentucky Derby May 4, but promoted to ninth via DQ, the Florida-bred was seventh last time in the GI Preakness S. May 18. Win Win Win is the most recent foal out of Miss Smarty Pants, who is a half to GSW Unbridled Humor (Distorted Humor). Click for the Equibase.com chart or VIDEO, sponsored by Fasig-Tipton.