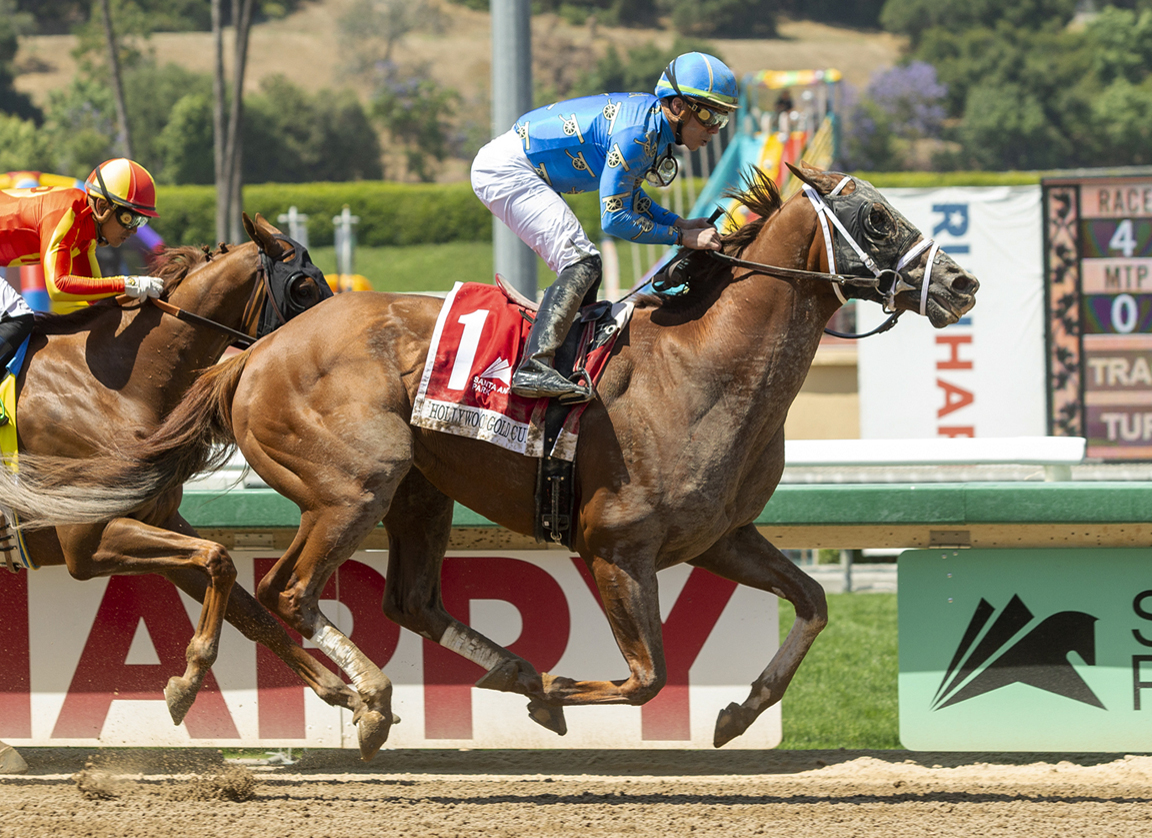 There Goes Harvard, the second-longest shot in a field of five, pulled off the upset under invading rider Irad Ortiz, Jr. in the GI Hollywood Gold Cup S. Monday at Santa Anita.

Taking six starts to break his maiden, doing so on the Ellis turf last summer, the chestnut was second in the Runhappy Ellis Park Derby on the main track two tries later. Runner-up off a seven-month layoff in a local dirt optional claimer Mar. 19, the homebred dead-heated for the victory in a similar spot Apr. 17 before capturing a local turf allowance May 14. Settling last at the rail behind dueling Defunded and Stilleto Boy (Shackleford) through a sharp :22.72 quarter, There Goes Harvard moved up a spot as the half went up in :46.13. Creeping into third going by six furlongs in 1:10.99, he swung into the three path for racing room approaching the stretch, sidled up to Defunded entering the final furlong and proved best in deep stretch for the victory.

“I was pretty excited, when I saw him stick his head in front coming to the three-sixteenths pole, I got a little emotional but things just worked out properly,” said winning trainer Michael McCarthy, who notched his first Gold Cup win, as did Ortiz. “Small field, you have to take a shot. The horse is doing well and sometimes you just have to take a chance. I just can't thank Irad enough here. Every body involved, my grooms, my guys, everyone in barn 59, big day. The way things are going lately, it's nice to get a win anywhere, but yes these are the kinds of races you get up for in the morning. You hope you are lucky enough to participate in, let alone win.”

“I had a perfect trip,” said Ortiz, who shipped in for the Memorial Day card from his Belmont Park base. “My horse was fighting a little bit with me going into the first turn, they went a little fast. I tried to let him relax, settle a little bit and he did come back to me on the backside. That was the key, after that, I was just biding my time and kicked him out down the stretch and he responded really well.”

Pedigree Notes:
With the victory, There Goes Harvard becomes the first Grade I winner for Three Chimneys' Will Take Charge, as well as his 11th stakes winner and fourth graded stakes winner. He is the first black-type performer from three foals to race out of his dam, a half to two stakes winners out of GSW Michigan Bluff. Third dam Middlefork Rapids was a GSW as well. Soul Crusader, who sold to Bud Petrosian for just $22,000 at Keeneland January in 2020, was represented by a juvenile Nyquist colt who sold for $700,000 to Zedan Racing at Fasig-Tipton Gulfstream after breezing a furlong in :9 4/5. She produced a filly by Sir Prancealot (Ire) this season.