Who's Your Favorite Horse? Bob Fierro 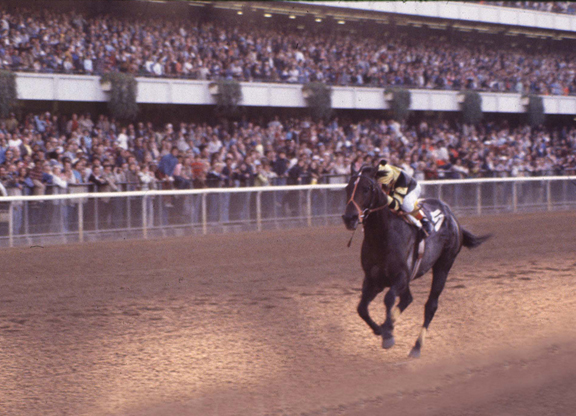 Favorite: I was a 12-year-old from Queens who was a horrible athletic prospect, but who loved racehorses. When a t.v. station broadcast the Bluegrass S. at Keeneland won by a diminutive colt named Round Table who scorched his way to a track record, he pierced his way into my heart. I checked his pedigree and decided he was the best-named horse ever (*Princequillo–*Knight's Daughter, c'mon!) because he came along when I was in school wallowing with joy through the Arthurian legend. However, I was devastated when he could not gain ground late and finished a close third to Iron Liege and Gallant Man in the Kentucky Derby (but beat Bold Ruler, whom I never liked, sue me). But my hero soon redeemed himself by taking to the weeds to become the first great turf champion of the post-war era, winning that pre-Eclipse title at three- four and five and Horse of the Year in between. That he could not stand up on a sloppy track and lost key races late in each year on the dirt did not dull my ardor–he always delivered when he needed to redeem himself and he kept me interested in the game. He was my Holy Grail in that respect. In the mid-1980s as a turf writer I had the opportunity to pen an article about him and visited Claiborne to see him. They took the old man out of his stall, he was a bit gaunt and wore a muzzle, but he turned his head and looked at me and I could swear he winked.

The Best Horse: Not many prognosticators, fans or handicappers can watch an impressive debut performance by a 2-year-old and fearlessly predict that the colt would become one of the best of all time. However, a few days after picking my jaw up from the ground after witnessing such a debut by Seattle Slew, I had lunch with a potential client (I was in the public relations business at the time) who, it turned out, was a very big punter with astonishing insights about horse racing for a man around 30 years of age whose life was real estate. He asked me if I'd seen the Seattle Slew race and when I nodded he said flatly: “He will win the Triple Crown, he's the best horse since Secretariat and may be better.” He was, IMHO, absolutely correct and I found every one of Seattle Slew's efforts to be the quintessential acts of speed, courage, and absolute determination we dream about when we are wishing upon a future star. That he is the one that saved the Bold Ruler line through A.P. Indy is the cherry on the top.