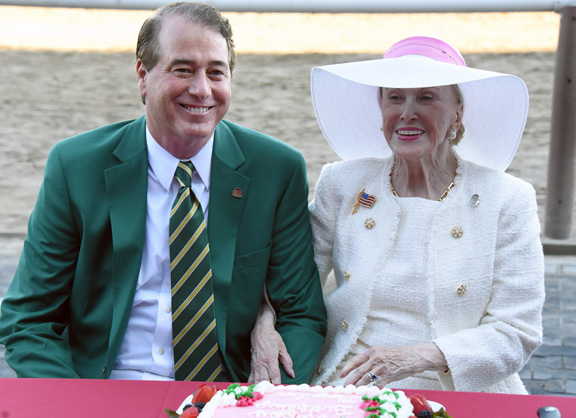 Among the offerings up for auction are a diamond choker necklace and a pristine 1985 red Jaguar XJ6, as well as couture ensembles and cocktail dresses by Bill Blass, Arnold Scassi, and Chanel; evening purses by Judith Lieber Couture and Chanel; fur coats; hats; vintage dresses; and designer scarves by Hermes and Tiffany.

The website, www.MarylouWhitneyCollection.com, debuts Wednesday at 10 a.m. for preview only. The auction begins Monday, July 27 at midnight and continues through Saturday, Aug. 1, at 11.59 pm: Whitney Day at Saratoga Race Course. Bidding and “Buy It Now” options will be available.

“As I began the difficult task of going through Marylou's personal items at each of our homes, she seemed to speak to me,” Whitney's husband John Hendrickson said. “No one shared her blessings and good fortune more than Marylou. No one was more dedicated to helping charities than Marylou…and so the idea was born. Her spirit of giving will live on–Marylou's personal items are going for a greater good.”

Saratoga Hospital President and CEO, Angelo Calbone added, “Once again, Saratoga Hospital owes a debt of gratitude to Marylou–and to John, who chose us as a beneficiary of this auction. We know how much the backstretch workers meant to Marylou, and we are honored to play a key role in making sure they continue to receive the care they need and deserve.”

“We were thrilled to learn that John committed to building this new, state-of-the-art facility, as a tribute to the healing spirit that Marylou exuded,” Ruchames said. “The welfare of backstretch workers was so close to her heart, and they loved her. The public's participation in this auction will appropriately honor her legacy of kindness to everyone.”