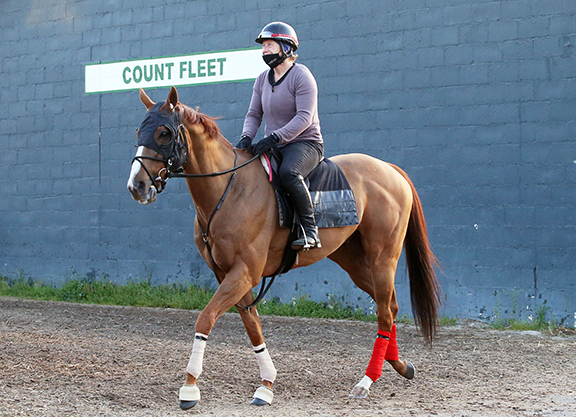 The ageless champion Whitmore (Pleasantly Perfect) will try for an unprecedented fourth victory in the GIII Count Fleet Sprint H. in a competitive seven-horse field Saturday at Oaklawn.

Annexing the Count Fleet in 2017 and 2018, the chestnut ran into a buzzsaw in champion Mitole (Eskendereya) when second in 2019 and gutted out his third score in the race last year. Winless in his next three, he finished his campaign with an 18-1 upset of the GI Breeders' Cup Sprint to earn an Eclipse Award for champion male sprinter. Making his 8-year-old debut in the Hot Springs S., he was just out-gamed by re-opposing C Z Rocket (City Zip) in a neck decision. That runner was second to Whitmore in the Breeders' Cup, stopping a five-race winning streak that began in a $50,000 claimer at Churchill–his first race for trainer Peter Miller–and culminated in a conquest of the GII Santa Anita Sprint Championship S.

No Parole (Violence) scored a convincing victory in the GI Woody Stephens S. last June, but hasn't been quite the same since. The bay was off the board in both the GI H. Allen Jerkens S. and GII Phoenix S. and, after bouncing back to annex a Louisiana-bred stake at Delta Feb. 10, was fourth at 2-5 making his turf debut in the state-bred Costa Rising S. Mar. 20 at Fair Grounds.

Fringe contenders include Strike Power (Speightstown), a one-time graded stakes-winning 'TDN Rising Star' who had fallen off form until dominating a track-and-trip optional claimer with a 101 Beyer Mar. 11, and Empire of Gold (Goldencents), who makes his 4-year-old debut after overachieving when second in the Phoenix and fourth in the Breeders' Cup, both times at 51-1.