Home » Archive » Europe » Where Did They Come From? 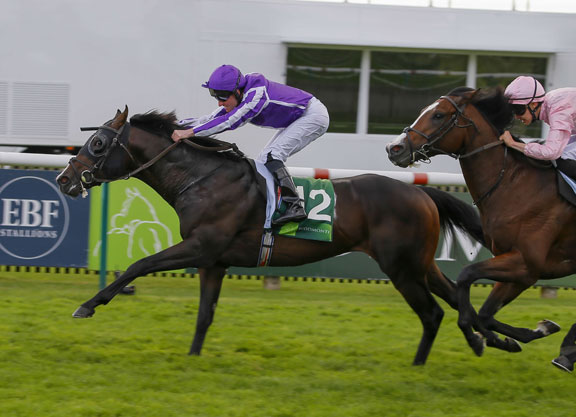 ELARQAM (GB) (Frankel {GB}) was a 1.6-million gns purchase from Tattersalls October Book 1 by Shadwell from the Duke of Roxburghe’s Floors Stud. Elarqam was bred by Floors Stud out of its dual Guineas winner Attraction (GB) (Efisio {GB}), and the G1 2000 Guineas fourth will look to emulate his dam with a Curragh Classic success. B-Floors Farming.

GUSTAV KLIMT (IRE) (Galileo {Ire}) is a homebred for team Coolmore but his dam, Massarra (GB) (Danehill), was bought by connections for 600,000gns in 2009. Massarra, a Group 3-winning sprinter, was bred and raced by Prince Faisal out of his excellent mare Rafha (GB) (Kris {GB}), the dam of sires Invincible Spirit (Ire) and Kodiac (GB). He looks to rebound from a G1 2000 Guineas sixth. B-Orpendale, Chelston & Wynatt.

ROMANISED (IRE) (Holy Roman Emperor {Ire}) will be a longshot for Robert Ng and trainer Ken Condon, but he has Classic performance to fall back on in his pedigree thanks to his half-sister, the G3 St Leger Italiano winner Rock Of Romance (Ire) (Rock of Gibraltar {Ire}), and his dam’s half-brother Designs On Rome (Ire) (Holy Roman Emperor {Ire}), the Hong Kong Derby winner. Romanised did not visit a sales ring as a youngster. B-Mrs Monica Aherne.

SPANISH POINT (GB) (Frankel {GB}) passed through the same Tattersalls ring as his paternal half-brother Elarqam and fell just short of that one’s price at 1.3-million gns when bought by Coolmore and Mayfair Speculators from breeder Cheveley Park Stud. While the colt is still a maiden after three tries, he has a progressive pedigree to fall back on, being out of the G1 Sun Chariot S. and G1 Lockinge S. winner Peeress (GB) (Pivotal {GB}). B-Cheveley Park Stud.

SYMBOLIZATION (IRE) (Cape Cross {Ire}) is a homebred for Godolphin and is the second in this lineup out of a daughter of Pivotal (GB), who is gaining great acclaim as a broodmare sire. The dam, Yorkshire Lass (Ire), is a daughter of German highweight and Classic-placed White Rose (Ger) (Platini {Ger}), who was bought by Blandford Bloodstock carrying Yorkshire Lass for 620,000gns at Tattersalls December in 2007. B-Godolphin.

THREEANDFOURPENCE (War Front) is a homebred for John Magnier’s mother Evie Stockwell, and is a full-brother to her Grade/Group 1 winners Hit It A Bomb and Brave Anna. Threeandfourpence has thus far spent this season as a traveling companion to Mendelssohn (Scat Daddy). B-Mrs E Stockwell.

U S NAVY FLAG (War Front), the 2-year-old champion, looks to rebound from an inconclusive fifth in the G1 Poule d’Essai des Poulains after stumbling while on the lead entering the straight. Like Elarqam, he is also looking to emulate his dam with a win in an Irish Guineas, his dam Misty For Me (Ire) (Galileo {Ire}) having won the Irish 1000 Guineas in 2011. His full-sister Roly Poly was second in the same race last year. B-Misty For Me Syndicate.

WOULD BE KING (IRE) (Lethal Force {Ire}), a €18,500 foal at Goffs November when bought by Finlea Bloodstock from breeder Rockfield Farm, was pinhooked by Mick Buckley’s Buckley Bloodstock at Orby the following year when bought by trainer Ger Lyons for €42,000. He is out of the G3 Leopardstown 1000 Guineas Trial third Smart Coco (Smarty Jones). B-Rockfield Farm.

ZIHBA (IRE) (Choisir {Aus}) was sold by breeder Grange Hill Stud to de Burgh Equine for €62,000 at Tattersalls Ireland in 2016. The G3 Amethyst S. winner is the second in this lineup out of a Galileo mare and represents the highly prolific Danehill over Galileo cross. B-Mark & Caroline Hanly.