Home » Archive » Shared News » When An Ambulance Follows You at Work, the Job is Never Easy

When An Ambulance Follows You at Work, the Job is Never Easy 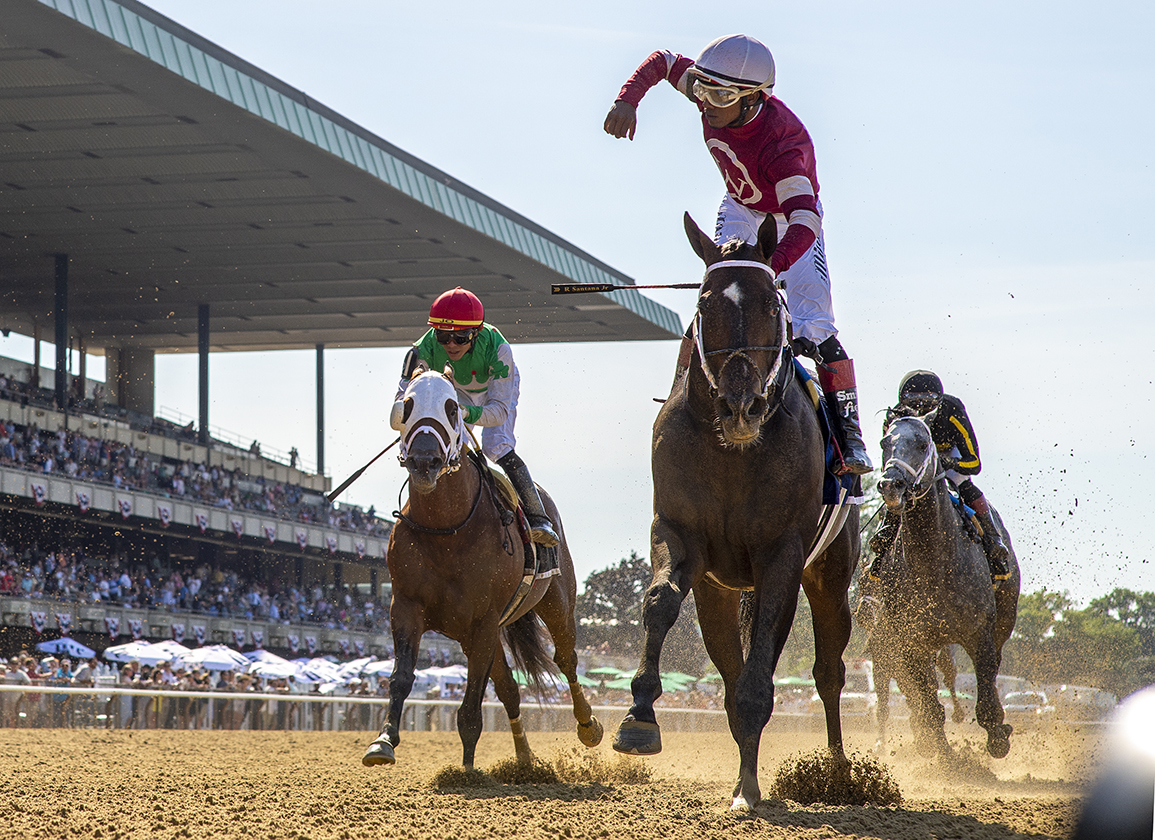 A couple of decades ago, I knew a press box wiseguy who faithfully played what he called “ambulance chaser” bets. Every time a rider got unseated in a spill, he would put two bucks to win on the next mount that jockey rode back. The wagers didn't have to involve an actual ambulance ride–he believed the very act of hitting the dirt and having to dust yourself off might give a jockey extra incentive once he or she got back in the irons. If the jockey sustained an injury that required time on the sidelines, the ambulance chaser would duly note this, putting the rider on a bet-back list to await his or her future return.

I have no idea if this wagering theory turned a profit over time–I seem to recall hearing my friend tout the veracity of his system only when those comebacking riders won. But I suspect he wasn't making ambulance-chaser bets so much for financial gain. He admired and respected jockeys for their tenacity and resilience, and viewed this small form of pari-mutuel support as a way to have a rooting interest in their well-being, perhaps hoping to send some good racetrack karma in their direction.

This gent almost certainly would have backed jockey Ricardo Santana, Jr.'s winning ride aboard 2-year-old firster Cool Papa G (Maclean's Music) in the fifth race at Churchill Downs Friday. It came one race after Santana's mount careened violently through the inner turf rail, leaving him prone on the course while the race got halted midway and declared a “no contest.”

Complaining only of post-spill soreness, Santana was medically cleared to climb back in the saddle. Not only did he win the very next race, but he later boarded a plane to New York to ride six horses on Saturday's GI Belmont S. card.

Irad Ortiz, Jr., on the other hand, would have landed on the ambulance chaser's comeback list after escaping major injury in a scary-looking spill in Thursday's fifth race at Belmont Park. His mount stumbled while switching leads in the stretch, and the thrown Ortiz was run over by a trailing horse ridden by his younger brother, Jose. After being removed from the track on a stretcher and ambulanced to a hospital, Ortiz required only stitches in his head and arm. He vowed to be back riding in two weeks.

So while Saturday's final leg of the Triple Crown turned out to be a worth-the-wait stretch battle that featured 'TDN Rising Star' Essential Quality (Tapit) out-torqueing the relentless Hot Rod Charlie (Oxbow) while 11 1/4 lengths clear of everybody else, the stacked slate of graded stakes on the Belmont undercard was shaped in some ways by Santana's presence and by Ortiz's absence.

Ortiz, currently the continent's leading rider both in terms of victories and earnings, had been booked to ride all 13 races Saturday at Belmont. Horses he was scheduled to ride won the first three races on the day and five of the first seven, including three Grade I stakes (two of which ended up being pickup mounts for brother Jose).

Although Santana had the call aboard France Go de Ina (Will Take Charge), the longest shot in the Belmont S., his main reason for trekking to New York was to ride Silver State (Hard Spun), who quietly cruised into the GI Metropolitan H. after building an under-the-radar, five-race win streak for trainer Steve Asmussen and co-owners Winchell Thoroughbreds and Willis Horton Racing.

The Met Mile has historically been a productive launchpad for horses who weren't quite ready for the rigors of the Triple Crown chase at age three but are poised to peak at four after adding muscle and maturity (Vekoma, the 2020 Met Mile winner, is a prime recent example).

Silver State ($450,000 KEESEP) had dead-heated for a Churchill Downs win in his debut in September 2019 (9 3/4 lengths ahead of the third-place horse), then earned two seconds while taking the 2020 Fair Grounds prep path to an anticipated start in the GI Kentucky Derby.

But Silver State twice couldn't match strides with well-meant winners from the barn of trainer Brad Cox, and when a third in a division of the GII Risen Star S. was followed by a seventh in the GII Louisiana Derby, Asmussen withdrew his colt from Triple Crown consideration and opted to hit the “reset” button after a freshening, aiming for shorter distances. The Met Mile would be Silver State's target for 2021.

Asmussen and Santana got Silver State to New York by racking up back-to-back allowance-conditioned races at seven furlongs in Kentucky last autumn. Confidence mounting, Silver State then rolled into Oaklawn Park to win three consecutive stakes over the winter and spring, stretching out in distance from 1 to 1 1/16 and then 1 1/8 miles while stepping up in class and twice cracking triple digits in Beyer Speed Figures.

Having never faced Grade I company, Silver State was let go at 5-1 in the Met Mile betting, although his elevated mutuel was primarily the product of the zealous crush of money on the Cox-trained Knicks Go (Paynter), the prohibitive 4-5 favorite.

Silver State broke running, but with a revved-up Knicks Go intent on seizing his customary spot at the head of affairs, Santana backed off a beat and let Silver State settle into stalk mode while saving ground at the rail. At one point Silver State slid back to fourth on the backstretch as the cadence quickened (second quarter mile in :22.95, faster than the first), but Santana never panicked and always appeared to have his mount within striking distance.

Knicks Go began to wilt under duress at the top of the lane, and when he drifted out, shouldering Mischevious Alex (Into Mischief) even wider off the bend, Santana cued Silver State to barrel through that gift of a gap. With clear inside passage, Silver State asserted himself for the stretch run, swatting away a late bid from length-back runner-up By My Standards (Goldencents), with the plucky Mischevious Alex still chugging along another three-quarters of a length back in third. Knicks Go finished a drained fourth.

Saturday's Met Mile win (100 Beyer) was the third in the last four years for the training and riding tandem of Asmussen and Santana. They scored in the 2018 edition of North America's most prestigious one-mile stakes with Bee Jersey and in 2019 with Mitole (they didn't have an entry in the 2020 renewal).

Coincidentally, two races later in the Belmont S., Santana and France Go de Ina ended up pressuring Mitole's little brother, Hot Rod Charlie, in the early stages of the race. This tactic contributed to the sizzling early fractions and kept presumed pacemaker Rock Your World (Candy Ride {Arg}) from being able to clear the field from post seven–although this run-and-gun move did nothing for the chances of France Go de Ina, who got eased back to last.

Santana stuck around and rode the two late races after the feature, winning the 12th with a pickup mount. The finale didn't go off until 8:06 p.m., and the pandemic-capped crowd of 11,238 had thinned considerably by the time the starter sprung the latch for race 13.

Just as the gates opened, Kendrick Carmouche's mount reared in stall two and the two parted company, with Carmouche falling underneath his horse, his right ankle absorbing the full force of a hoof plant.

The loose horse ran riderless through the pack while Carmouche–not knowing he had two broken ankle bones–managed to make it to safety under the inner rail before the field came thundering down the turf course stretch. For the second time in three days, there was the disquieting scene of Belmont Park jockeys sprinting out to the scene of an accident to check on a fallen rider.

Sunday, supported by crutches outside the Belmont jockeys' room, Carmouche, currently North America's eleventh-leading rider in both wins and earnings, was optimistic he'd be back in about eight weeks.

“I ain't missing nothing,” Carmouche said, flashing a characteristically optimistic smile. “I'll be back, better than ever.”

Put him on your ambulance chaser list for midway through the Saratoga season.