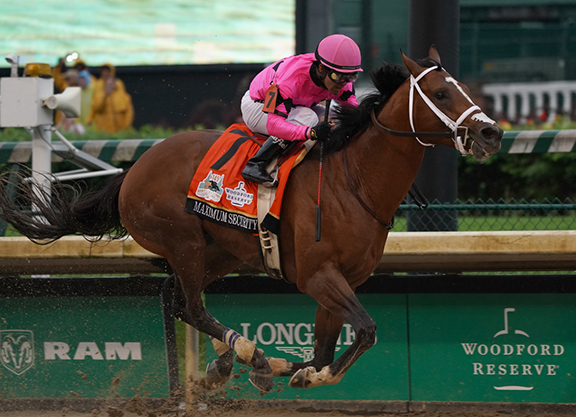 Maximum Security in the Derby |Horsephotos

Gary West, who co-owns the disqualified GI Kentucky Derby winner Maximum Security (New Year's Day), said on Monday an appeal is in the pipeline after a federal judge on Friday dismissed his civil rights lawsuit that sought to overturn the foul ruling that cost his colt the first leg of the 2019 Triple Crown.

In a statement emailed to press members by his media liaison, West used terms like “un-American,” to describe his displeasure at the court-backed stewards' adjudication process, likening what he has experienced to “secret and unreviewable actions by state actors” that are reminiscent of “totalitarian regimes in third world countries.”

On May 14, West, who co-owns Maximum Security with his wife, Mary, sued the three stewards assigned to Churchill Downs, plus the 14 board members and the executive director of the Kentucky Horse Racing Commission (KHRC), based on allegations that “the final [Derby] order is not supported by substantial evidence on the whole record” and that the DQ violated the plaintiffs' Fourteenth Amendment rights. On June 8, the defendants filed a motion to dismiss the suit.

On Nov. 15, United States District Court Judge Karen Caldwell agreed with the defendants that the lawsuit should get tossed out. She wrote in her court order that “Kentucky's regulations make clear that the disqualification is not subject to judicial review. Further, the disqualification procedure does not implicate an interest protected under the Due Process Clause of the U.S. Constitution. Accordingly, the Court must grant the motion to dismiss.”

After taking the weekend to mull his options, Gary West issued the following statement on Monday:

“Stewards' decisions are of momentous financial and intangible importance to owners, breeders, trainers, jockeys, and the betting public. The transparency and reviewability of decisions by stewards is essential to the integrity of racing in America and is critical to the public's confidence in the sport.

“Sadly, the Court's Opinion allows secret deliberations by Kentucky's stewards that affect millions of people and billions of dollars to forever go unreviewable by any court; indeed, by anyone, no matter how negligent, reckless or nefarious such secretly-made decisions may be.

“The opportunities for abuses under such a bizarre and un-American system are self-evident. This is an outrageous state of affairs that does irreparable damage to the 'trust' in the sport of thoroughbred racing in Kentucky.

“As important as it is to me to have a court review the stewards' disqualification of Maximum Security, this case has now become much bigger than that. It's now a case about Due Process and the fundamental fairness of how racing is conducted in Kentucky. The secret and unreviewable actions by state actors that have been authorized by the Court's Opinion are the way things are done under totalitarian regimes in third world countries.

“The Kentucky State Racing Commission should be ashamed to have created a 'rule' like this; it is no wonder most people routinely question stewards' rulings on disqualifications. I, and nearly everyone, have been operating under the belief that in America 'Due Process' was an inalienable right. But that is simply not true in Kentucky racing.

“I cannot and will not allow such a dangerous precedent to stand unchallenged. I have, therefore, authorized my attorneys to immediately appeal.”

Hours after the ruling came down on Friday, Barry Stilz, an attorney for the Wests, wrote in an email to TDN that “As regards the result, I can say that we are disappointed and believe that we have strong arguments for a successful appeal.”

In the May 4 Derby, Maximum Security led almost every step and crossed the wire first.

But there was bumping and shifting in close quarters behind Maximum Security as he led the pack off the final turn. Two jockeys filed post-race objections, but there was no posted stewards' inquiry.

The three stewards who officiated the Derby—chief state steward Barbara Borden, state steward Brooks “Butch” Becraft, and Churchill Downs steward Tyler Picklesimer—launched a post-Derby adjudication process that played out on national TV as they debated whether Maximum Security's shifting out while leading on the far turn caused crowding that affected rivals in close pursuit and almost triggered a clipping-of-heels accident.

After 22 agonizing minutes, Maximum Security was judged to have fouled Long Range Toddy (Take Charge Indy), and thus placed behind that rival in 17th place. Country House (Lookin At Lucky), who crossed the wire second, was elevated to first place via the DQ process.

The Wests' May 14 suit claimed that they were denied their allegedly rightful part of the $1,860,000 share of the Derby purse “as well as a professional accomplishment that any horseman would cherish for life, plus the very substantial value that a Kentucky Derby winner has as a stallion.”