West Hires Bramlage to Examine Maximum Security; Says He Could Abide by DQ's 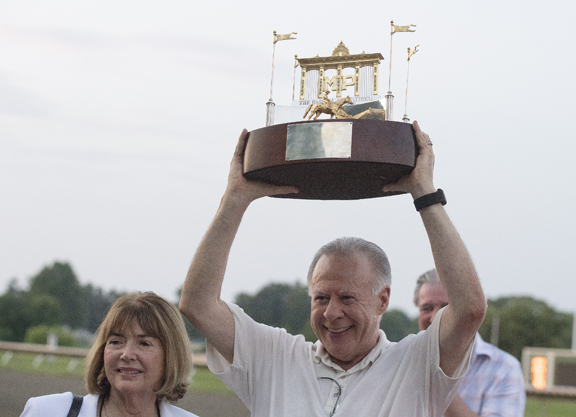 Admitting that the charges that trainer Jason Servis drugged Maximum Security (New Year's Day) threaten the integrity of Thoroughbred racing, his owner, Gary West, has announced that he has hired veterinarian Dr. Larry Bramlage to examine the horse “from hoof to tail.”

When asked by the TDN in a follow-up email that if further testing revealed that Maximum Security had illegal drugs in his systems in any races if he would advocate that the horse be disqualified, he replied: “I am not an authority on medications and SGF-1000 (the drug Servis was alleged to be using) is something I had never heard of until Monday, but if SGF-1000 is proven to be a PED and if Maximum Security is proven via testing to have been on a PED during his races, I would fully support whatever the regulators suggest doing. If that is the price that has to be paid to clean up a sport I have been in love with for 40 years, I would gladly do that for the good of racing.”

Early Sunday, West sent out a statement revealing his plan to bring in Bramlage, a highly respected veterinarian, to try to get to the bottom of exactly what has been going on behind the scenes with Maximum Security and the other horses West owned that were trained by Servis.

“I have retained Dr. Larry Bramlage to immediately perform the most advanced and comprehensive scientific and medical testing of Maximum Security known to man,” West said in a statement. “I have placed no restrictions or limitations of any kind on how, why, or what in his judgment is necessary to exhaustively examine Maximum Security from hoof to tail. He is to leave no stone unturned. Dr. Bramlage also has complete discretion to coordinate his examination with any other experts of his choosing.”

In an email to the TDN West said, “No one wants to know the truth more than I do.”

“My job is not to try to find any drugs,” Bramlage said. “I'm just looking at the horse to assess the health of the horse. Obviously, you can't expect to find anything wrong the way he ran. He just wants to know and document that no harm has been done to the horse.”

Maximum Security has been turned over to Bob Baffert. No plans regarding the remainder of his 2020 racing campaign have been announced.

Bramlage said that if any proof is to surface that Maximum Security was doped before any of his races it will likely come from a testing laboratory in France hired by Saudi racing authorities to conduct pre and post-race testing for the $20 million Saudi Cup, won by Maximum Security.

“He was tested before and after the race,” Bramlage said. “Those tests are done in France and they are much more pertinent than anything we could do now.”

According to the indictment against Servis, he was using a drug called SGF-1000 to improve the performances of virtually every horse under his care. Testing laboratories employed by U.S. racing regulators do not have a test for the drug, so it may be that the French lab cannot find it even if they believe it was in Maximum Security's system during the Saudi race.

West said that the Saudis took hair, urine and blood samples prior to Maximum Security's departure for the race and after the race. He said he had specifically asked the French lab to test for SGF-1000.

“They have already tested his samples twice in the past, but now that the substance in question is well-known (SGF-1000), I am asking them to use any additional test available to assess Maximum Security's samples,” he said.

Bramlage also said that he was puzzled as to why anyone would give a horse SGF-1000 if their intent was to improve performance.

“It's a sheep placenta collagen and I don't really have any explanation how it could affect a horse's performance,” he said.. “It's hard to make that connection with collagen.”

Collagen is the most plentiful protein found in the human body.

In his statement, West promised that the examination of Maximum Security will be as thorough as possible.

“I am announcing that Maximum Security is scheduled to have an ultrasound and ECG of his heart, a complete nuclear scintigraphy (bone scan) of his spine, head to tail, and all four limbs from the ground up this week. He will have digital radiographs of all of his joints and an ultrasound of his chest and lungs. He will also have a complete soundness exam, complete blood counts, serum enzyme and electrolyte profiles, and a complete physical exam. Additionally, Dr. Bramlage is authorized to have any other testing done that he thinks is warranted or useful.”

West said that Bramlage would also be taking hair, urine and blood samples from all the horses he had with Servis.

“This is our best contemporary option to assess the status of our horses previously in training with Jason Servis,” he said. “…SGF-1000 is the substance in question and I want to conclusively determine if there is any evidence of SGF-1000 in any of my horses' systems.”

West also said that he would be asking regulators to retest the samples taken from Maximum Security form all his graded stakes races to see if they could find SGF-1000.

West's statement began with his expressing his concern for the integrity of the sport in light of the indictments of Servis, trainer Jorge Navarro and 25 others in a massive horse doping scheme.

“After Maximum Security's victory in the Saudi Cup I was stunned to learn that my former trainer, Jason Servis, had been indicted,” he said. “He now stands accused of 'doping several horses,' one of which is my horse, Maximum Security. This is a very serious charge. It threatens the integrity of thoroughbred racing, an industry and sport that I have been a part of and have cared deeply about for decades.”