West Coast Plans Up in the Air 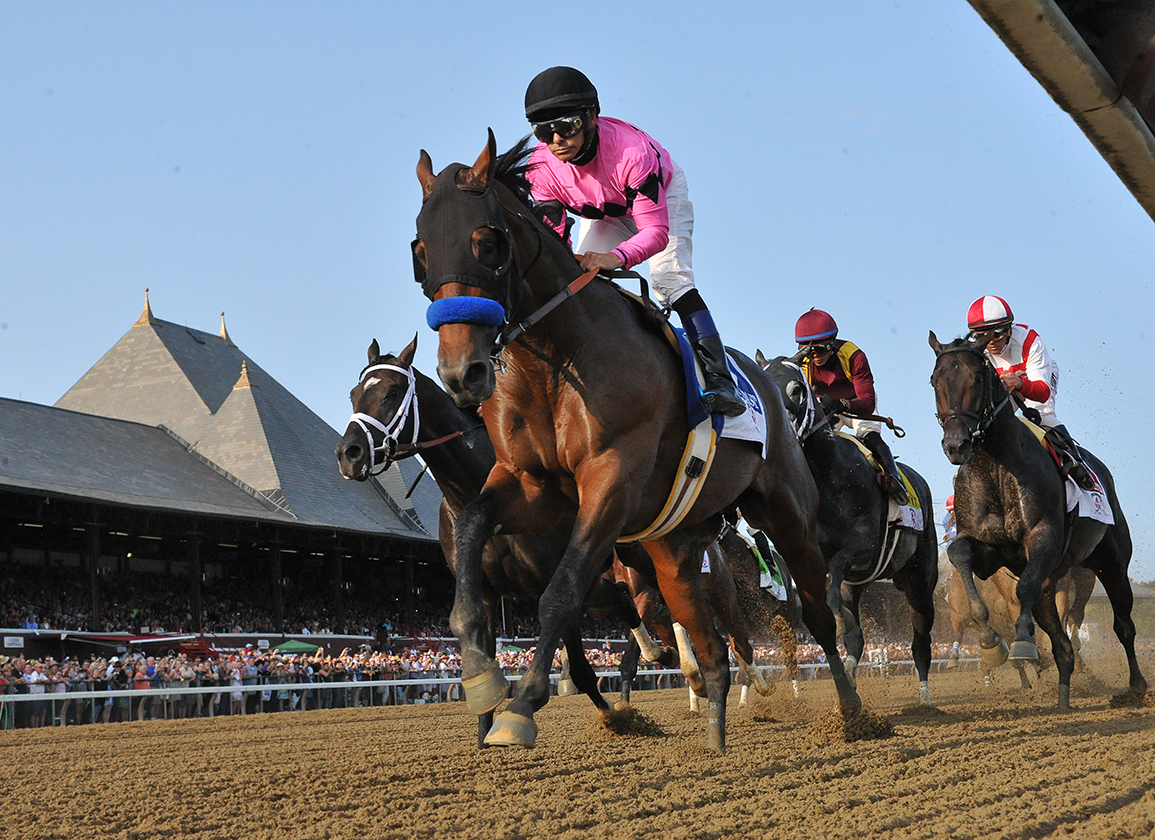 Gary and Mary West's West Coast (Flatter) is expected to ship back to trainer Bob Baffert's California barn Monday morning, but beyond that flight, plans for Saturday's GI Travers S. winner remain up in the air.

“We don't even know what his next start is, or even if he's going to be in the [GI Breeders' Cup] Classic,” Baffert said Sunday. “Right now, we just want to get him home and then we'll figure out a game plan. Right now, we're not thinking anything for him.”

“We're just trying to figure out what happened to American Anthem,” Baffert said. “He didn't run his race. It happens. Drefong is a fast horse. It all worked out great with him. It was really nice winning the Forego because it's a very prestigious and important race.”

Travers runner-up Gunnevera (Dialed In) left Saratoga Sunday evening for a van ride back to the Florida base of trainer Antonio Sano.

“I am excited and proud for my horse,” Sano said. “The result is very good for me. In his last race [Aug. 6 Tangelo S.], he won only breezing. In the Travers, I hoped to win, but being second for me against those horses…he was outside horses, he got a little bump at the five-eighths [pole], a little bump at the start, and still only got beat a few lengths.”

As for Gunnevera's next start, Sano added, “Right now the plan is to maybe go directly to the Breeders' Cup, [but] we might look to race again if the horse is very good. It was a good race and he came back good, which is very important.”

GI Kentucky Derby winner Always Dreaming (Bodemeister) will ship to WinStar Farm Monday and is in line for some rest after his ninth-place finish in the Travers.

“After he arrives, he'll get a complete physical at Rood and Riddle [Equine Hospital],” trainer Todd Pletcher said. “We'll make a determination on the next steps after that once we get the information back.”

“We'll spend the next couple of weeks processing how he comes back before we decide on which race,” Pletcher said.

Wrapping up the Travers for his two runners, Pletcher added, “We got the trip we wanted with both horses; Always Dreaming just didn't fire and I thought Tapwrit ran well. It just seemed like it was a hard track to make up a lot of ground down the stretch. When [Tapwrit] came off the turn, I thought he was in the right position and finished steadily but couldn't make up any real ground.”

“Cloud Computing is OK, [he] just didn't fire over the surface,” said Brown. “We're going to have to reevaluate. I'm hoping it's just a surface issue. There's nothing wrong with the horse right now, he looks fine. Saratoga's just not for him.”

“She came back very good,” Hollendorfer said. “[Owner] Mr. [Rick] Porter and I are going to talk over everything and will do that when Songbird is back in my barn in California. Nothing has been decided yet.”

Christina Jelm, assistant to Hollendorfer, added the 4-year-old filly had lost nothing in defeat.

“She ran a huge race and did everything she was asked to do, and she did it in Grade I company at Saratoga,” Jelm said. “The filly that won is an amazing, strong, dominant, superior, well-bred animal also and to lose by a neck to her is nothing to be ashamed of. I think Songbird has set the bar so high that the only other one to get over it so far is Beholder, so the expectation on her was to never be beat. But horses, like all great athletes, don't win every single time. Yesterday, another great filly passed her at the wire. She ran her heart out and I think she is as good, if not better, than ever. On the way back to the barn, people were cheering for her, calling her name, and telling her what a good girl she is. The important thing is that she is absolutely fine. Jerry went over her. There is nothing that is at all discernable. She's in good health and is relaxed, as she always is coming out of all her races. She's great.”