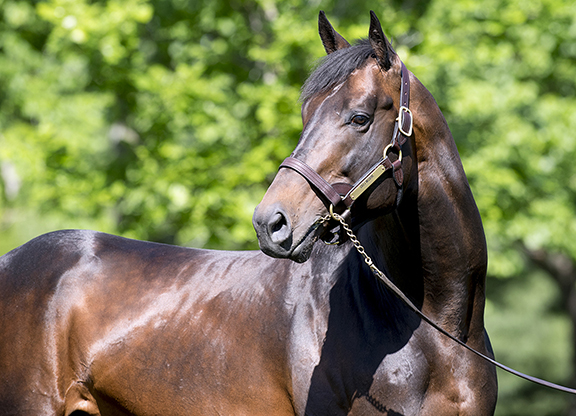 Outadore (Outwork) provided his freshman sire (by Uncle Mo) his second black-type winner in the space of eight days, working home best of all to take the Juvenile Sprint S. over a rain-affected Kentucky Downs turf course.

Beaten for speed, Outadore settled in the second flight of horses as County Final (Oxbow) dueled on the lead inside of Bodenheimer (Atta Boy Roy) through the middle furlongs. Poised three deep as the field entered the straight, Outadore was roused to the lead leaving the eighth pole and held sway at stablemate Fauci (Malibu Moon) took a failed run at him late. Cowan (Kantharos) was just up to touch County Final out of third.

“I think both will go a little farther, which is nice as well,” said trainer Wesley Ward, who saddled the first two home. “I think they'll both go a mile on the grass no problem. So we'll probably split them up in their next start, one to the [GII] Bourbon [S. at Keeneland Oct. 4], one to the [GII] Pilgrim at Belmont [Oct. 3]. We're going to talk it over with both owners and make a plan. The way it looks, Irad [Ortiz Jr.] said he was wanting more ground and was kind of waiting. First thing Tyler [Gaffalione] aboard Fauci] said was, 'Wesley, please, run him farther.' So we're really excited about both colts.”

A May foal, Outadore was making his stakes debut off a visually impressive, 2 3/4-length debut victory going 5 1/2 furlongs over the Saratoga turf course July 26.

Outadore was the most expensive of 28 of his sire's first-crop weanlings reported as sold in 2018, hammering for $140,000 at Keeneland November, and made for a nice return on investment when fetching $290,000 (3/66) at Keeneland September last year. Outwork is one of three freshman sons of Uncle Mo (Laoban, Nyquist) to be represented by black-type winners to date and joins the latter as the only first-crop stallions to have multiple stakes winners. Outwork's daughter Samborella won the Seeking the Ante S. at Saratoga Sept. 4, but was sadly euthanized after suffering an injury nearing the wire. Outadore's dam was most recently bred to Uncle Mo. Click for the Equibase.com chart or VIDEO, sponsored by Fasig-Tipton.