Wes Champagne: Farrier to the Stars 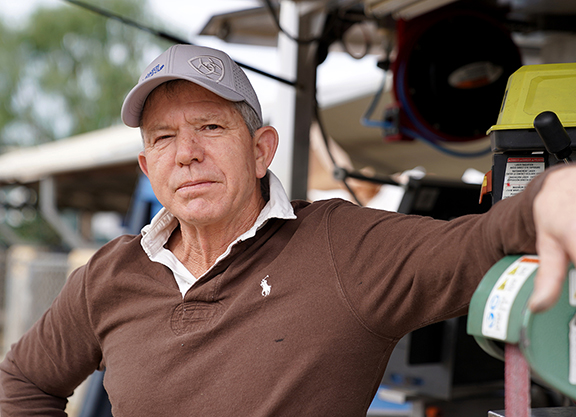 No foot, no horse–an adage that's as true now as when the world's first plough-horse was sidelined with a stone bruise. And while that same adage could be repurposed for almost any part of the horse's anatomy, it's the foot that bears the load. The hero's yoke.

Of all the farriers around the nation's backstretches toiling away on those four surprisingly delicate parts of the racehorse, few have been as highly sought-after for as long as Wes Champagne.

Four years ago, Champagne was the man responsible for American Pharoah (Pioneerof the Nile)'s Triple Crown-winning dancing shoes. Champagne repeated the dose in 2018, putting the aluminum glint to Justify (Scat Daddy)'s comet-like career. His most recent high-profile client? A little horse by the name of Accelerate (Lookin At Lucky), who didn't do too shabby for himself last year.

The following are some of the topics Champagne touched on in a wide-ranging conversation with the TDN, from the evolution of shoeing during the nearly four decades he's been doing it, to some of the more innovative shoeing techniques he's helped pioneer, and the ever-changing understanding of racehorse soundness.

“If you had to ask me what the main difference between farriers of the past and today is, I would say we've become installers of pre-manufactured shoes versus hand-made horseshoes,” Champagne said, pointing to rise of the pre-manufactured shoe, designed, like human shoes, for different-shaped, different-sized horses. Not that he's complaining.

“You can't beat the manufactured shoe. They're not off one one-hundredths of an inch. I can pull a shoe off, go right back in the same nail holes the next month if I need to. There's no way you can duplicate that.”

At the same time, these shoes have become heavier, sturdier over the years. More rigid. “They used to be much thinner, where you could just literally bend it in your hands. Now you can't budge it,” he said. This has introduced some challenges, however.

“You want that foot to be pliable,” he said, working an actual hoof like a hunk of stiff rubber to illustrate his point. “Out of the factory it's just too rigid–it locks the foot up too much.” And so, Champagne takes the hardness–the “temper”–out of the aluminum shoe in the forge. “By heating them in the fire and then cooling them really quick, you can make them soft so you can bend them in your hands.”

It's still not a perfect system. Along the widest portion of the foot, the shoe should be “relatively stable and solid,” he said, while the shoe around the heel should be more flexible. “No one's developed a shoe right now that's like that.”

Nevertheless, Champagne believes that by removing the stiffness from the modern shoe this way, he's seeing important benefits. Yes, “sprung” shoes–where a shoe snags and bends out of shape–are more common once the aluminum has had its “temper” removed. “But if I left the shoe solid, that might have been an injury instead.”

The evidence, Champagne said, supports his thinking. Since softening his shoes this way, he's noticed a “75%” reduction in suspensory injuries.

“I used to get them all the time,” he said. “Upper suspensory, lower suspensory. Now, I don't hear of it, or only very rarely. There really is something to the pliability of the shoe.”

Compared to a few decades ago, racehorse feet are getting bigger, Champagne said. “In the '80s, for instance, most horses had size five and sixes. Real small feet. Today, most everything's a size seven and a lot of eights. Feet have gotten a lot bigger.”

Whereas before, farriers largely considered small feet a necessary foundation to soundness, that thinking no longer holds sway, he said. At least in general.

On the East Coast, where “the tracks are a lot more forgiving,” farriers tend to trim the feet smaller, he said. But on the harder West Coast tracks, “if you start cutting the feet too short, they can't handle it,” he said. “The main thing is just making sure they're balanced and they that have support.”

Is there a basic formula that governs the balance of the foot? The shoe should be centered in the very middle of the foot, “and you can gauge that by the frog,” Champagne said. “The frog will never lie to you–it'll sit over the very center of the coffin bone.” This is where the heel comes into play.

As a result, “we get much less tendons than we used to get,” he added. “They're rare now. I think that's one of the things that has helped the horse more than anything.”

Likewise, conventional wisdom has been to over-trim the toe, Champagne said. By doing that, however, “you start shifting the weight to the front of the limb. The pressure just doesn't go away–you're basically moving it from one area to another. Everything has to work in harmony.”

It's a practice that raises eyebrows, especially among trainers. But in most cases where the toe looks long, it rarely is–it's that the heel is too short, Champagne said.

“The first thing a trainer will tell you when they see a horse like that, 'you've got to get the toe off.' They think you can just shape it anyway you want, like a block of wood. You can't. There's a lot of components inside the hoof and you have to take that into consideration. The hoof capsule is like a shell similar in thickness to a coconut. It's only so thick.”

Which leads to an interesting concept of Champagne's–what he coins “high speed pain,” the notion that horses only feel certain types of pain when they're extended at full race-pace.

“Dr. Allday [the world-renowned equine veterinarian] once told me, if a horse runs the first part of a race and he stops in the stretch, it's always one of three things: It's either they've lost their air, their hocks are hurting, or their feet are hurting. If their ankles, knees or anything else is hurting, they won't even run the first part of the race.”

The long-held consensus behind the short-trimmed toe is that it promotes soundness. But that concept is fundamentally flawed, said Champagne. That's because, “if a horse gets a little sore it doesn't want to run that fast again. It starts to protect itself,” he said.

Champagne is the pioneer of glue-on shoes, now a staple of the backstretch. “Yeah, I started the whole thing,” he said. An early high-profile poster child of his was Fusaichi Pegasus–the first horse to win the Kentucky Derby with glue-on shoes.

The idea sprung in the early 1990s from a horse of trainer Vladimir Cerin's, who had lost “half her foot.” And so, unable to nail the shoe on using traditional methods, the light-bulb pinged when he saw “someone playing around with a glue” which, at the time, was used in robotics and the auto and aircraft industries.

“I put a few nails in the foot and then filled that all in with glue, and when I came back the next month to try to get it off, I couldn't. So, I literally went down and bought a hacksaw and I cut between [the hoof and the shoe] to get it off, and right there I knew I had it because I didn't even need nails.” he said. “I started playing with it and then figured out part of the holding power was is in the heels.”

There were any number of bugs to work out–how glue, for example, hated iodine, which was used more prevalently back then to harden the sole and toughen and disinfect the frog. However, “after the glue-on shoes everything took off. People started trying to be innovative with plastics, rubber shoes, glue-on plastic shoes. It just started a whole craze.”

The way Champagne uses glue-on shoes hasn't changed much over the years, though new plastics have since been developed with which “we can virtually build a whole new foot.” Nevertheless, he's in two minds as to their long-term impact on the sport, and the breed itself.

On the one hand, horses that “would never made it make it” are subsequently funneled into breeding shed, “so it's kind of backfiring on us in that respect.” And yet, when he fixes an unsound horse, “there's a real satisfaction there. I think it's helped a lot of pain and suffering–horses that were being pinched on a daily basis due to thin hoof walls.”

Another of Champagne's innovations is the Blacksmith Buddy, an anatomically correct prosthetic leg with a detachable and recyclable hoof, for use by trainee farriers. As explained on his website, “while live horses can only be worked on once every six to eight weeks, the Blacksmith Buddy can be put to use anytime, anywhere.”

The contraption–remarkably lifelike, aesthetically too–took about a year-and-a-half to develop, and required the input from a variety of experts. An engineer who works at Harvard. A BMW body design expert. A prosthetist who works with the Navy. Special effects experts from the movie industry. “It was a lot of work.”

Almost every veterinary hospital in the world, except Cornell, uses the limb, Champagne added. “I have them in China. I have them in Australia. I have one in St. Kitts Islands.” They've been especially well-received, he said, at blacksmith schools–just ask the director of the Pacific Coast Horseshoeing School (the current iteration of Champagne's Alma Mater).