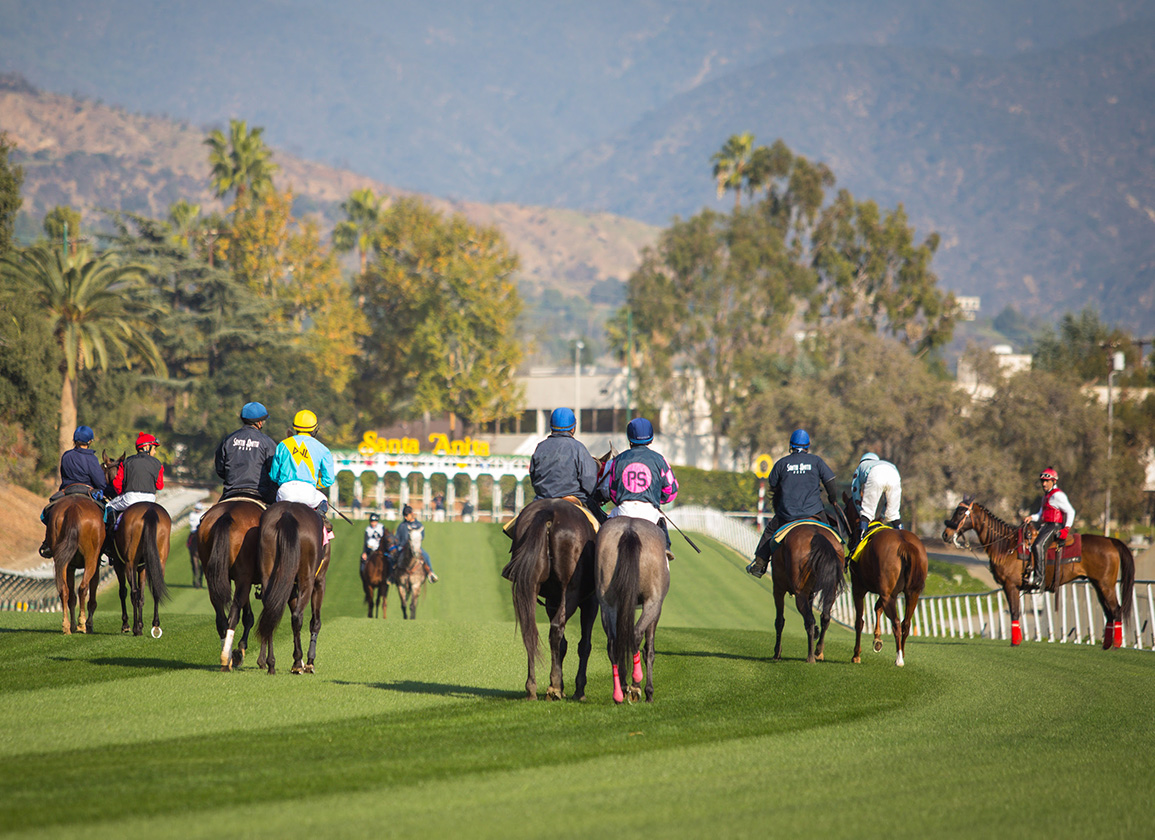 Following through on a discussion started at last month's meeting, California Horse Racing Board (CHRB) advanced Thursday a rule amendment designed to provide jockeys with weight breaks that are more in line with 21st Century human physiology.

By unanimous vote, the CHRB proposed Thoroughbred rule changes that would raise the minimum weight for established riders from 112 pounds to 114 pounds in overnight races (subject to apprentice allowances) and from 103 to 105 pounds in handicap and stakes races.

The board also advanced a separate amendment that would reduce the amount of overweight a Thoroughbred jockey can carry from seven pounds to five.

According to a staff analysis published in the CHRB's meeting packet, the overweight reduction change “is being done in conjunction with raising the weight minimums for jockeys by two pounds based on discussions with the Jockeys' Guild and racing secretaries.

“Both of these groups agreed that two pounds will help riders' health but not force the racing secretaries to change their average assigned weight too much. Therefore, if we are raising the minimum jockey weight two pounds, we need to drop the maximum allowable overweight two pounds so that we are not adding weight to horses which could introduce animal welfare concerns.”

For Quarter Horse races, “the minimum weight to be carried shall be 120 pounds, regardless of any otherwise permitted allowance,” according to the version of the amendment provided in the meeting packet.

A different rule change also discussed a month ago by the CHRB that would start apprentice allowances at seven pounds (instead of the current 10) is also in the pipeline.

Scott Chaney, the CHRB's executive director, said making amendments to that existing rule are “a lot more extensive” and will be brought before the board at a later date.

There was only minimal commissioner discussion and no members of the public commented on the weight issues. A final vote will take place at a future meeting after another opportunity for commenting.

In light of management-imposed attendance limitations for the first day of the season July 22, Del Mar Thoroughbred Club (DMTC) president Josh Rubinstein told the CHRB that, “We expect opening day to sell out later this week.”

Rubinstein said that Del Mar will be “significantly reducing general admission ticketing” for opening day only without mentioning a specific attendance cap number.

“Based on the feedback we received in 2021, especially when we hosted the Breeders' Cup, [we have] limited capacity for opening day this summer, which is traditionally our biggest day,” Rubinstein said. “We will continue to sell every box, every table, every seat. But we want to ensure [that] our core customers, the people that are with us week in and week out, have a quality experience. So we are capping opening day.”

Cal Expo back in action

The Thoroughbred meet at Cal Expo (aka Sacramento), which got cancelled the past two years along with the annual summer state fair there, will be back in action July 15-31, with racing on a Friday-through-Sunday basis.

In 2020 and '21, the fairgrounds property got turned into a COVID-19 testing and vaccination facility. Although night harness racing eventually restarted, with the most recent meet concluding in May, the Thoroughbred meets got moved to Pleasanton.

Larry Swartzlander, the executive director of the California Authority of Racing Fairs and the director of racing at Cal Expo, said the track is in “excellent shape,” with 300 horses already stabled on the grounds.

“It's been two years to finally get back to racing over there,” Swartzlander said. “The [California] Governor's Cup will be back–a $75,000 guaranteed race. The overnight purses are being raised approximately $200,000. We don't call it Ship & Win like Del Mar, but we've always had an out-of-state incentive to owners and trainers.”

The state fair operators used the downtime from not hosting a summer fair or Thoroughbred racing over the past two years to make some $18 million in improvements.

Although many of the infrastructural upgrades will not be noticeable (like miles of new underground gas lines, the drilling of a new well, new roofing on buildings), they are the types of long-term facility investments that will enable Cal Expo to conduct future race meets.
Horse people are, however, likely to notice a new restaurant that got built near the stabling area.