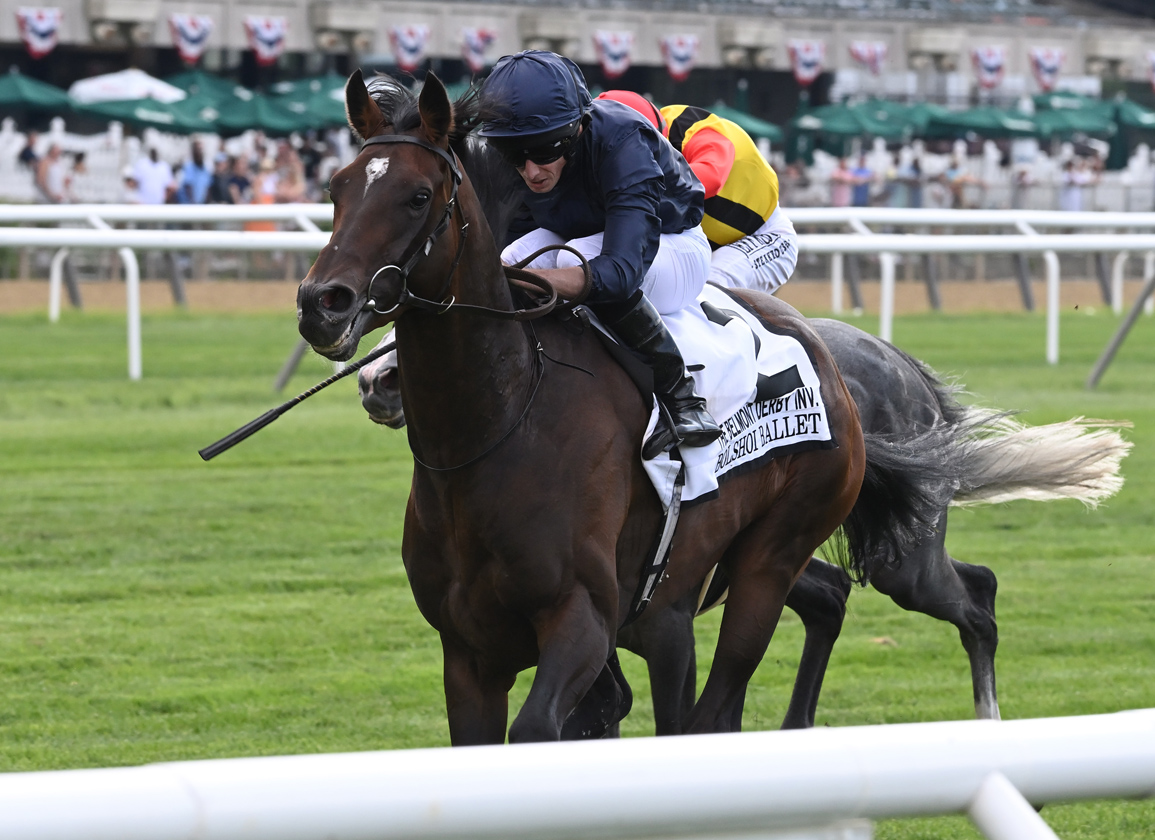 One horse overshadowed all other news items of the past week as the bloodstock world came to terms with the death of Galileo (Ire) at the age of 23.

Fulsome tributes have been paid to him from across the globe with the overwhelming feeling being that we will never see his like again. It is worth bearing in mind, however, that many of us felt the same when his own extraordinary sire Sadler's Wells died 10 years ago. That colossus of the breeding world appeared in the third or fourth generation of four group winners at Newmarket's July meeting–Starman (GB), Snow Lantern (GB), Sir Ron Priestley (GB) and Sandrine (GB). That's just a snapshot of course, but it is indicative of how Sadler's Wells still shapes the modern-day Thoroughbred even a decade after his death, and often through that most effective of conduits, Galileo. The same will be true of Galileo in the decades to come.

As the suffixes of the above-named horses show, British breeders enjoyed a good week in Newmarket, with both Group 1 races falling to relatively small operations. David Ward's pride and joy Starman, a son of Dutch Art (GB), gave his breeder deserved compensation for having to miss Royal Ascot with both his intended Group 1 starters when the weather turned foul.

When interviewed by TDN in May, Ward outlined his hopes for a future stud career for the Ed Walker-trained Starman, whose sole defeat in six starts came in very soft ground on Champions Day last year. Swerving that soft ground again at the Royal Meeting was understandable, and Starman now has the Darley July Cup on his CV along with the G2 Duke Of York S.

Snow Lantern, who became the fifth Group 1 winner this year for Frankel (GB) when winning the Falmouth S., compensated for the narrow defeat in the same race as her Classic-winning mother Sky Lantern (Ire) (Red Clubs {Ire}) and become the first top-level winner for Ben and Martha Keswick's Rockliffe Stud. The Gloucestershire farm is home to their nine broodmares and Snow Lantern will presumably eventually return there herself, through encouragingly the Keswicks have expressed a wish for the loose-moving grey to race on at four.

The two Group 1 winners at the July meeting are also a feather in the cap of Ed Sackville, who is the bloodstock advisor for both Rockliffe Stud and David Ward, who keeps his mares at Whatton Manor Stud.

The smartest of the juvenile fillies at this stage of the season is certainly Kirsten Rausing's homebred Sandrine (GB), who represents the fourth generation of Lanwades' Sushila (Ire) family. Just as the unbeaten Sandrine–who added the G2 Duchess of Cambridge S to her victory in the Group 3 win at Royal Ascot–is helping to raise the profile of her young sire Bobby's Kitten, so did Sushila's son Petoski (GB) for his sire Niniski.

The King George VI and Queen Elizabeth S. winner of 1985, Petoski was a member of the first crop of Niniski, the first stallion stood by Rausing after her purchase of Lanwades Stud in 1980. Petoski's victory in the G2 Vintage S., along with the success of that season's champion 2-year-old Kala Dancer (GB), helped Niniski–winner of the Irish St Leger and Prix Royal-Oak–on his way to becoming the champion first-season sire of 1984. He was later succeeded at Lanwades by his Classic-winning son Hernando (Fr).

It would be fair to say that Rausing wears her heart on her sleeve when it comes to her own stallions and, in a terrific season for runners bearing her famous white-and-green-hooped colours, it is a good bet that none has given her more satisfaction than Sandrine, who at this early stage is the ante-post favourite for the 1000 Guineas.

Her victory continued a real purple patch for Rausing, who the previous weekend had celebrated the success of Alpinista (GB) (Frankel {GB}) in the G2 Lancashire Oaks. Rausing's most recent Group 1 victory came with Madame Chiang (GB) (Archipenko) in the British Champions Fillies & Mares S., and it would be no surprise to see Sandrine or Alpinista add to that tally before long.

Andrew Balding, who is also enjoying a fine season, indicated that he would like to give Sandrine a brief spell before tackling the G1 Cheveley Park S., a race the trainer won last year with Jeff Smith's Alcohol Free (Ire) (No Nay Never).

The latter, who has gone on to win the G1 Coronation S. this season, had to settle for third in the Falmouth behind Snow Lantern, but Smith's colours were spotted in the winner's enclosure on the July Course aboard Frankella (GB), the second foal of his talented but tiny G1 Juddmonte International winner Arabian Queen (Ire) (Dubawi {Ire}).

The maiden win for the juvenile filly was another example of Frankel working well with a Dubawi mare. The same cross has been season this season in Derby winner Adayar (Ire) and listed winner Mostahdaf (Ire), as well as Frankella's full-brother Spirit Mixer (GB). The 2019 G1 Jebel Hatta winner Dream Castle is also by Frankel and out of Dubawi's Group 2-winning daughter Sand Vixen (GB).

The draft of Shadwell fillies, mares and horses in training accounted for almost a sixth of the turnover at a very strong edition of the Tattersalls July Sale last week, and runners bred by the late Sheikh Hamdan also fared well on the track.

Vying for leading honours were the full-brothers Hukum (Ire) and Baaeed (GB), sons of Sea The Stars (Ire) and the listed winner Aghareed (Kingmambo) trained respectively by Owen Burrows and William Haggas.

Hukum, now four, was a star for Burrows last season, winning the King George V S. at Royal Ascot before landing the G3 Geoffrey Freer S. and finishing fifth in the St Leger. He has continued in similar vein this year with a listed win at Goodwood in May and now his second group win in York's John Smith's Silver Cup.

This came two days after his year-younger sibling Baaeed remained unbeaten when posting one of the most visually impressive wins of the meeting at Newmarket in the listed Sir Henry Cecil S. Baaeed looks capable of contesting bigger and better targets, and though his three wins have all come at a mile, he should be effective over further. His dam won the listed Prix de Liancourt over 10 furlongs for John Hammond, and she is out of the GI Breeders' Cup Filly & Mare Turf winner Lahudood (GB) (Singspiel {Ire}), herself a great grand-daughter of Height Of Fashion.

Another mare in line for top broodmare honours this year is Susan Hearn's Reckoning (Ire) (Danehill Dancer {Ire}), though there were mixed fortunes for her two star offspring last week.

On the day that Sir Ron Priestley (GB) (Australia {GB}) posted his third stakes win of the season after returning from a 571-day absence, it was revealed that his half-brother, the impressive Ascot Gold Cup winner Subjectivist (GB) (Teofilo {Ire}), has suffered a leg injury and has been ruled out of running again this season, if not for good.

That regrettable news, particularly for Subjectivist's owner Dr Jim Walker, was partially softened by the latest hard-earned success of Paul Dean's Sir Ron Priestley, who ground out his second Group 2 win in the Princess of Wales's S. in utterly determined fashion over the strongly backed Al Aasy (Ire) (Sea The Stars {Ire}). We may see him next in the King George unless he is supplemented to take his brother's place in the Goodwood Cup.

Aidan O'Brien would certainly have preferred to see Bolshoi Ballet (Ire) (Galileo {Ire}) and Santa Barbara (Ire) (Camelot {GB}) notch a double at Epsom, but instead their Derby and Oaks wins came in the New York version, with Ryan Moore in the saddle for both Grade 1 victories at Belmont Park. Santa Barbara's win is particularly noteworthy as she becomes the third consecutive Group/Grade 1 winner for her dam Senta's Dream (GB) (Danehill) after Iridessa (Ire) (Ruler Of The World {Ire}) and Order Of Australia (Ire) (Australia {GB}).

The overseas runners from Ireland were rampant at the weekend with Ken Condon taking another Group 1 at Deauville in the Prix Jean Prat with Laws Of Indices (Ire) (Power {GB}), who finished just a head in front of the Joseph O'Brien-trained Thunder Moon (Ire) (Zoffany {Ire}). The latter, like Santa Barbara, was bred by Aidan and Annemarie O'Brien's Whisperview Trading.

They were backed up by the victory of the Jessica Harrington runner Loch Lein (Ire) (Invincible Spirit {Ire}), a homebred for Denis and Joan Brosnan of Crooom House Stud, in the listed Prix Amandine.

Laws Of Indices may well go down as the bargain buy of the year, though he has a rival in that department in Helvic Dream (Ire), who less than two months ago became the first Group 1 winner for their sire Power when defeating Broome (Ire) (Australia {GB}) in the Tattersalls Gold Cup. Helvic Dream was a €12,000 Tattersalls Ireland September yearling bought by Peter Nolan, while Laws Of Indices was bought for €8,000 by Dermot Farrington at the Goffs Autumn Yearling Sale.

Laws Of Indices had already proved himself a talented individual last season when beating Lucky Vega (Ire) (Lope De Vega {Ire}) to win the G2 Railway S. He is a fine advertisement for the ability of his trainer who also sent out last year's G2 Lowther S. winner Miss Amulet (Ire) (Sir Prancealot {Ire}). The filly was another value buy as a £7,500 Ascot yearling after selling for just €1,000 as a foal.

It was also a good week for Power's sire Oasis Dream (GB), who was represented by the winner of the G2 Superlative S., Native Trail (GB). The colt had been a decent pinhook by Norman Williamson, who bought him for 67,000gns through Mags O'Toole at Book 1 and resold him at Tattersalls in April at the Craven Breeze-up sale for 210,000gns to Godolphin. Native Trail, who is unbeaten in two starts, became the fourth winner of the Superlative S. For Charlie Appleby in the last six years following Boynton (GB), Quorto (Ire) and Master Of The Seas (Ire).