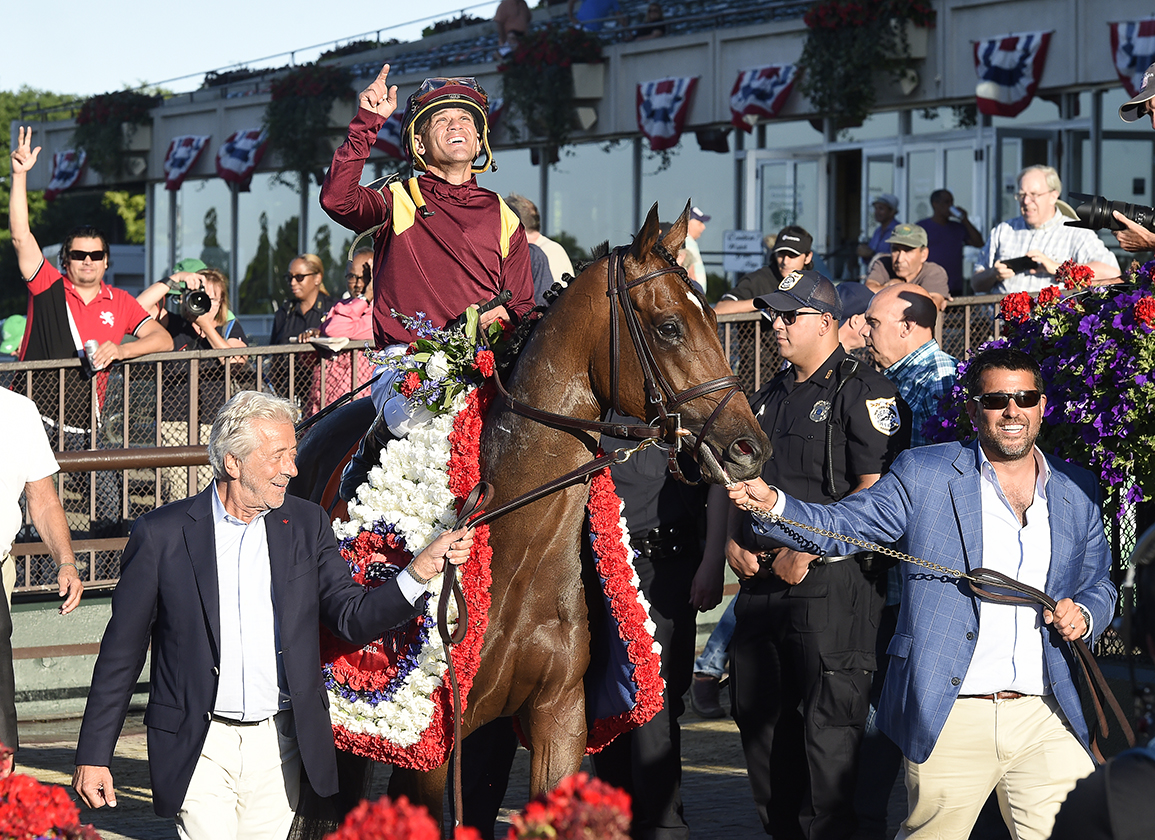 Saturday's slate of graded stakes at Saratoga Race Course yielded entertaining and intriguing races whose results very likely include pertinent clues that could go a long way toward solving the non-2-year-old divisions of the Breeders' Cup.

Hopefully you got your fill out of the GI Runhappy Travers S. and its undercard though, because in this era of longer-spaced and lightly raced game plans, the notion of an “autumn campaign” for elite-level horses is slipping by the wayside.

We're now inside the 10-week mark for Thoroughbred racing's world championships, and it will be surprising if any of the major contenders start more than once prior to taking aim at Churchill Downs on Nov. 2-3. Not unexpectedly, the connections of several divisional heavy hitters have already indicated a preference for training straight up to the Breeders' Cup.

So if we're sifting for nuggets that have some prognostic value, you have to start at the top with Catholic Boy (More Than Ready)'s authoritative shakedown of the solid (but not stellar) Travers field.

Beyond the oomph of his four-length, pace-pressing win that left the impression there's more left in the tank, the year-long arc of his adept progression into a forwardly placed pace presence who can win Grade I races both on turf and dirt is likely to be the truer indication that the ridgling will again outrun his odds if he shows up in the GI Breeders' Cup Classic.

With the exception of the GI Florida Derby–a race in which he bled and got derailed from the Triple Crown trail–Catholic Boy has never been beaten more than two lengths at the wire. Six of his nine races are wins, yet he never gets proper respect at the wagering windows, having started favored just once. His 7-1 odds in the Travers were more or less in line with his usual overlaid starting prices.

Remember, too, that trainer Jonathan Thomas spent a good deal of time this past spring trying to get Catholic Boy accustomed to rating from farther back.

“I'd like to get him buried and just take him off the pace a bit more and let him come with a big, extended run,” he told TDN back in February.

But since Catholic Boy returned to the races on the grass in June, he's been allowed to either seek the lead or force the fractions on the front end, and letting the horse do it his way has paid off handsomely.

Catholic Boy appeared entirely in his element hounding Mendelssohn (Scat Daddy) through legit splits in the Travers, and when fully unleashed approaching the quarter pole, he spun into the home straight with a full head of steam. After some momentary shifting inward three-sixteenths out, Catholic Boy straightened out and dug in gamely, and his widening of the margin late in the lane was accomplished with a noticeable sheen of confidence that suggests he has become well aware of where he belongs near the top of the pecking order.

Catholic Boy might take an unconventional next-race prep path to the Classic. Thomas said Sunday that the GII Hill Prince S. at 1 1/8 miles on the turf Oct. 6 at Belmont Park was the most likely option. But it is not the only one: He added that the GI Jockey Club Gold Cup a week earlier was also a possibility, and so is letting Catholic Boy simply train up to the race in Kentucky.

The rough-housing rivalry between Abel Tasman (Quality Road) and Elate (Medaglia d'Oro) could be over just as the plot is beginning to thicken.

The one-two favored finishers from Saturday's GI Personal Ensign S. again required a stewards' long look prior to the “official” sign being lit on the tote board.

Recall that in last year's GI Coaching Club American Oaks on opening weekend at the Spa, an outside-running Abel Tasman beat a rail-hugging Elate by a head after a stretch-long, muscle-to-muscle, close-quarters joy ride in which no disqualification was issued despite a prolonged inquiry by the judges.

This year, the roles were positionally reversed, but the outcome (this time by a nose) was essentially the same: Abel Tasman, at the fence through the stretch run, edged out under left-handed whipping while a hard-charging Elate came in slightly in deep stretch, and it was Elate whose momentum was knocked out of whack for a stride or two as the two brushed in close quarters.

Upon crossing the wire, Elate's rider, Jose Ortiz, immediately pointed in the direction of the stewards' stand, seemingly to indicate he believed a foul had been committed. He then lodged a formal objection against Mike Smith and Abel Tasman, which was not sustained amid a rare (for Saratoga patrons) chorus of booing while the winner had her photo snapped in the Spa winner's circle

Abel Tasman is an aggressive sort. She moves early in her races–sometimes commencing a field-looping bid six furlongs out–and seems to thrive on close contact through the stretch. Elate excels in races when she can uncoil and build up significant, clear momentum without the added task of having to defend her late-race position, and the longer the better for her in terms of distance.

Trainer Bob Baffert indicated on Sunday that Abel Tasman might train up to the nine-furlong GI Breeders' Cup Distaff. Bill Mott, Elate's trainer, told DRF.com that he might consider entering the Classic with Elate, in part because she's 2-for-2 at 1 1/4 miles.

In other Spa undercard stakes, it's worth noting that among the trio of Grade I sprints run at seven furlongs on Saturday (the Jerkens, Forego, and Ballerina S.), the fastest final time was posted in the filly and mare stakes by Marley's Freedom (Blame).

Granted, it's splitting hairs when you come down to hundredths of a second. But her final time of 1:21.39 still edged out the Jerkens S. win by Promises Fulfilled (Shackleford) by .05 seconds and the Forego S. victory by Whitmore (Pleasantly Perfect) by .07 seconds.

And in grass stakes action, forward placement was at a premium. Both the 12-furlong GI Sword Dancer S. over the inner turf course and the 1 1/16-mile Ballston Spa S. over the outer course yielded finishes that resulted from the 1-2 pacemakers maintaining their positions without change all the way around the course.

On the opposite coast, the GII Pat O'Brien S. at Del Mar Thoroughbred Club was low on quantity of entrants (four starters), but high in potential superstar potential.

The throttling that speed-to-spare Catalina Cruiser (Union Rags) administered to his overwhelmed rivals over seven furlongs could have eclipsed his 7 1/4-length winning margin if jockey Drayden Van Dyke had needed to ask him for serious run at any point in the race.

The 4-for-4 John Sadler trainee will be pointed for the GI Breeders' Cup Dirt Mile after snagging the “Win and You're In” qualifier on Saturday. The more tantalizing storyline would have the 4-year-old colt aiming for the Classic, but Sadler also conditions GI Pacific Classic victor Accelerate (Lookin At Lucky), who is the West Coast's top older male distance horse, and he's already secured his own qualifying berth into the Breeders' Cup Classic.

Even though Catalina Cruiser is another top contender who might train up to his Breeders' Cup race, stretching out in distance is certainly something that is on Sadler's long-range radar.

Catalina Cruiser “will hopefully by January be ready for the [GI] Pegasus [World Cup],” Sadler said on Sunday. “He'll be a little more seasoned, mature and all that stuff by then.”