Home » Archive » Shared News » Week in Review: The Sport Will Miss Suffolk Downs More Than it Might Think

Week in Review: The Sport Will Miss Suffolk Downs More Than it Might Think 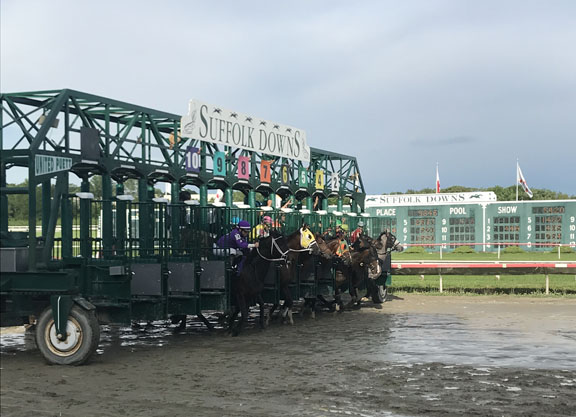 What if there were not a baseball team in Boston or had never been one? As preposterous as that may seem, just consider the what-ifs. How many people in, not only one of the most important cities in the country, but a huge region of the nation, would have wound up being baseball fans? The answer is a lot less than there is now.

Baseball will never go away in Boston or New England, but horse racing has. There used to be racing in five New England states with as many as 13 tracks. After opening 84 years earlier to a crowd of 35,000, Suffolk Downs ran its last-ever race Sunday. They lost out on a bid to get a casino license, sold the property to a developer and the ancient old grandstand will be knocked down any day now.

Even in a city as large as Boston and in a region as vast as New England, there was no formula that worked when it came to live racing. The on-track product was unappealing and the horseplayers of Boston eschewed Suffolk’s races for simulcasts from New York, California, Kentucky and elsewhere. Suffolk is part of a gritty, blue-collar neighborhood that borders Boston and the town of Revere. Where Santa Anita has majestic mountains, Suffolk’s main entrance is surrounded by huge oil storage tanks. This is not a pretty place. But any land is valuable in a city as large and as dense as Boston and the owners could make a lot more money selling the property than keeping it as a racetrack.

That a C-level track that had been clinging to life for the last four or five years is now no longer may not seem like such a big deal to those about to gather for the Saratoga or Del Mar meets or are already thumbing through the catalogue for the Fasig-Tipton Saratoga sale ready to spend lavishly on what they hope is the 2021 GI Kentucky Derby winner.

The sport still revolves around the bettor, whose wagering dollars fuel everything. The sport needs fans because fans become bettors. It’s not the other way around. I have yet to meet anyone who fell in love with racing because he or she was introduced to an ADW and was thrilled beyond belief by the spectacle of watching three-inch horses dashing across through their computer screens.

Outside of people who grew up in racing families, virtually every fan and bettor I know got hooked on racing by attending live racing. A normal day at the track may not be what it used to be, but nothing beats it. There is something intoxicating about stepping up to the window, playing your horse, hearing the cheer of the crowd, watching your pick cross the wire first and then heading to the cashier’s window.

That’s how you create a racing fan and it is racing fans who become bettors.

So where do new racing fans come from? It won’t be from Portland, where Portland Meadows just closed down. And it won’t be from New England anymore. This is a problem.

Had Suffolk closed for good in the early ’80s, I would not be nearly the racing fan I am today and likely would have gone into another profession. I spent my college year at Tufts University, about a 20-minute drive from Suffolk, and the many days I spent there is what created my personal love affair with the sport.

Suffolk is one of those places where the cliche “beauty is in the eye of the beholder” can’t be avoided. Even during its better days, the facility was run down and the racing was bad. The hearty New England crowd didn’t flinch when it was 23 degrees out and snowing on a Wednesday afternoon in February. The show would go on and the stands would be filled. But I loved the place, so much so that I made sure to schedule as many classes as possible on Tuesdays and Thursdays, the two days the place was dark. That explains why an economics student took a class in Portugese literature.

I came to say goodbye Sunday to an old friend. Closing day was not at all what I had expected. There were a lot of people here, probably more than at any other racetrack in America. The lines at the betting windows were long, long to the point of inconvenience. But people seemed neither excited nor sad.  The place had actually died a long time ago, when Suffolk failed to land a casino license when gaming was approved in Massachusetts. This was not a funeral or even a time to look back. That ship had already sailed. It was a fairly normal day at the track, only that it included a lot of curiosity seekers who wanted to say they were there the last time a horse ever crossed the finish line.

Everyone seemed ready to move on. The place that actually received the casino license, Encore, had just opened and is always jammed. The Red Sox are having a miserable season. The Red Line, part of the “T” subway system, is a mess. The trainers and jockeys who helped filled out the final card departed soon after the last race for the tracks where they regularly compete.

The last race ended…and they turned off the lights.

It was a bad day for horse racing.

Remaining Questions for the Breeders’ Cup

Though the key question–whether or not the Breeders’ Cup will be run at Santa Anita this year–has been answered, there are still some questions that have yet to be resolved.

Two that come to mind:

–Will Jerry Hollendorfer, who is banned from racing at Santa Anita, be allowed to compete? Breeders’ Cup Chairman Fred Hertrich told the TDN that it would be premature to answer that question because he has no idea if the Hollendorfer ban will still be in place when Santa Anita re-opens in he fall.

–Will the GI Breeders’ Cup Turf Sprint be run at five furlongs or 6 1/2 furlongs? The two distances make for very different races. Previous Breeders’ Cup Turf Sprints run at Santa Anita have always been run at 6 1/2 furlongs, but Santa Anita did not hold any more of those “down-the-hill races” after a horse named Arms Runner suffered a fatal injury in the GIII San Simeon S., a 6 1/2-furlong grass event Mar. 31.

New York Gets It Right

NYRA and the New York Thoroughbred Horsemen’s Association announced a joint effort Saturday to increase funding for aftercare for horses who retire after racing at the New York tracks. Starting with opening day at Saratoga, July 11, anyone claiming a horse will have to pay 1.5% of the claiming price, with the additional money going into a fund that will be allocated to the Thoroughbred Aftercare Alliance and the Take the Lead Thoroughbred Retirement Program. In addition, the amount of money an existing owner will have to contribute to aftercare whenever starting a horse will be increased from $5 to $10 a start. It is estimated that these new programs will raise an additional $450,000.

What to do with racing’s retirees is as old as the game itself, but it is a problem that can be solved. The answer is simple: it’s all about money. The sport needs to raise enough money so that every last horse that comes off the track is guaranteed a good home. Many tracks already have programs where owners are required to make a small contribution each time they start a horse, and none is better than the program in place at Parx. Good for NYRA and its horsemen for doing more to help with this problem. Hopefully they, and tracks, like Parx, are setting an example that every track will eventually follow.