Week in Review: The Beauty of Songbird 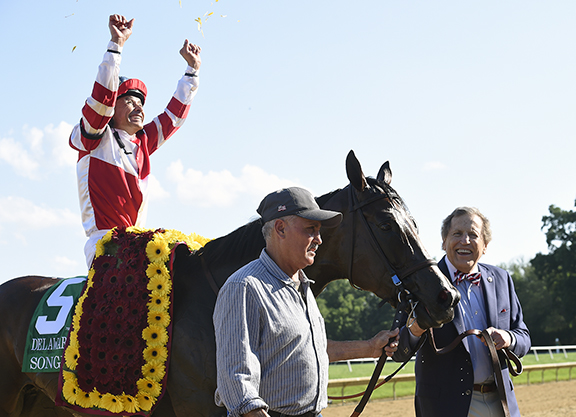 The news that another top race horse has been retired seems to come in a never-ending cycle and is never a surprise. That the Thoroughbred is fragile is something everybody knows and a problem for which there seems to be no answer. We miss them all. Some, though, more than others.

In a sport where it's easy to grow cynical and skeptical, Songbird (Medaglia d'Oro) was one of those horses who reminded us why, deep down, we all like this game so much. She was very talented, but that was not the only reason she was such a likeable horse and will be missed so much now that it has been announced that her career is over. Songbird was a great horse, owned by an old-school sportsman, trained by a gifted Hall of Famer and ridden by a jockey who excels on the biggest stages and just happens to be one hell of a nice guy. With her talent and her classy connections that consisted of Rick Porter, Jerry Hollendorfer and Mike Smith, Songbird was the type of horse nobody could dislike.

Until this year, when she began showing signs that she wasn't quite herself, Songbird performed on the racetrack in that effortless manner that takes your breath away. She would beat up on Grade I competition and do so so easily that it looked like she was just playing around out there on the racetrack. They finally beat her in last year's GI Breeders' Cup Distaff, but it was only by a nose and her conqueror was another mare-for-the ages, Beholder (Henny Hughes). Even in defeat, Songbird gave us great theater as the Distaff was as memorable a Breeders' Cup race as there was, and that could not have been the case if Songbird wasn't there to give Beholder the fight of her life.

Porter, battling cancer at the time, let it be known after the Breeders' Cup that, not only would Songbird return for a 4-year-old campaign, but that he intended to race her well into the future, two, three years, maybe even more. He was more interested in the enjoyment he got from racing her than he was in cashing in on her value as a broodmare. We thought we were going to get to enjoy Songbird for a long, long time, thanks to an owner who gets it.

Songbird began this year with a win in the GI Ogden Phipps at Belmont and then showed up at Porter's home track, Delaware Park. It was there, in the GI Delaware H., that it first seemed that something might be amiss. She won, but she had to work hard to beat the type of opponents she would have wiped the floor with when at her best. Her last career start came in the GI Personal Ensign at Saratoga. This time she lost, and by just a neck. It was hardly a disgrace, but, again, it was obvious she was not the same horse. A veterinary examination showed why. An ultrasound revealed that her hind suspensories were enlarged.

So, her career came to an end with 13 wins from 15 starts, 12 stakes victories, nine Grade I wins, $4,692,000 in earnings and two Eclipse Awards. They might as well get going on her Hall of Fame plaque right now.

“All good things must come to end,” Porter posted on Facebook when announcing Songbird's retirement. That is, of course, true. But in this case, that doesn't make the news any easier to swallow.

Gun Runner Was Superb, But What Else Did You Expect?

There's not a whole lot more to be said about Gun Runner (Candy Ride {Arg}) at this point, but that doesn't mean that his latest romp, doesn't deserve special mention. What we have right now is an outstanding horse at the very top of his game, and that's going to be a dangerous combination come Breeders' Cup Day, whether the real Arrogate (Unbridled's Song) shows up or not.

The highlight of the last Saturday card in 2017 at Saratoga was, of course, Gun Runner's electric performance in the GI Woodward S. In what might have been the best race of his career, he won by 10 1/4 lengths and rated comfortably off the lead when Jose Ortiz decided to go for it out of the gate on Neolithic (Harlan's Holiday). Neolithic, who was third, and Rally Cry (Uncle Mo), the runner-up, are good horses–and Gun Runner destroyed them.

That's three straight Grade I wins for Gun Runner and he's won them by a combined margin of 22 1/2 lengths. Should everyone stay healthy, Horse of the Year will be decided in the GI Breeders' Cup Classic when Gun Runner and Arrogate square off for the first time since the G1 Dubai World Cup. No one knows for sure what to expect from Arrogate at this point, but we all know what he's capable of accomplishing when at his very best. Let's hope he shows up. The good Arrogate vs. Gun Runner should be some show.

Sorry, but the NYRA stewards did the wrong thing when they banned May B (Werblin) from racing in the Woodward. Owner Ron Paolucci told the stewards that he was entering the horse in order to be a “rabbit” for War Story (Northern Afleet). He was told the horse would not be allowed to run.

“We feel all horses that enter should be able to win the race,” steward Stephen Lewandowski told the Daily Racing Form.

Under New York racing rules the stewards do have broad powers to deny entries, but by banning May B they stepped over a line they should not have. If Lewandowski feels that all horses that enter should be able to win a race then they need to ban all rabbits. Some are better than others and May B would have had zero chance to win the Woodward, but the role of all rabbits is not to win a race, but to make things easier for their stablemates. Rabbits are part of the game and have been since the beginning of time. A handful of prominent stables, among them Ken Ramsey's and Juddmonte Farms, like to use them, and for stewards to decide that some are OK while others are not is unacceptable because it is far too arbitrary.

May B likely would have had no impact on the race. He would have gone to the front while the good horses just stayed out of his way and he then would have pulled a Ricks Natural Star and stopped to a walk after a half-mile or so. The stewards saved Paolucci the $12,000 it would have cost to run the horse, but it's his money and he should have been given the opportunity to spend it.

Another option would have been for the stewards to order May B to run as an entry with War Story. That would have saved a few greenhorns from foolishly betting on the horse and maybe served as a compromise. Then again, betting on horses is a buyer-beware type of game and the role of stewards does not include keeping people from making dumb bets.

The stewards did not bar May B from running earlier on the card, in the seventh race, an allowance. He showed speed and faded to finish last at 31-1. No one said he was a good horse, but that's not what this controversy was about. Either ban all rabbits or let all rabbits run. There's no room here for gray areas.

Little Pharoah Gets the Job Done

The Labor Day weekend and the Saratoga and Del Mar meets concluded Monday with Grade I races for 2-year-olds in the GI Hopeful and the GI Del Mar Futurity. But it's possible that the juvenile race that will turn out to have had the most star power down the road was a maiden Saturday at Del Mar.

A half-length win in a maiden race may not be the stuff of future legends, but it's noteworthy that the runner-up was a $1.05-million purchase at the Ocala 2-year-old sale in March. Might the second-place finisher, Instilled Regard (Arch), a very expensive purchase by Lawrence Best's OXO Equine LLC Stable, also be a future star? These are two 2-year-olds to keep an eye on.

That last week marked the 61st anniversary of the most notable achievement ever by Arrogate. No, not that Arrogate.

In the 1956 Del Mar H., Arrogate won to give Johnny Longden his 4,871st victory, moving him ahead of Sir Gordon Richards as the winningest jockey of all time. He would win the same race a year later, one of nine stakes races won during his a career that consisted of 83 starts.

By the way, Arrogate is a real word and not a very flattering one. It means: “to assume, or claim as one's own, unduly, proudly or presumptuously; to make undue claims to, from vanity or baseless pretensions to right or merit.”