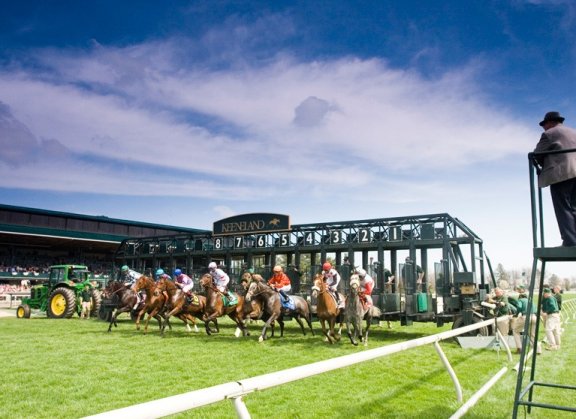 Because it is Keeneland and because there was such a backlash, the decision to raise the takeout at the fall meet there was a story that resonated throughout the industry. Would Keeneland achieve its goal, bringing in enough extra revenue through a takeout increase to raise purses? Would horseplayers be so angered by the increase in the take that they would boycott the meet or bet less on it? Or, as is so often the case when takeouts are raised and, even, lowered, would the horseplayers not respond? Would the change in takeout do nothing to change their wagering habits?

From the time Keeneland announced there would be a takeout increase for the fall meet, those were the questions everyone was asking. Now, and only now, can they be answered. The meet ended Saturday and the final betting numbers were not pretty. All sources handle was down 8.4%.

There are dozens of issues and areas to explore here, but the most important one is this: Keeneland's goal, to bring in more money to raise purses, was not achieved. The decline in handle certainly offset whatever extra revenue was brought in by raising the takeout. Not only did Keeneland not bring in any additional money to raise purses, had the numbers been a little worse and the meet a little longer they may actually have had to lower purses at upcoming meets.

Keeneland's next move seems obvious. They should announce that they tried something, it didn't work out as they had hoped and, therefore, the takeout level at the 2018 spring meet will return to the same levels that it was pre-increase. If nothing else, that would be a PR home run and turn the hats they have been wearing lately from black to white.

Let's hope they don't instead try to spin this as an experiment that did not work due to mitigating factors and one that deserves another chance. The 2016-versus-2017 numbers are apples to apples. And, if anything, all things being equal, the handle should have gone up. The main factor that drives handle is field size and the fields were larger at the 2017 fall meet than they were the year before. Keeneland averaged 9.2 starters per race at the meet as compared to 9.1 last year. While that's a very small increase, it shoots down any arguments that handle was affected by some bad weather or some races coming off the grass.

All sources handle at the meet dropped by $11.2 million, from $132.9 million to $121.7 million. Was it the boycott called for by the Horseplayers Association of North America? Was it that by lowering payoffs, the bettor had less money in their pockets and that affected churn? Did Keeneland somehow underestimate the huge impact the computer-rebate players have on handle and did not make sure the takeout increase did not hurt them and lower their level of play? It could be one or the other or all of the above. But it doesn't really matter. Handle was down, Keeneland's net revenue from handle certainly took a hit and there's not going to be a purse increase–at least one that is the result of the handle increase.

No one wants to admit they were wrong, but we're still in no-harm-no-foul territory. Keeneland has a chance to announce the take is going back down. If so, they will be forgiven and the 2017 fall meet and the poor handle numbers achieved during the 17-day run will soon become a distant memory.

Let's say you pick up a gallon of milk off the shelves at your local grocery store and price tag says $3.25. Eight or nine seconds later, when you get to the checkout counter, the clerk tells you the milk actually costs $6.50, that the price has changed during those few seconds it took you to get from the dairy counter to the front of the store. You'd be outraged and would never shop at that store again.

But virtually the same thing goes on every day at racetracks across North America, and few examples were more blatant than Thursday's seventh at Hawthorne, a nickel claimer. As the last horse was being loaded into the gate, a horse named Offlee Fun (Offlee Wild) was listed at 7-1 on the board. The field broke, and Offlee Wild, who was among the early leaders, was no longer 7-1, but 7-2. That's half the price he was when being loaded into the gate.

The horse lost, finishing second. But that's not that point.

Granted, pari-mutuel wagering is not a fix-odds game, but prices aren't supposed to drop in half in the matter of a second or two. Anyone betting on Offlee Fun had every right to be outraged. They had every reason to believe they were betting on a horse that would have paid $16 if it had won and not $9. They are customers, and they were made to feel like a fool.

Hawthorne is a media-friendly track that has always seemed to be as transparent as possible, but racing officials there were only able to offer a few details. The information they provided was that a “large” win wager was made late in the game and that it was not placed on-track, in Illinois or through the tote provider they use, which is Sportech.

That's not much in the way of information, but there's very little doubt as to what happened here. Based on the size of the pool and the amount of money it would have taken to cut that horse's odds down from 7-1 to 7-2, a win wager in the neighborhood of $3,000 was made on the horse at the very last instant. In fact, according to Hawthorne management, the bet was placed at 6:17.32 local time. The race replay shows that the field left the gate at 6:17.26. That doesn't mean someone past posted the race. No matter how good a tote system is, it can take about 10 seconds from the time a bet is place to the time it gets recorded in the pools. But the time line also shows that the bet was made no more than a second or two before the race started.

Who made it? You'll never get a name, but we know with almost certainty what kind of bettor placed the wager. More and more, pari-mutuel pools all over the world are being dominated by bettors with sophisticated computer software that allows them to recognize overlays and bet at the last possible second, too late for anyone else to adjust their wagers. These are people betting truckloads full of money and are getting huge rebates. The racetracks love them because they are pumping millions into the handle.

But at what cost to the sport?

They're making money because of the rebates that are not available to Joe Average Horseplayer and because they are feasting off the small guy and the dumb money. In time, when a gambler keeps getting beat up by someone with an advantage over them, they either go broke or go away and spend their money elsewhere. The computer players are also causing huge fluctuations in the odds that come very late and that makes betting on horses look like a game of three card monte.

In the short run, they might be good for the tracks taking their action. In the long term, they almost have to do lasting damage to the game. What's happening has to be driving a lot of customers away. This is not a Hawthorne problem. This is an industry problem.

As for the late odds changes, there is a simple fix. All tracks should close down their windows a minute before the race is off. Will it happen? No chance.

You can question why Paolucci would want to run a first-time-starter in a Breeders' Cup race and that the pre-entry wasn't accepted isn't exactly shocking. But Paolucci does have a point when he says there needs to be a rule. Would they really have denied the entry of a first-time-starter from Bob Baffert, Todd Pletcher or Aidan O'Brien? Nikki's trainer is Anthony Quartarolo. It's a legitimate question and raises issues about the arbitrary nature of the decision. If you don't want first-time starters in the Breeders' Cup just make a rule banning them. Problem solved.

Paolucci may have set some sort of unofficial record when it comes to having his entries refused from big races. This is the same owner who tried to enter a claimer named May B (Werblin) as a rabbit in the GI Woodward S. only to be told by the NYRA stewards that the horse couldn't run. Again, rather than picking and choosing who can run, which rabbits are OK and which are not, perhaps, a firm criteria needs to be in place.

Congratulations on your win in the G1 Cox's Plate with the great Winx (Aus) (Street Cry {Ire}). But enough is enough when it comes to beating up on the same horses race after race in Australia. Don't you want to showcase this great mare to the rest of the world? Don't you want to find out how really good she is? The phone number for the good folks at Royal Ascot is +44 844 346 3000. I'm sure they'll be happy to take your call.

Keep an Eye On…

Because he stands in Ireland, Galileo (Ire) hasn't had many starters in maiden races in North America, particularly when it comes to non-stakes events. His stars usually come here ready made from European stables, but he appears to have produced a runner that started her career here and will likely go on to major wins.

In her first career star, the 3-year-old filly Galileo Gal (Galileo {Ire}), didn't show much, finishing fifth in a maiden special weight race for trainer Mark Casse and owner Gary Barber. On Friday, they wheeled her back, gave her Lasix and she put on a show. In a mile-and-a-sixteenth turf maiden at Woodbine, she won by 5 3/4 lengths, eased up under the wire by jockey Patrick Husbands. That she got off to such a late start in her career raises some red flags, but she looks like a good one.