Week in Review: Irad's Magic on Display in Apple Blossom 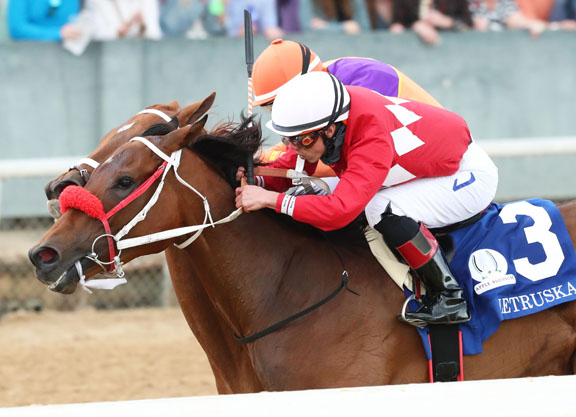 It happened again on Saturday, just as it seems to happen on every big day at the track. Irad Ortiz, Jr. won a race he wasn't supposed to win. When a race, in this case the GI Apple Blossom H., comes down to a nose at the wire and Ortiz is on the winning end, he probably made the difference. He's that good.

Ortiz picked up the mount on Letruska (Super Saver) for Saturday's race, riding her for the first time. Still, it looked like the best the 5-year-old mare could hope for was a third-place finish. The Apple Blossom was supposed to be a two-horse race between superstars Swiss Skydiver (Daredevil) and Monomoy Girl (Tapizar). Letruska had solid credentials and a couple of Grade III wins on her resume, but it didn't appear that she had the ability to defeat either of the Eclipse Award winners. Or so everyone thought.

Midway on the far turn, it was clear that Letruska was going to put up a fight. She clung to a narrow lead over Monomoy Girl as Swiss Skydiver started to back out if it. But when Monomoy Girl poked her head in front past the quarter-pole, the race appeared to be over. She was the favorite, the class of the field and had all the momentum.

For the next 20 seconds, Monomoy Girl held the lead. It was not until the last three jumps or so  that Letruska drew even before putting her nose in front at the wire. It seemed that Ortiz knew that Letruska had just enough left to make one well-timed surge before the wire.

“I go the right trip,” he said. “She likes to be on the lead. I let her go, let her make the lead. She relaxed and I was able to save something for the end. She responded really well.”

As an analyst on the “America's Day at the Races” show on the Fox Sports networks, former rider Richard Migliore has seen Ortiz win hundreds of races, many of them coming when he was not necessarily aboard the best horse.

“You have to have natural ability to begin with, which he has in spades,” Migliore said.”He has incredible natural ability. He's very strong, so, from the physical side he is gifted. When it comes to the mental side, he has the mentality of a champion, which is very hard to maintain over an extended period of time. He's done that. He loves what he is doing and he's always enthusiastic, and it doesn't matter if it's $10,000 claimer or a Grade I. You can see the enthusiasm whenever he is riding. I am a firm believer that horses feed on the energy from the people around them, and when that happens a horse will give his very best. Irad brings that to the table on a daily basis.”

Migliore said that in the Apple Blossom Ortiz made all the right moves at the right time.

“I understand that this is horse racing and you need the horse underneath you, but this was one of those races where the rider totally made the difference,” he said. “It was a matter of him not getting in Letruska's way. Did you see how comfortable she was down the backstretch? He was allowing her to run at her natural gait, where she's just very happy and very efficient. At the same time, he was saving horse. He is not getting in her way and he was not using her.

“Most good riders know the habits of the horses around them and the other riders around them. Monomoy Girl does have a tendency, when she gets to the front, to idle a little bit. Irad, I am sure, knew that. When he really set Letruska down was when Monomoy Girl got in front of her. He anticipated that she was going to idle and bit and when that happened he was able to get Letruska to impose her will on Monomoy Girl.”

Ortiz, 28, has been on top for a while. He's won the Eclipse Award as the nation's top jockey three years in row and has led the nation in both wins and earnings every year since 2018.

Yet, he seems to have taken things to another level this year. At the Gulfstream championship meet, where he was riding against many of the best jockeys in the country, he demolished the competition, winning 140 races, 42 more than runner-up Paco Lopez. On his first day back in New York, he won six races on the card topped by the GII Wood Memorial S. He's winning at a rate of 28% this year, a career best for him. He's on a pace to win 480 races this year, which would also be a career best.

He's by far the best jockey in the country, and in the Apple Blossom he showed you why.