Week in Review: How Good is Jolie Olimpica? 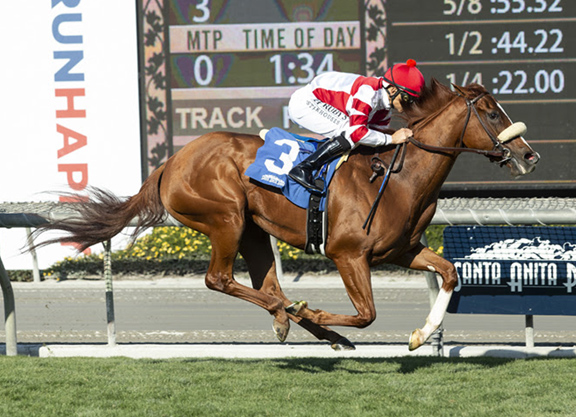 The older filly and mare division could be sensational this year. Midnight Bisou (Midnight Lure) is coming off a stellar 4-year-old campaign and will be seen next battling the world's best horses in the Feb. 29 Saudi Cup. Monomoy Girl (Tapizar) is set to return to the races after a layoff of more than a year and will try to duplicate her 2018 form, when she was an Eclipse Award winner and the winner of the GI Breeders' Cup Distaff. And now you can add Jolie Olimpica (Brz) (Drosselmeyer) to the list of those who could have a 2020 season to remember.

Normally, a win in a 5 1/2-furlong Grade III stakes on the grass wouldn't lead to much excitement about a horse, but when Jolie Olimpica won Saturday's Las Cienegas S. at Santa Anita, she gave off the impression that she has just gotten started on her 4-year-old campaign.

She was the mystery horse in Saturday's stakes at Santa Anita, making her first U.S. start after winning all three of her outings in her native country. In her most recent start there she won the June 9 G1 Jockey Club Brasileiro over males. But how would that form hold up when she faced presumably tougher competition in the U.S.? The answer came with a 1 1/4-length win in the Las Cienegas.

“She's a filly who was very impressive in her three starts in Brazil before she was purchased,”said winning trainer Richard Mandella. “When we got her she trained with a lot of enthusiasm and sure seemed quick enough. That's the reason I started her out short like that.”

Mandella said that Jolie Olimpica was found in Brazil by bloodstock agent John Fulton, who suggested to owner Rick Porter that he buy the filly.

“I have to give a lot of credit to John Fulton,” Mandella said. “He sold us two horses from Brazil, this filly and Bal a Bali (Brz) (Put It Back), who ended up winning a Grade I for us. So, our friendship and business relationship has been pretty fruitful.”

For Jolie Olimpica to be a top horse in her division, she's going to have to move on from grass sprints, which is the plan.

“We'll take it one step at a time, but we already took a pretty big step getting started in a Grade III,” Mandella said. “As powerful as she ran and even though it looked like she won easy, she's not a real big filly and she gave a lot Saturday. Because of that, we'll have to make sure we don't come back too quick. In the next week or two we'll start thinking about what the next step will be. I'll definitely look at going further and at some point trying the dirt.”

Saturday's card at Gulfstream included four maiden special weight races for 3-year-olds, plus an allowance race for that division. So it was no surprise that from among the collection of well-bred, high-priced horses that ran there Saturday, several horses emerged who could potentially to be in the mix come the day of the GI Kentucky Derby.

'TDN Rising Star' Violent City (Violence) stood out from the crowd, dominating in a six-furlong maiden. Not only was he an impressive winner, but it's likely that he will improve significantly in future starts.

With this one, it helps to read between the lines. Violent City is trained by Ian Wilkes, who rarely wins with first time starters and whose horses almost always get much better in their second and third starts.

“I think he could get better,” Wilkes said Sunday morning. “He was fit and ready to run, but I hadn't tightened the screws. I think there's a lot of improvement left in him.”

Wilkes knew Violent City, a $330,000 Keeneland September purchase, was quick and had talent. He told Julien Leparoux to ride the race any way he liked and Leparoux decided to be aggressive. Breaking from the two post, Violent City was rushed to the lead before drawing off to win by four lengths. Palm Springs (Uncle Mo), a $1-million yearling purchase who was bet down to 3-5, was a non-threatening second.

“I told Julien before the race we might surprise a few people with this horse,” Wilkes said.

It's still hard to imagine that a horse who breaks his maiden going six furlongs in January can make it to the GI Kentucky Derby, but fellow 'Rising Star' Justify (Scat Daddy) rewrote the rules in 2018 when he began his career Feb. 18 and went on to win the Triple Crown. We may not see another Justify for decades, but his success has given all trainers with late bloomers confidence that a horse can skip his 2-year-old year and catch up in time to be a factor in the Derby.

Is this a Derby horse?

“If he is, he'll take me there,” Wilkes said. “I am sure that Bob [Baffert] did the same thing with Justify. If he's good enough, he'll take him there and he took him the whole way. I'm going to let the horse dictate things. Most likely coming off a six-furlong maiden, I'll have to come back in an allowance. I don't want to throw too much at him and have him go backwards. I'd rather just go the next step and see where we can go from there.”

The only knock on Violent City's performance was that it resulted in a modest Beyer number of 81. He will need to do better to knock off a major Derby prep, but everything about this horse tells you he's just getting started.

It was a big afternoon for the sire Violence, as two of his progeny earned 'Rising Star' status. The other was No Parole (Violence), a 13 1/4-length winner Saturday in a Louisiana-bred allowance race at Fair Grounds.

Another winner on Saturday's Gulfstream card that will likely be heard from again is Ny Traffic (Cross Traffic). He had been erratic before Saturday, but had turned in a pair of outstanding races while campaigning at Parx for trainer Harold Wyner. He was turned over to Saffie Joseph Jr. before Saturday's race and, like so many others in the Joseph barn, showed marked improvement in his first race for his scorching hot trainer. Ny Traffic won the mile-and-a-sixteenth allowance race by 6 3/4 lengths.

“We've had him for six, seven weeks and each work was a little better,” Joseph said. “We were trying to get him to a point where he'd run back to his best races. His last work was visually eye-catching and I thought that if he ran to that work we'd be tough in that race. I was very respectful of the competition Saturday and was very pleased with how he won. And I think there's more to come from him.”

Joseph said he has not picked out Ny Traffic's next race but said it will come in a Kentucky Derby prep race. Joseph won with still another 3-year-old colt Saturday as Disc Jockey (Bodemeister) won a starter allowance in his first start after being claimed and he also took Saturday's GIII Tropical Turf S. with Tusk (Tapit).

Down the Hill at Santa Anita

Is it time for Santa Anita to start carding again the 6 1/2- furlong down-the-hill races?

The Las Cienegas was the most recent Santa Anita stakes that has traditionally been run at 6 1/2 furlongs only to be moved to the shorter 5 1/2-furlong distance. The same thing happened to last year's 2019 GI Breeders' Cup Turf Sprint.

The 6 1/2-furlong races were put on the shelf after Arms Runner broke down and had to be euthanized while running in the Mar. 31 GIII San Simeon S., a move that was said to be part of the track's efforts to make the racing as safe as possible.

According to the Los Angeles Times, Santa Anita submitted paperwork to the California Horse Racing Board prior to the opening of last fall's meet that indicated its desire to start running the down-the-hill turf sprints again. After receiving negative feedback from the CHRB, Santa Anita management didn't continue to pursue a return to the traditional turf sprint distance.

If the 6 1/2-furlong turf sprints are more dangerous than other races, then they should be gone for good. But where is the evidence that that is the case? If it doesn't exist, then it is time to bring them back. They are big part of what makes Santa Anita unique.