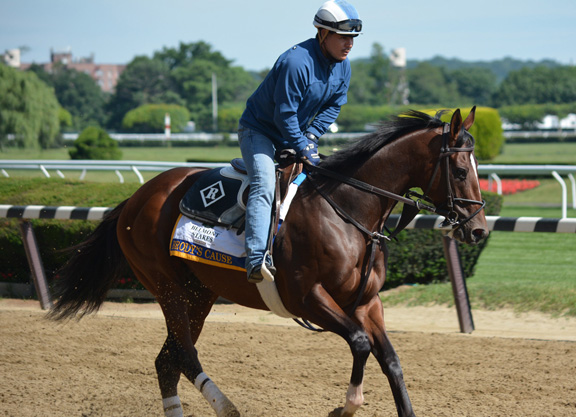 Governor Malibu (Malibu Moon) was once again the first recognizable sophomore sporting a blue, white and yellow Belmont S. saddle towel, heading out for a gallop a little after 6:05 a.m. The New York-bred, a good second in the GII Peter Pan S., has finished in the money in all seven of his previous career attempts.

Suddenbreakingnews (Mineshaft), a rallying fifth in the GI Kentucky Derby, got his first look at Big Sandy after arriving from the Bluegrass late Tuesday afternoon. With trainer Donnie Von Hemel in attendance, the handsome bay–fitted with his regular white shadow roll–set up shop by the outer rail near the gap on the clubhouse turn to take in his new surroundings, then glided over the track nicely during some light exercise.

The ever-popular Lani (Tapit), a respectable fifth in the GI Preakness S., began to jog at 6:40 a.m. before later covering five furlongs in a sharp 1:00.43 (2/16). Hey, here comes another gray with red wraps and an exercise wearing a red long-sleeved shirt. Oh wait…. That’s just Lani again finishing up his third lap around the track at 7:10 a.m. Fitness certainly shouldn’t be a concern for the final leg of the Triple Crown for the pride of Japan, that’s for sure.

There was still more to come after the renovation break as well.

The maiden of seven career starts Trojan Nation (Street Cry {Ire}), never a factor in the ‘Run for the Roses’ after getting checked at the start, exited the tunnel at 8:50 a.m. and had a nice bounce to his step while making his first appearance over the 1 1/2-mile oval. The GI Wood Memorial S. runner-up made the trip from Paddy Gallagher’s Southern California base Tuesday afternoon.

While Belmont S. 9-5 morning-line favorite and Preakness hero Exaggerator (Curlin) enjoyed the spotlight, and rightfully so, at the nearby training track during his jogging day after breezing five panels Tuesday, there were two pretty nice horses in their own right on display on the main oval.

A couple of things you can always count on during the Triple Crown races. One, the Dale Romans horses will make a terrific impression each morning. And two, they will head to the track after the break.

The Preakness runner-up Cherry Wine (Paddy O’Prado) was the first of the Romans duo to come out to gallop a little after 9 a.m. With his ears forward and awaiting command, the handsome gray continues to seem to enjoy his training every day he spends in New York. The track was much more quiet for his multiple Grade I-winning stablemate Brody’s Cause (Giant’s Causeway) about a half hour later, who also continues to get over the track nicely in his morning preparations.

A big group of schoolers took to Belmont’s beautiful paddock at 11:30 a.m. while the post position draw for the final leg of the Triple Crown was about to kick off at Rockefeller Center in New York City.

Minus the white bridle, school was also in session for likely Belmont S. pacesetter and former Pletcher trainee Gettysburg (Pioneerof the Nile), who was among a group of Steve Asmussen-trained runners under the supervision of assistant Toby Sheets while being walked by two handlers.

Cupid (Tapit), off since a disappointing 10th-place finish as the 4-5 favorite in the GI Arkansas Derby, also caught the eye while being schooled by long-time Bob Baffert assistant Jimmy Barnes. He headlines Saturday’s opener in the $150,000 Easy Goer S.