Home » Archive » Shared News » Webster Not Shying Away From Winx

Webster Not Shying Away From Winx 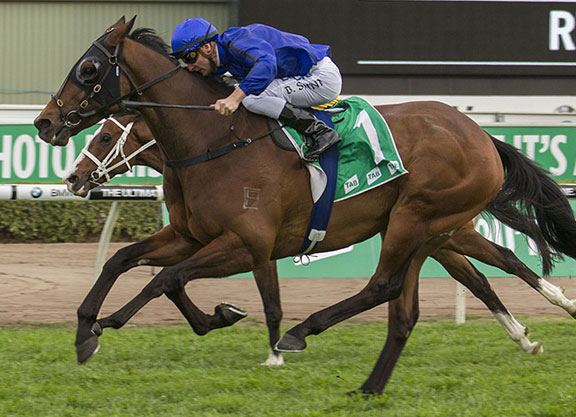 Even with the prospect of A$440,000 being up for grabs for finishing second in the G1 Cox Plate at Moonee Valley Oct. 28 there doesn't appear to be too many rivals relishing the prospect of taking on Winx (Aus) (Street Cry {Ire}) in the A$3m event. However one trainer who isn't running scared is Pat Webster and he intends to nominate his G1 Epsom H. winner Happy Clapper (Aus) (Teofilo {Ire}) for the 2000m race. “We will be paying up tomorrow for the Cox Plate and the intention is to definitely run if all goes well,” Webster told Racing And Sports on Monday. Happy Clapper ran three times in September, winning the G2 Tramway S. at Randwick Sept. 2 before chasing home Winx in the G1 Colgate Optic White S. over the same course two weeks later. That run preceded his finest hour a fortnight later when he defeated Tom Melbourne (Ire) (Dylan Thomas {Ire}) in the Epsom back at Randwick Sept. 30. Webster intends to keep Happy Clapper on the go and will let the 7-year-old take his chance in this weekend's G3 Craven Plate and the trainer is happy with his condition ahead of Saturday's A$500,000 contest. “He does exactly the same thing between runs. He has an easy first week and then steps it up the second week. So he will have a serious gallop on Tuesday morning. He can't get any fitter so it's just a case of maintaining that.”