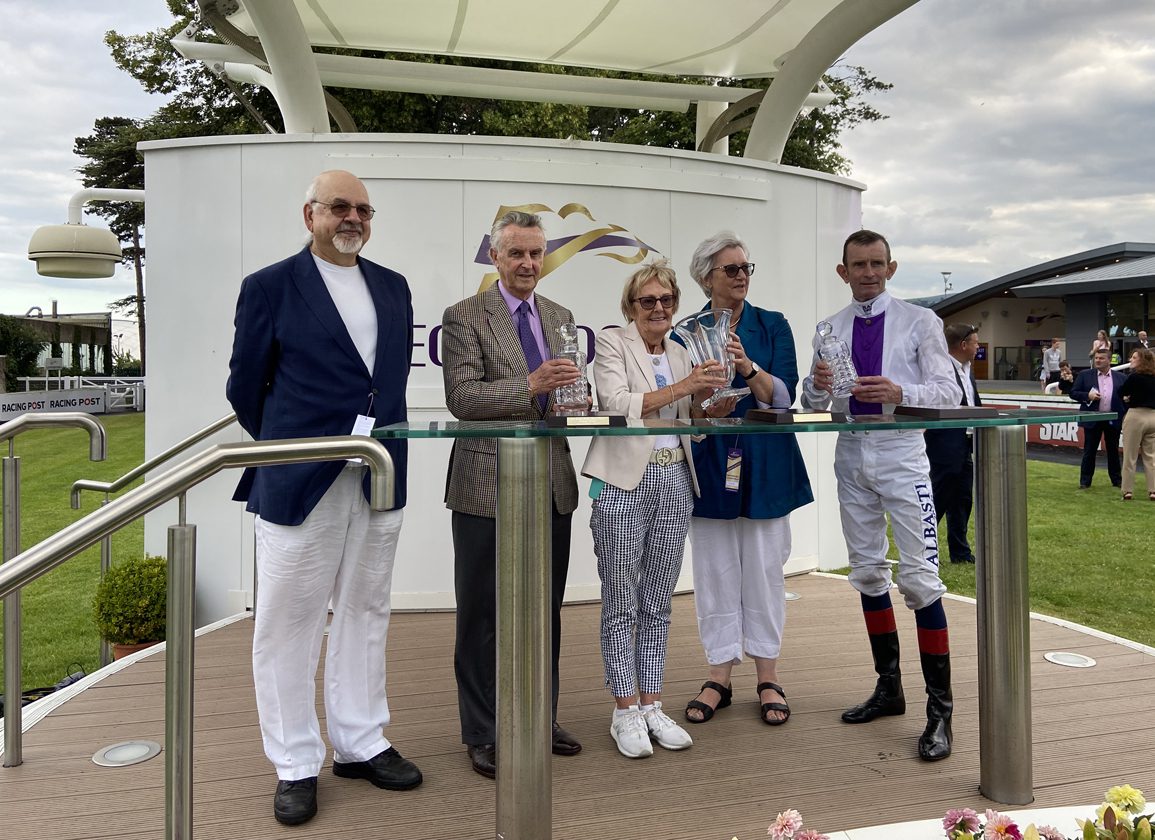 They have reached dizzy heights as breeders and now Gillian and Vimal Khosla are concentrating on achieving big-race success as owners with Fennela (Ire) (Sea The Stars {Ire}), a daughter of their outstanding broodmare Green Room (Theatrical {Ire}), in Saturday's G1 Juddmonte Irish Oaks.

The Khoslas know a thing or two about breeding top-notchers. Green Room is the dam of three Group 1 or Classic winners and the owner-breeders behind the 20-year-old blue hen are hoping there is still more to come.

Lord Shanakill (Speightstown) was the first horse to put Green Room in lights. A high-class 2-year-old, he then went on to win the G1 Prix Jean Prat at Chantilly in 2009 before retiring to stud the following season.

Then came Together Forever (Ire) (Galileo {Ire}), who fetched €680,000 at the Goffs Orby Sale in 2013 before going on to land the G1 Fillies' Mile at Newmarket for Aidan O'Brien and Coolmore Stud.

The Green Room secret was well and truly out by the time MV Magnier was forced to spend €900,000 on Together Forever's younger sister, Forever Together, at the Goffs Orby Sale in 2016.

But it proved money well spent when, ridden by Donnacha O'Brien, Forever Together romped to Oaks glory at Epsom, again trained by Aidan O'Brien.

Put mildly, Green Room has an outstanding track record of producing top-class racehorses and in Fennela, the only filly the Khoslas have kept out of their superstar broodmare, they are hoping that pedigree can shine through again at the Curragh on Saturday.

“The form says no but, as an owner and breeder, you couldn't do it without having hope and optimism, so we're optimistic about Saturday,” said Vimal with a heavy dollop of realism at Leopardstown on Thursday.

The Khoslas were back at Leopardstown for the first time in over two years on Thursday. It was an important visit, too, as they once again sponsored the G3 Green Room Meld S., and handed over the trophy to Jim and Jackie Bolger after Boundless Ocean (Ire) (Teofilo {Ire}) ran out an impressive winner.

The husband-and-wife owner-breeders will be hoping that the roles will be reversed on Saturday and that they will be collecting a trophy after the Irish Oaks but are by no means underestimating the task at hand.

“We think she might want a mile-and-six-furlongs in time and she's only three so she may even do better next year. It's exciting to be a part of such a brilliant race and we're hopeful of a good run. Every position she finishes better than last will be a bonus.”

Asked to compare how the build-up to a Classic compares as an owner to a breeder, he added, “They're two totally different animals. I have never won a Group 1 and I would love to win one as an owner. I would feel like I have arrived if we managed to win the Oaks.”

The Khoslas made their fortune in the travel business and, with Green Room, they have been on the journey of a lifetime.

On their star mare, Gillian said, “Green Room has a colt foal by Waldgeist (GB). It's obviously his first crop so that will be exciting. She's extremely well-looked after by everyone down in Ballylinch Stud–there were pictures taken of her recently and she still looks amazing at the age of 20. She had a couple of years off so the Waldgeist colt is all she has coming through.”

Asked why they chose to set up their breeding and racing enterprise in Ireland, she responded, “It's part of the culture over here. It's very professional but it's also very warm and comforting and people are happy to share. We've learned so much, particularly in Ireland.”

The Khoslas are learning from the best. Their seven-strong broodmare band is based at Ballylinch Stud, of which, John O'Connor has been a massive help to the couple, while Jessica Harrington has produced the goods on the track.

“It has all happened by accident,” Vimal explains. “I bought a filly called Polly Perkins (Ire) (Pivotal {GB}) back in 2004. She had won two listed races when I bought her and was shaping up to be something special but she damaged a stifle during the winter and couldn't race again.

“I hadn't a clue about racing at the time, had only been involved in the sport a few years but someone recommended that we breed from her. She did well as a broodmare and we actually kept one of her fillies and had our first foal from her this year.”

The Khoslas describe Ballylinch Stud, based in the picturesque countryside of County Kilkenny, as an idyllic place for their broodmares to be based and O'Connor's expertise and knowledge about breeding comes in for special recognition from Gillian.

She said, “Particularly the expertise of John O'Connor and all the team at Ballylinch, the knowledge they have about breeding, and they are so good at sharing it.”

There are plenty of wealthy businessmen and women who get involved in racing purely for the entertainment factor that goes with a good day out at the races. Not the Khoslas. They have adopted a hands-on approach to their operation and it's working.

Vimal joked, “We know we are succeeding because John is laughing at us less and less. I used to send all the mating plans to John and he'd fall around the place laughing. He would do it very kindly I must say,” to which Gillian admitted, “We still go a big rogue sometimes.”

Asked to explain, Vimal said, “We bought a Sea The Stars (Ire) mare called Compostela (GB) a few years ago. She never raced, but is a tank of a filly, and so far she has bred a Group 3 winner [Stela Star (Ire) (Epaulette {Aus})] and her other two foals of racing age have won as well. She's on the up.

“We like being quirky with sense. We're not into mini-skirts or fashion and don't pick a stallion because he's in fashion. We chose a stallion and a mare if we think we can breed something decent.

“We went for them because the fees were relatively low, but also because they were tremendous racehorses on the track. But, you learn.”

The Khoslas have learned alright. Now it's over to Fennela to teach her rivals a thing or two on Saturday and continue the trend of Green Room's progeny hitting the heights on the racecourse.