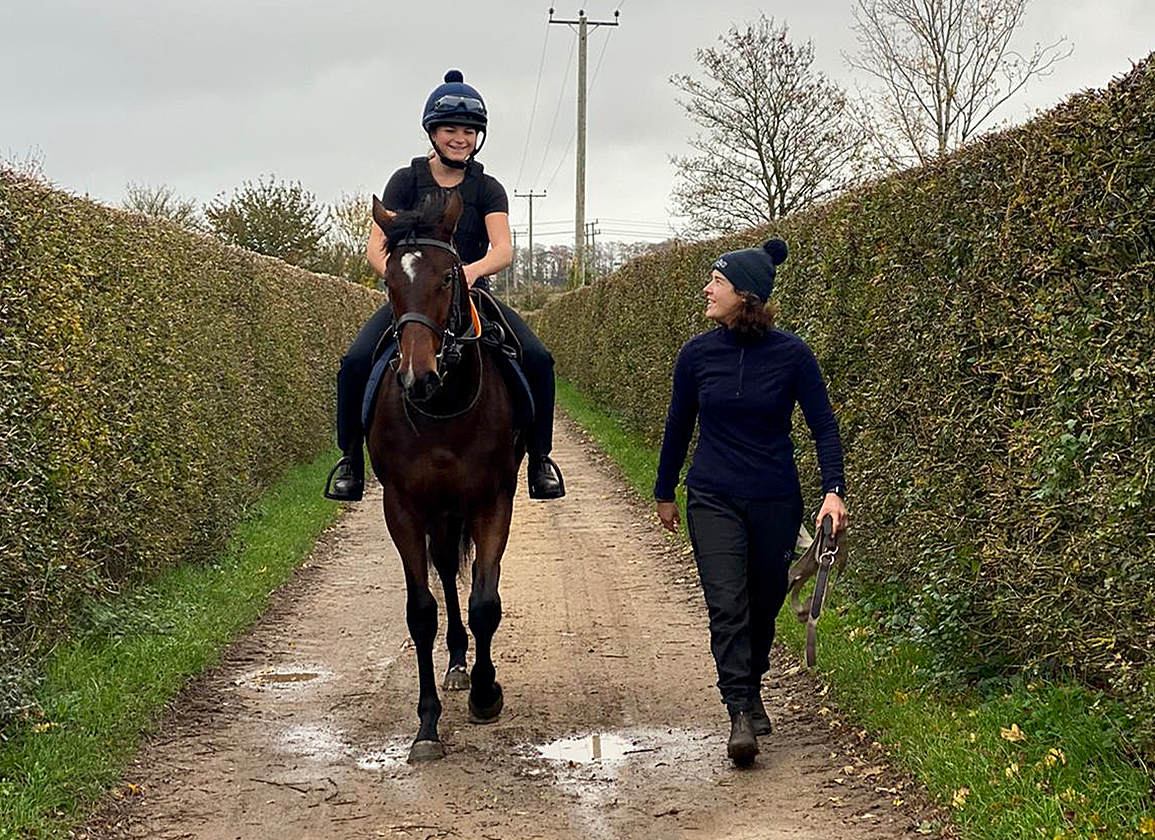 Ellie Whitaker and Tegan Clark clearly remember the empty silence that followed an email blast out to the industry upon the launch of WC Equine.

“We had a list of trainers' emails,” recalls Clark. “And we put together an email saying we're here, this is what we're doing, along with background of what we've done before, and emailed 93 of them.”

Whitaker takes up the story. “We got three responses, all saying good luck! It's about selling a product at the end of the day and we didn't have a product to show people. We had all our social media set up but nothing to show for it. We just needed one person to send us one horse.”

It is to the pair's credit, however, that they had already secured the regard of trainer Roger Varian as well as Brendan Morrin of Pier House Stud. A base at Robert Cowell's Bottisham Heath Stud in Six Mile Bottom also had plenty to recommend it, allowing Whitaker and Clark to take advantage of Newmarket's facilities without being in the hustle and bustle of the town itself. And so with a barn and the hope of a handful of horses to come, WC Equine was launched.

“We started with no horses,” says Whitaker. “Then Kevin Philippart de Foy, who is a good friend of Tegan's, sent us our first yearling.

“We had also worked with Brendan Morrin at Pier House Stud and I would joke with him at the sales. If something good didn't sell, we'd keep asking 'can we breeze it, can we breeze it?'”

If you don't ask, you don't get, so the saying goes, and so it was with two Pier House Stud-bred fillies that WC Equine entered the breeze-up sector at last year's Tattersalls Guineas Sale. In the meantime, Varian had stuck to his word and sent a group of youngsters to the pair for pre-training. Their gratitude is tangible but it works both ways and Varian was evidently impressed enough to send another sizeable batch of young horses to them this season.

“I worked for Roger around the time he had Postponed, and he had always said 'give me a call when you set up',” says Clark. “And so I rang him to say we had a few boxes and he said, 'I'll definitely support you'. He basically kept us afloat that first year–he was very good to us, and we've done a few more for him this year.

“But then I think the breeze-ups really motored us forward and sparked a bit of interest.”

Of course, there is no better place to advertise than the public arena and while Clark and Whitaker were gaining respect as for their pre-training ability, it was arguably their debut effort at last year's Guineas Sale that drew greater attention to their name.

WC Equine headed to the sale with two fillies on behalf of Pier House Stud, namely a first-crop daughter of Aclaim (GB) and another from the first-crop of Galileo Gold (GB). Both found new homes but particularly impressive was the Aclaim filly, who changed hands for 60,000gns to Rabbah Bloodstock.

“We liked her and we knew she was the better of the two,” says Clark. “You'd pull up after a gallop and think, yes this is nice.”

Whitaker adds: “We thought she was a nice filly but we went there thinking we'd be happy at 30,000gns. We kept her under wraps for the majority of the winter. The horse physically was always going to get there but it was about training her mind as much as anything else.”

Sent to James Tate and named Royal Aclaim (Ire), she made a smart winning debut against colts less than a month later over 5f at Newcastle where her victims included none other Perfect Power (Ire) (Ardad {Ire}), subsequently winner of the G1 Prix Morny and G1 Middle Park S. who is now around a 10-1 shot for the 2000 Guineas, and Fearby (Ire) (Havana Gold {GB}), who would go on to run second in the G3 Molecomb S.

“The money wasn't the be all and end all,” says Whitaker. “It was a bonus but it was seeing her go out and win, and saying the proof is in the pudding, we've done the job essentially. That was more rewarding than having a bit of cash in your pocket.”

Fast-forward a year and WC Equine is thriving. By mid-March, the pair had broken in 60 yearlings in batches, with a waiting list of others to come in. Included in the mix are five breeze-up horses slated to fly the flag at this week's Tattersalls Guineas Sale in Newmarket.

It is the result of a deep grounding within the business allied with an appreciation of hard work and love of the animal.

“I was two when my mother first sat me on a horse,” says Whitaker. “I did a lot of hunting and eventing. I sort of fell into racing.

“I was about 15 when I went to work for Mark Dwyer and I was there for about four years. I did the sales circuit for a year and then went to Roger Marley's [Church Farm Stables]. I went in as a head girl, I was 18 and chucked in at the deep end but I learnt a lot in a short space of time. I think you take a piece out of everything and put it into your own. You learn in abundance with people like that–and also how not to do it. They both work extremely hard. Both him and Mark rode out back then. They'd get up, muck out, feed and ride out.

“Roger has been very helpful to us, and Mark and Blarney [Brendan Holland of Grove Stud] would be the same. They're always there to help. It's so competitive but they've been there to help and assist, and congratulate as well.”

She continues, “I was with Roger for about a year and a half and from there I went to Newmarket and to the Godolphin pre-training yard on Hamilton Road, which was a whole different way of doing things. When they dispersed, I went to Charlie Appleby's at a time when he had good horses like Cross Counter and Line Of Duty. I broke in Pinatubo–it was year of some seriously good 2-year-olds there. It's not often you get on every lot and you go 'wow, that's ok'. It was a real eye-opener.

“And after that I came here to Robert's [Cowell]. I did two and a half years as a work rider and then launched WC.”

South African-born Clark has a similarly deep background in racing.

“My first job in racing was with Olly Stevens and before we started here, I had worked in Newmarket for about four years,” she says. “I did a season with Roger Varian and then worked the rest of time for Simon Crisford, who gave me the opportunity to go out to Dubai.

“I've been very lucky to be involved with some lovely horses. I remember riding Lightning Thunder, who was second in the 1000 Guineas. I took her up the canter and remember thinking 'this is a different class'. There was a real class to her, she did it so easily and professionally.

“Postponed was at Roger Varian's when I was there, and just to be involved with a horse like him was amazing. When I was at Simon Crisford's, he had [G2 winner] Ostilio and [G1 miler] Century Dream. Ostilio was in my section, I had a couple of spins on him, and he was a lovely horse to deal with. I also did a couple of seasons breaking in some horses with Richard Morgan-Evans. It's a seriously good operation, they work so hard, and he was very willing to help and teach.”

Whitaker and Clark today operate at Bottisham Heath out of two barns and a stable block. They have access to a variety of gallops but also the luxury of being able to work the horses in town if needed.

“They will go into town for an educational canter,” says Whitaker. “They'll do three or four bits in town but they'll do most of their work here. We've proven that we can get them fit here.

“We've got walkers and we put in a lunge pit ourselves, which works well as an arena. We can put them in the dummy stalls, which are great, and there's the opportunity to turn them out as well.”

Clark adds: “It's a good place to chill out, they can relax coming from town.

“This is something that we've always wanted to do. It's pretty basic but it works. They're really healthy barns. And we ride them all ourselves. When we had 15, we did everything pretty much ourselves–muck out all morning and ride all afternoon. Now we've got two riders coming in. So between all of us, we'd do five or six lots each.”

This year's WC Equine Guineas draft kicks off with Lot 146, a first-crop daughter of Sioux Nation. By a sire quick off the mark with his runners, she is a half-sister to four winners and out of Luxie (Ire) (Acclamation {GB}), a half-sister to the fast Listed winner Mister Manannan (Ire) (Desert Style {Ire}).

A real feather in the cap of their draft is the presence of a Zarak (Fr) filly. Catalogued as Lot 198, she is the only filly to be catalogued to the sale by her sire, one of the most exciting young stallions in Europe, and is a granddaughter of G2 May Hill S. winner Nasheej (Swain {Ire}).

She is followed immediately into the ring by a Starspangledbanner (Aus) colt (Lot 199), who is a half-brother to three winners and a member of the Doff The Derby (Master Derby) dynasty.

The draft is rounded out by a colt from the second crop of Caravaggio (Lot 227), who is closely related to G1-winning sprinter The Right Man (GB) (Lope De Vega {Ire}), and a colt from the first crop of Cracksman (GB) (Lot 313), who is a half-brother to Listed winner Panstarr (GB) (Pivotal {GB}).

“We started with seven this season but that's down to five, which isn't bad although we'd like to have more,” says Clark.

“It keeps us really busy. If you start expanding, what you do can be diluted and we're very hands-on, and we want to keep enjoying it. Yes we'd like to expand more but definitely not over the 50 mark overall. We're lucky to have a fantastic client base, they're very good to us and have been very supportive.”

Whitaker concurs. “We'd be comfortable if the breeze-up side keeps expanding,” she says. “We've gone from two to five. It's a big jump for us but still not as many we'd like.”

She adds: “I think we have a nice bunch. But you've got to be realistic, you've got to know what you're galloping next to. We're riding them and that's an advantage as we know when they feel a bit off and you've got to take a pull, or if they're a bit fresh and you have to give them more. You've got to manage your expectations. Everything will happen on the day and we'll just have to see.”