Home » Archive » Shared News » Was this the Best Juvenile of Breeders' Cup Weekend?

Was this the Best Juvenile of Breeders' Cup Weekend? 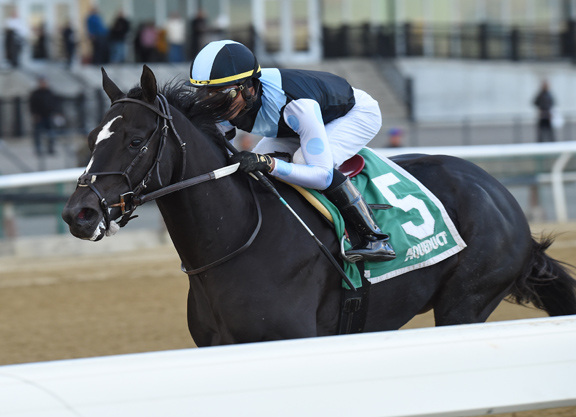 Though a constellation of three unbeaten 2-year-olds did emerge glittering from the Breeders' Cup, the GI Juvenile itself appeared only to send meteors careering out of their projected orbit.

Obviously there's plenty of time for these burnouts to renew their lustre next year. Dennis' Moment (Tiznow) didn't have a prayer after genuflecting as he exited the gate; while Eight Rings (Empire Maker) must be a city block better than he ran, for his trainer to have encouraged clients as important as Coolmore to invest in breeding rights in the days before the race. And Maxfield (Street Sense), of course, didn't even show up.

For now, however, those seeking to identify the pick of the crop will perhaps navigate their course not from Storm the Court (Court Vision), who picked up the pieces in the Juvenile, but from a star that appeared that same weekend on the opposite coast. Because Independence Hall (Constitution), with that white sickle gleaming from his dark forehead, arguably harvested more compliments in the GIII Nashua S. at Aqueduct than did Structor (Palace Malice), British Idiom (Flashback) and Four Wheel Drive (American Pharoah) in collectively preserving their three-for-three records at Santa Anita.

Even though he was still goofy in the stretch–understandably enough, with just an easy Parx maiden win under his belt–it was certainly a performance of clarity and emphasis to contrast with the stage fright of Eight Rings and company. In beating a solid field by a dozen lengths, Independence Hall became the first juvenile to clock a triple-digit Beyer this year and startled even his trainer Mike Trombetta, who had instead intended to run him in a Laurel allowance until it was abandoned on account of a burst water pipe.

While the door remains temptingly ajar to the divisional championship, connections are now taking the long view and have sagely decided to give this April 17 colt more time to absorb that huge effort. But if the GII Remsen S. is no longer on the agenda for Independence Hall, the guys at WinStar are hoping that their breakout rookie Constitution is still in the game in terms of the year's top juvenile colt. Because he is also sire of GI Champagne S. winner Tiz The Law, who is set to undertake a Churchill reconnaissance in the GII Kentucky Jockey Club S.

Constitution's fee for next spring has already been elevated to $40,000 from $15,000. Having made the customary descent from 172 mares in his first book–exceeded, among his intake, only by American Pharoah, Wicked Strong and Tapiture–to half that number this spring, Constitution has maximized his opportunities in remarkable fashion. His good ones, at any rate, seem to be very good, with all four of his black-type winners scoring at graded stakes level.

Constitution's flying start has been well chronicled, including by colleague Sid Fernando in these pages, but it's worth adding one extra credit. And that's his timing. Because WinStar were sorely in need of succour after the tragic loss of Pioneerof the Nile, the one stallion in the top echelon of their roster who still seemed to have a long career ahead of him. With so many of their other elite sires getting on in years, Constitution represents a heartening symbol of a new cycle underway; not least, of course, with so many other youngsters eligible to follow his example.

The status as Tapit's premier heir is a hotly contested one. Constitution's own intake alone features Tapiture, Tonalist and Race Day, while the previous one included Flashback, who recently moved to Pennsylvania but has now pulled British Idiom out of his hat; while they will now all have the likes of Frosted breathing down their necks. But Constitution is certainly elbowing his way toward the front of the line.

His track career comprised just eight starts, spread over three phases: an unbeaten sophomore overture at Gulfstream, through maiden, allowance and GI Florida Derby company; a resumption late in the year, building toward success in the GI Donn H.; and an unavailing attempt to retrieve his best in two starts after another layoff.

But then Tapit has hardly been held back by an even lighter career, and Constitution is entitled to process a latent toughness in his pedigree. His third dam Horns Gray won a dozen of her 52 starts, as befits the product of a sire-line as notable for durability as its recurring shades of gray. Her sire Pass the Tab had three gray grandparents including The Axe, who held his form through four seasons on both sides of the ocean. And you'll also find The Axe as sire of Tapit's very influential (and gray) fourth dam Foggy Note, the mother of Relaunch.

Horns Gray's daughter by Distorted Humor was an unbeaten Grade I winner at two, Awesome Humor, and that doubtless accounted for the choice of the same stallion for her daughter Surf Club (who was by Storm Bird's son Ocean Crest, a name that ended up meaning little outside Turkey). The result was Constitution's dam Baffled, a Royal Ascot-placed juvenile who has since also produced GIII winner Jacaranda (Congrats) and G2 winner Boynton (More Than Ready).

Independence Hall's own granddam is likewise by a son of Storm Bird–though one infinitely superior to Ocean Crest, in Storm Cat. Her name was Desert Stormette, and she was a full-sister to Desert Stormer, who surprised Mr. Greeley and Lit De Justice in the 1995 GI Breeders' Cup Sprint.

The merit of their genes is reflected in Desert Stormer's useful record as a producer, highlighted by Grade II winner Sahara Gold (Seeking the Gold), herself dam of a very smart runner in Better Lucky (Ghostzapper)–a dual Grade I winner on turf but just as good on dirt, beaten just a head in the GI Breeders' Cup Filly & Mare Sprint.

Sahara Gold's full-sister Ensenada, meanwhile, became the dam of dual Grade II winner Casino Host (Dynaformer). With such a record behind her, both on and off the track, it's hard to believe Desert Stormer was twice put through the ring as a 20-year-old. Happily she ended up enjoying retirement in good hands at Dell Ridge, and her example has also had lasting dividends for her sister.

On the same model that produced Sahara Gold and Ensenada, Desert Stormette was sent to Seeking the Gold and came up with a six-for-12 winner named Desert Gold. She in turn produced a very smart filly in Britain named White Moonstone (Dynaformer), an unbeaten Group 1 winner at two (sadly unraced after). Desert Gold also produced a listed winner by Arch, plus the second dam of Homerique (Exchange Rate), who was Classic-placed in Europe before winning the GII New York S. this summer.

Desert Stormette subsequently made two visits to Seeking the Gold's son Cape Town–one of which produced Kalahari Cat, the dam of Independence Hall.

Foaled in 2000, Kalahari Cat did not get onto the track until she was four and then required nine attempts to break her maiden (on the last day of the year, on dirt over six furlongs) before winning two allowance races on turf at a mile. Sold at Keeneland that November for $335,000, she turned a good profit at $600,000 a year later, having meanwhile been favoured with a covering by Ghostzapper.

That was the first of several good opportunities granted to Kalahari Cat, though her stock has largely been more conspicuous for toughness than outright class. Only one of Independence Hall's nine siblings on the track is a black-type winner (on synthetic), but a couple of them have won 15 and 13 races respectively.

As we've seen, however, there's plenty of quality to be dredged from this family. Moreover Desert Stormette was bred from a Damascus mare, and at Windfields, albeit she was never able to race. Actually there are quite a few E.P. Taylor fingerprints in this part of the page, the next dam being bred there on very similar lines to the mother of Desert Stormette's grandsire Storm Bird. (Both were by New Providence: one out of a Chop Chop mare, and the other out of a mare by Chop Chop's son Victoria Park.)

Though it won't now happen in the Remsen, it will be fascinating to see Independence Hall stretch out past a mile. He was comfortable sharing a 22.68 opening quarter in the Nashua, and the best horse in the family made all in a championship sprint. But he's by one Florida Derby winner out of a mare by another (who was out of a Kentucky Oaks winner), so perhaps connections are already dreaming of taking him back to Gulfstream in March–a year after he failed to meet his reserve there, at $200,000, in the Fasig-Tipton 2-year-old sale. (He had been pinhooked as a $100,000 KeeSep yearling.)

But Bob and Kathleen Verratti, Twin Creeks Racing and Eclipse Thoroughbred Partners are sensibly taking it one step at a time for now. Somewhere down the line, perhaps, they should think about experimenting with the turf angles in his pedigree. In the meantime, regardless, kudos goes to Aron Wellman and his Eclipse team, who bought into Independence Hall after his Parx maiden–and already had a weekend to remember through their stake in the aptly named GI Juvenile Fillies Turf winner Sharing (Speightstown).

But if they have both barrels loaded, then so do WinStar with Tiz The Law as well as Independence Hall going out to bat for Constitution. Just when they needed one most, they have a stallion to offer their clients' mares “a more perfect Union.”