Home » Archive » Top News » War of Will Gets the Trip, Redemption in Preakness Win

War of Will Gets the Trip, Redemption in Preakness Win 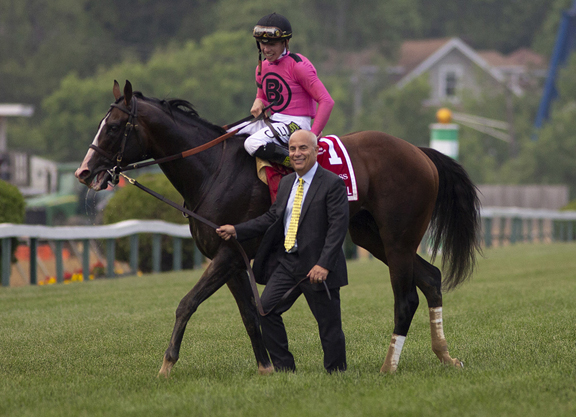 War of Will, Casse and Gaffalione | Horsephotos

BALTIMORE, MD–Two weeks ago at Churchill Downs, Gary Barber's War of Will (War Front) drew the rail and rode that fence all the way into menacing contention on the waning strides of the far turn run. But when jockey Tyler Gaffalione tried to find a seam to let his horse run to GI Kentucky Derby glory, there was none there, as has been rehashed extensively in the time since the race's controversial disqualification. Saturday at Pimlico Race Course in the GI Preakness S., the hulking bay had a nearly identical journey after pulling the one-hole again. The only difference–besides the weather–was the sea parted this time, and War of Will took advantage, running away in the stretch and holding sway late to give sweet redemption to his connections, particularly the 24-year-old Gaffalione, riding in his first Preakness. It was also a first American Classic success for trainer Mark Casse.

“It really hasn't hit me yet,” Gaffalione said in the race's aftermath. “I can't even put it into words. I can't thank my family enough for all the support. He's got so much heart. We always knew he had the ability, we just had to get a little bit lucky and today was our day.”

In front of a crowd of 131,256 that enjoyed perfect conditions with temperatures in the mid-70s and a light breeze, the 144th Preakness got off to an eventful start when longshot Bodexpress (Bodemeister) reared up at the start and lost jockey John Velazquez, who quickly got up and walked off the track. War of Will took a slight stumble a stride out of the gate, but quickly asserted his speed before deferring to let Warrior's Charge (Munnings) go on with it early. Sticking to the fence in the garden spot, a pocketed fourth, behind sharp fractions of :22.50 and :46.16, War of Will was more settled than in the sloppy-track Derby, when he was tossing his head around noticeably.

Inching a bit closer to the front-runner as three-quarters went up in 1:10.56, Gaffalione stayed patient with a handful of horse until giving his colt some light coaxing just inside the five-sixteenths pole. Soon after, Warrior's Charge drifted out one path and Gaffalione seized the opportunity, pushing War of Will through the opening three-sixteenths out. Kicking clear past the eighth pole as Warrior's Charge began to falter, he remained in charge from there and hit the wire a comfortable 1 1/4 lengths to the good. Everfast (Take Charge Indy), the second-longest shot on the board at 29-1, finished with a flourish along that same rail to edge Owendale (Into Mischief) for second money in a head bob, while Warrior's Charge held on for fourth. Race favorite and 'TDN Rising Star' Improbable (City Zip) acted up in the gate and never fired, checking in sixth at 5-2.

“It's sweet,” said Casse. “I've been following horse racing since I was five and the Preakness has always been so big to me. There was so much written, so much said, our horse wasn't going to win [the Derby], and I felt bad for him and felt very bad for Gary Barber. I just wanted a fair shot. I was extremely proud. A lot of people asked, 'Is this revenge?' No. I just wanted to win.”

Barber was in France for the Cannes Film Festival and unable to attend the race, but entrusted Casse with getting War of Will ready off of two weeks' rest after the top four finishers across the wire in the Derby passed on running.

“Anybody that knows me or follows my training knows I'm aggressive and I'm not afraid to take chances,” Casse said. “Personally, I don't think [running in the Preakness after the Derby] is done enough. I think too many times trainers are too worried about their win percentages. We're not afraid to run them.”

In addition to getting through the hole that didn't materialize in the Derby, Gaffalione credited War of Will's ability to remain calm during the race as a determining factor in the Preakness's differing result.

“He relaxed more than usual today. That was the key,” he said. “We warmed him up to do so. Mark said, 'Just jog him today, let him walk, try to keep him as calm as possible' and it worked out. We just followed Warrior's Charge the whole way around there. He came off the fence going into the turn, and I thought about waiting to go outside him, but he kept going out, out, out. So I took my shot and went through there. The horse didn't hesitate and he finished the job.”

War of Will's victory came after two weeks of back-and-forth in the media about the disqualification of Maximum Security (New Year's Day) in the Derby, who at one point tangled legs with the Preakness winner. Some, including Maximum Security's owner Gary West, pinned the blame on War of Will and Gaffalione for the incident, saying he caused the first contact, which Casse admitted didn't sit well with him after he initially was grateful that all the Derby horses came back in one piece.

“Honestly, right after the Derby, it's hard to believe, but I felt joy and relief that he was okay and that we didn't have the worst disaster in horse racing history,” he said. “I was good the next day. It didn't start until about Tuesday, and Tuesday there was a remark that somebody made that it was Tyler's fault. That got me pretty fired up. And then I read where they were blaming War of Will. I then became not quite as nice, and I was irritated. I said other words that I later regretted because they put them in headlines. But I handled it. My mom called me Thursday in tears, and she goes, 'Are you okay? Are you okay?' I said, 'Mom, I'm great, don't worry about me, I can handle this.'”

Gaffalione didn't bite when asked if this win felt particularly redemptive for him after all the discussion of the past two weeks.

“We were just focused on getting the horse to the winner's circle. That's the main thing. And his safety of course,” he said. “But it wasn't anything to do with redemption or trying to prove something. It was just, the horse deserved it. He's a talented horse, and we're just very thankful he was able to prove that today.”

War of Will, a €250,000 purchase as an Arqana May 2-year-old, went winless in his first four starts, but the company he kept showed Casse's confidence. He ran second in the GI Summer S., then fourth in the GIII Dixiana Bourbon S. and fifth in the GI Breeders' Cup Juvenile Turf. Casse and Gaffalione reflected on last summer at Saratoga, when eyes were focused on another Gary Barber runner, the popular Wonder Gadot (Medaglia d'Oro).

“Everybody would come by the barn to see Wonder Gadot. And I would say, 'Do you want to see a really, really good horse?'” Casse said. “And I brought him out and I would show him. That's when we started calling him 'Wow'. A lot of people said, 'Why are you so excited?' And Derby week he breezed, and everybody was like, 'Wow', and I'm like, 'Now you know what I've been seeing.'”

“I'll add more about that,” Gaffalione said. “When Wonder Gadot was going for the Travers, there was talk that I might be able to ride her, and when they made the decision to ride Irad Ortiz, Mark told my agent, 'Don't worry, we have another one just as good.'”

War of Will broke his maiden fifth out in the Churchill slop Nov. 24, then reeled off impressive tallies in the GIII Lecomte S. and GII Risen Star S. before losing his hind action in the opening strides of the GII Lousiana Derby and finishing ninth at 4-5. He battled to deep stretch in the Derby, but faded late to finish eighth, later elevated to seventh with Maximum Security's DQ.

With the first two legs of the Triple Crown now in the rearview, Casse said his intention is to run his colt in the June 8 GI Belmont S. as well.

“You know us, we like to run,” he said. “We'll probably be at Belmont. He'll go back to Keeneland, we'll see how he acts, and if all goes well, we'll probably send him up maybe 10 days before [the] Belmont. But that's a big question. Gary Barber is a very, very hands-on owner, extremely, extremely smart and a very good horse person. So there will be lots of conversations.”

War of Will is the 21st Grade/Group I winner for super-sire War Front and his first in a Triple Crown event. He is the ninth foal to race out of the Sadler's Wells mare Visions of Clarity and a half-brother to Irish highweight and G1SW Pathfork (Distorted Humor)–a stallion in South Africa–as well as the late MSW marathoner Tacticus. Visions of Clarity was a SW in France and is a half-sister to Spinning World (Nureyev), a five-time GISW who captured the GI Breeders' Cup Mile in 1997. She is responsible for a juvenile colt by Tapit who went for $130,000 as a Fasig-Tipton October yearling and sells through Ciaran Dunne's Wavertree Stables Inc., agent, as hip 575 at Fasig-Tipton Midlantic this coming Tuesday (under-tack breeze), and was bred to American Pharoah last spring. Second dam Imperfect Circle is a G1SP half-sister to MG1SW Chimes of Freedom (Private Account), who in turn produced MGISW Aldebaran (Mr. Prospector) and GISW Good Journey (Nureyev), as well as MGISW Denon (Pleasant Colony).