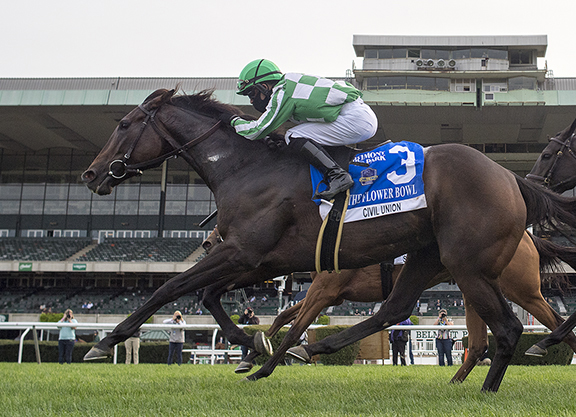 The 3-1 third choice in a field of seven, Joseph Allen's progressive Civil Union (War Front) built on her last-out success in the GII Glens Falls S. at Saratoga with a breakthrough top-level tally in Saturday's GI Flower Bowl S. at Belmont Park, securing a berth in the gate for the GI Maker's Mark Breeders' Cup Filly & Mare Turf in the process.

Allowed to settle last but one beneath Joel Rosario, with only G1 Prix de l'Arc de Triomphe winner Sottsass (Fr) (Siyouni {Fr})'s half-sister, French and American Group 3/Grade III winner My Sister Nat (Fr) (Acclamation {GB}) behind her, Civil Union was content to bide time from a ground-saving position as longshot Lovely Lucky (Lookin At Lucky) set a modest pace in advance of favored Cambier Parc (Medaglia d'Oro). Always traveling sweetly, Civil Union was short of room entering the final 2 1/2 furlongs, but accelerated three off the inside once La Signare (Fr) (Siyouni {Fr}) vacated that spot. With one of the best finishers in the business at the controls, Civil Union came calling for the lead nearing the sixteenth pole and was home first as My Sister Nat attacked the line down the center of the course. Nay Lady Nay (Ire) (No Nay Never), who was relegated to second favoritism in the last few clicks of the tote, could not quite match strides with the top two and settled for third, one spot ahead of a disappointing Cambier Parc.

It was the second Flower Bowl win in the last four years for Allen, trainer Shug McGaughey and War Front, whose daughter War Flag landed the spoils at 9-1 in 2017 before finishing a respectable sixth behind Wuheida (GB) (Dubawi {Ire}) in the Filly & Mare Turf at Del Mar.

“When she started off this winter in Florida, I never imagined that she would be a Grade 1 winner,” the Hall of Fame conditioner admitted. “She's progressed the right way. It's fun. She's a nice mare to train and nice to be around. She ran under some different tactics today on Joel [Rosario's] part, but that's why he's such a great rider. He knows what to do.”

A debut winner from three starts for the Chad Brown barn in 2018 and 2019, Civil Union took a course-and-distance allowance in her second appearance for this barn ahead of a facile score in the 12-furlong River Memories S. July 12. With Rosario in the irons for the first time in the Sept. 5 Glens Falls, Civil Union sat handy to a walking pace, then covered her final three furlongs in a smart :34.97 to best My Sister Nat by a length.

Civil Union becomes the 23rd Grade I/Group 1 winner for her Claiborne-based stallion and is the 25th top-level scorer out of a daughter of the late Unbridled's Song, three of which–Contrail (Jpn) and Volatile–have come this season.

A full-sister to the 2-year-old colt Battle of Britain, Civil Union has a weanling full-brother named Operation Torch. Having produced her first eight foals by War Front, Photograph was most recently bred to Tapit.