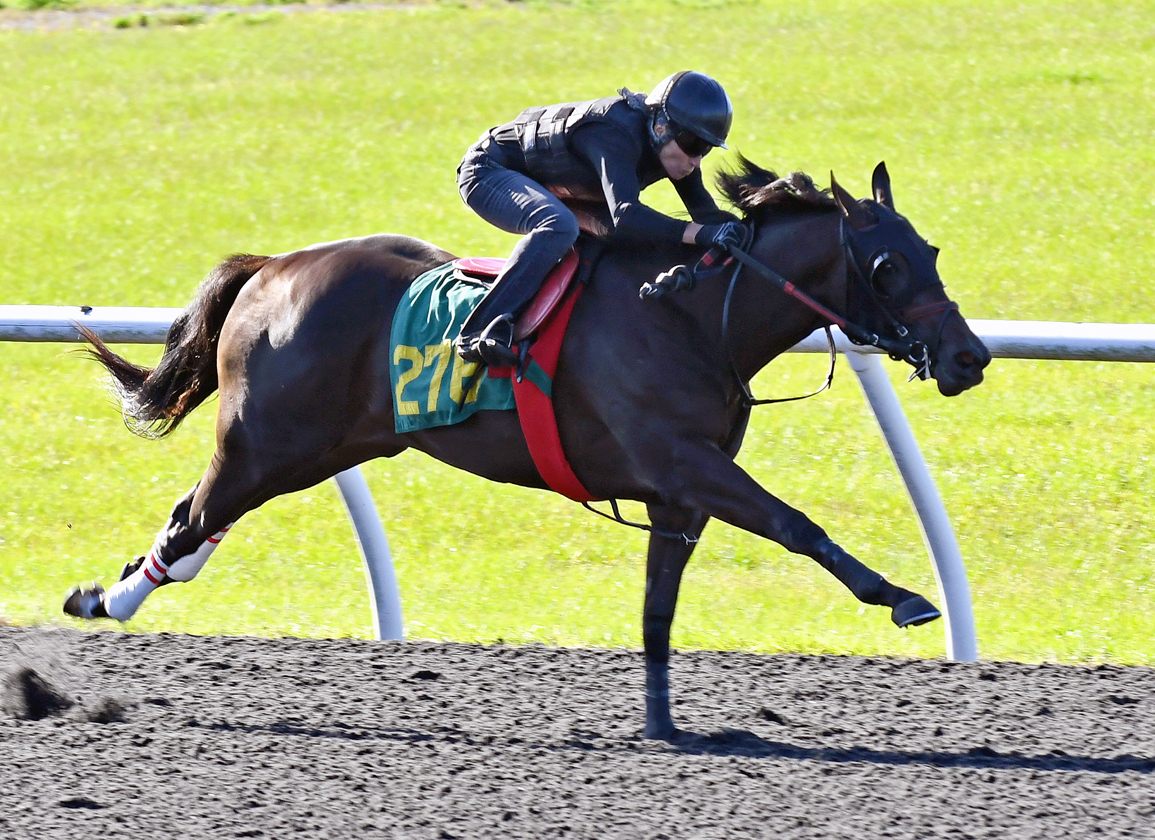 A filly by War Front (hip 276) zipped a quarter-mile in a bullet :20 1/5, while a daughter of Street Boss (hip 346) claimed the fastest furlong work of :9 3/5 during the second session of the under-tack show for next week's Ocala Breeders' Sales Company's Spring Sale of 2-Year-Olds in Training Monday in Central Florida.

Hip 276 is consigned by Eddie Woods on behalf of her breeder, Oussama Aboughazale's International Equities Holding.

“We were expecting her to be quick, but we didn't know she was that quick,” International Equities Holding's bloodstock manager Frances Relihan said with a laugh Monday afternoon.

The filly is out of Cinnamon Spice (Candy Ride {Arg}), a half-sister to Grade I winner Violence (Medaglia d'Oro) and from the family of champion Sky Beauty. Aboughazale purchased the mare for $700,000 at the 2017 Fasig-Tipton February sale.

“We bought the mare as a maiden and paid quite a bit for her at the time,” Relihan recalled. “She's a beautiful-looking mare and her first foal was a little premature, a Medaglia d'Oro filly that we ended up keeping and she went down to Chile to the breeding program down there. And then she had a Pioneerof the Nile filly that Bobby Flay bought [for $250,000 at the 2020 Keeneland September sale]. She's quite a nice filly, but hasn't started yet.”

“We were trying to capitalize on the market a little bit,” Relihan said. “She was bringing good money, but we kind of got cold feet and decided to bring her home.”

Hip 276 is not the first International Equities Holding-bred filly to record a snappy :20 1/5 work at OBS. The operation sold a yearling by Not This Time out of Sheza Smoke Show (Wilko) for $135,000 at the 2019 Keeneland September sale and the filly returned with a :20 1/5 work before selling to Zedan Racing Stables for $1.35 million at the 2020 OBS Spring sale. Named Princess Noor, she won that year's GI Del Mar Debutante. In foal to Into Mischief, she sold for $2.9 million at last year's Fasig-Tipton November sale.

Results like that led to a modification in Aboughazale's commercial breeding operation which had traditionally offered most of its crop as yearlings.

“The farm is still very much in its infancy with just five years under our belt,” Relihan said. “I won't say we are changing the program, but we are always modifying and trying to see where horses will fit better. If horses aren't ready for the yearling sales, then I think it's great to have that, not as a backup because they RNA'd or something, but to have the objective to take them to the 2-year-old sales.

She continued, “We've seen in the past how you can sell a horse at the yearling sales who might not be mature enough and they might need a little extra time. And then they come into their own and they breeze fast. With Princess Noor, for example, you sell a $135,000 yearling before Not This Time hits and then you see what she breezes in and she sells for $1.3 million.”

The War Front filly is one of seven juveniles bred by International Equities Holding who will be offered at auction this spring.

“She was very beautiful, well-proportioned, and very sharp, but she just needed to grow up a little bit,” Relihan said of the decision to keep the filly out of the yearling sales. “We felt if we put her in September, she would be undervalued. So we put her out for the summer, gave her a chance to grow up and then when Eddie was in town in September, we said, 'Come on out and take a look at her.' We thought we would put her in his program and see what she could do. I was down at the March sale last month with Mr. Aboughazale and we went to the farm to see her and she's one of those fillies that just improves, improves, improves. She loves her work and she's very sharp mentally. She's an exciting filly.”

Cinnamon Spice recently produced a Constitution filly and will be bred back to City of Light this year.

A filly by Street Boss (hip 346) claimed the fastest furlong work of the under-tack show so far when she covered the distance in :9 3/5 Monday. The chestnut is out of Dazzle (Twirling Candy), a full-sister to multiple graded placed Exaulted, and is consigned by David McKathan and Jody Mihalic's Grassroots Training and Sales. Grassroots purchased the filly for $22,000 at last year's Keeneland September sale.

The under-tack show continues through Saturday with sessions beginning daily at 8 a.m. The Spring sale will begin next Tuesday and continue through Friday with bidding commencing each day at 10:30 a.m.