Ask Roderick Wachman about his accomplishments in the bloodstock industry and he’s likely to give much of the credit to good fortune. Whether he’s actually been lucky, good, or both, the Kentucky-based horseman could be poised for more success at the upcoming Keeneland November Breeding Stock Sale through his Kingswood Farm consignment.

Acting on behalf of himself and partners, Wachman acquired then 4-year-old filly Nile Queen (Pioneerof the Nile–Dawn Raid, by Vindication) at KEENOV 12 months ago for $95,000. Her brother, that term’s GII Saratoga Special S. winner Exaggerator (Curlin), had just days before finished fourth behind Nyquist (Uncle Mo) and stablemate Swipe (Birdstone) in the GI Breeders’ Cup Juvenile in Lexington.

“At the time I bought her, I knew that Exaggerator was a good horse–he had won the Saratoga Special, but what really caught my eye was the fact that Kent [Desormeaux] had ridden him, not Swipe in the Breeders’ Cup [for brother Keith Desormeaux],” explained Wachman. “Obviously, Swipe finished second, but my view was that Kent had thought that Exaggerator was a better horse since he would have had the choice of the two of them. Plus I liked the mare as a physical–I thought she was a very nice-looking mare. She was a big, scopey, quality mare.”

While Swipe failed to build off a promising 2-year-old campaign in 2016, Exaggerator, of course, blossomed. He romped by 6 1/4 lengths in the GI Santa Anita Derby, and was a fast-finishing second in the GI Kentucky Derby before spoiling a Triple Crown bid in the GI Preakness S. and later adding a GI Haskell Invitational S. victory to his CV.

Now in foal to Bernardini, Nile Queen will return to the Keeneland sales ring Tuesday, Nov. 8 as hip 24.

While Wachman said he obviously enjoyed watching and rooting for Exaggerator this year, he wasn’t necessarily pulling for him in the Derby despite having his half-sister.

“I do a little bit of work for Paul Reddam, so I was actually roaring for Nyquist down the stretch at Churchill,” Wachman revealed. “I was a guest of his at the Derby. I would have been rooting for him regardless because I enjoy [Reddam’s] success.”

Speaking of Nyquist, Kingswood will also offer a weanling filly (hip 161) by Uncle Mo bred by Dennis O’Neill, who picked out the champion and GI Breeders’ Cup Classic contender as a 2-year-old. The Feb. 12 foal is out of stakes winner Crozet (Charismatic), a half to GSW Lindsay Jean (Saint Ballado) from the extended female family of Storm Bird.

“She’s an attractive, good-looking, quality filly,” Wachman said of the weanling. “Obviously, Dennis was all about Uncle Mo last year and he bought a couple of mares in foal to him to try and ride the wave.”

Kingswood’s third Keeneland offering is the unraced Juddmonte-bred 4-year-old Glorification (GB) (Champs Elysees {GB}) (hip 206). Wachman picked her up for 50,000gns at the 2015 Tattersalls December sale and put her in foal to More Than Ready.

“I thought she was a very attractive mare–she was being sold by Juddmonte, and they can be very hard to buy from; everybody wants a piece of their blood,” Wachman offered. “It was a very deep family, and I bred her to More Than Ready, who I regard as an international sire–he works everywhere. He’s one of the true international stallions, and she should have broad appeal, I would hope.”

Out of GSP Light Ballet (Sadler’s Wells), Glorification could get a further bump at the Breeders’ Cup, as her deep pedigree includes the likes of expected GI Breeders’ Cup Turf favorite Flintshire (GB) (Dansili {GB}).

Born and raised in Ireland, Watchman hails from a family of horsemen. His brother is top European-based trainer David Wachman. 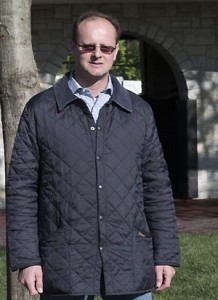 “Like everybody else, I got the virus at a very young age,” he recalled. “And I call it a virus because, once you have it, it’s full time–it’s hard to shake.”

After school, Wachman worked at Cheveley Park Stud in Newmarket before spending time in Australia and New Zealand. He came to Kentucky in 1994, learning from Fred Seitz of Brookdale Farm and John Stuart at Bluegrass Thoroughbred Services before founding Kingswood Farm in Lexington in 2001. He shifted his focus toward bloodstock services in 2014.

Wachman has been active in the Australian market in recent years, and purchased an A$230,000 Medaglia d’Oro weanling colt on behalf of a client in 2015 who was resold at April’s Inglis Easter Yearling Sale for A$875,000. Wachman has an interest in six more horses who will sell Down Under as yearlings next year, and credits the prevalence of ownership syndicates for a particularly strong middle market in Australia.

As for market expectations at the upcoming breeding stock sales in Kentucky, Wachman said, “If you have everything they want, you get regally rewarded. If you miss in any way, it’s a big step down to the next level. If you miss on a couple of points, it’s like standing at the top of the stairs and tripping. That’s just the nature of our market now–it’s a very educated market. There’s a huge amount of information on hand; everyone has an iPhone or an iPad and they can look at statistics and percentages. But what they can’t look up is luck, and that’s the biggest factor in this business.”