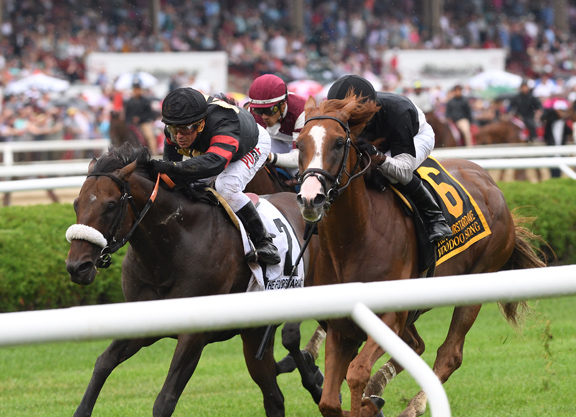 Barry K. Schwartz’s Voodoo Song (English Channel) rode his affinity for Saratoga’s turf course to a Grade I victory last summer, but finished off the board in his next two starts and hasn’t been seen in over nine months. He hopes for home-field advantage to aid him when he returns Friday as the narrow morning-line favorite in a deep renewal of GIII Forbidden Apple S., newly graded and run at Saratoga for the first time this year.

Making his Spa debut and initial start for Linda Rice two summers ago, the chestnut romped in a $40,000 claimer and remarkably won three more times at the same meet, culminating in a conquest of the GIII Saranac S. Scoring just once in his next five starts, he got back on the board with a victory in this event last July at Belmont and repeated with a gritty triumph in the course-and-distance GI Fourstardave S. He followed that up, however, with a no-excuse fifth at 3-5 in the GII Bernard Baruch S., his first defeat at Saratoga, and a 12th-place effort after dueling on a fast pace in the GI Shadwell Turf Mile S. Returning with a steady series of turf breezes at Belmont, capped by a five-furlong spin in 1:00 4/5 (2/4) July 7, he will likely have to deal with speedy ‘TDN Rising Star’ Gidu (Ire) (Frankel {GB}) on the front end.

Victorious over Voodoo’s Song when pulling at 13-1 upset in the Baruch last summer, Shadwell Stable’s Qurbaan (Speightstown) has been consistently knocking on the door but unable to break through since. Third in the Shadwell Mile, he was runner-up to GISW Glorious Empire (Ire) (Holy Roman Emperor {Ire}) in the GII Fort Lauderdale S. before filling the trifecta in the GIII Tampa Bay S. and GI Maker’s 46 Mile S.

Beaten just a half-length when second to division leader Bricks and Mortar (Giant’s Causeway) in the Old Forester Turf Classic S. May 4 at Churchill, he produced his first off-the-board finish in America when finishing eighth stretching out to 1 1/4 miles in the GI Manhattan S. June 8 at Belmont. The 6-year-old chestnut removes blinkers after wearing them in his last two and switches to Joel Rosario for the first time.

Three Chimneys Farm’s Made You Look (More Than Ready) intrigues in his 5-year-old debut. Victor of the GIII Dania Beach S. as a sophomore for Todd Pletcher, the dark bay went winless in his next four starts and was transferred to Chad Brown’s barn. Returning off a 10-plus month layoff last May at Belmont, he bested MGSW Inspector Lynley (Lemon Drop Kid) in a Belmont optional claimer and then was a strong second to Oscar Performance (Kitten’s Joy) in his world-record equaling GIII Poker S. triumph. No match for Voodoo Song when last seen running fourth in the Fourstardave, he returns with a sharp series of local breezes, highlighted by a half-mile move in :48 1/5 (3/90) over the Oklahoma dirt June 22.

Doctor Mounty (Street Sense) and Hembree (Proud Citizen) rate upset chances if a contested pace materializes. The former rallied from last to first to score in the GIII Tropical Turf S. Jan. 12 at Gulfstream and again came from last to be third in the slow-paced GIII Appleton S. Mar. 29. Off the board in the Maker’s 46 Mile and GIII Fort Marcy S., he got back on track with a sharp victory in the Prince George’s County S. June 16 at Laurel. Hembree, a $50,000 claim last spring by Mike Maker, boasts victories in the GII Nearctic S. and El Prado S. and flew late to just miss by a nose when second in the Poker last out June 16 at Belmont.