Volatile Settling in at Three Chimneys 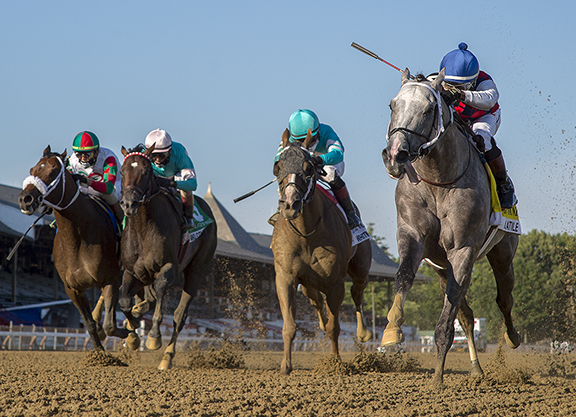 Two years ago, dual Eclipse Champion Gun Runner (Candy Ride {Arg}) joined the Three Chimneys' stallion program after collecting six Grade I wins for the farm and partner Winchell Thoroughbreds. This year another Three Chimneys-owned racehorse in Volatile, a son of Violence campaigned by Three Chimneys and Phoenix Thoroughbred III, has been added to the roster for 2021 and will stand for an initial fee of $17,500.

Before even stepping on a racetrack, the imposing gray was one to watch.

His stakes-winning dam Melody Lady (Unbridled's Song) was out of the dual Grade I winner Lady Tak (Mutakdim) and when he was a yearling, his full sister Buy Sell Hold became the first winner for their sire and then two week's later, Violence's first stakes winner in the Kentucky Juvenile S.

The young colt caught buyers' attention a few months later at the Keeneland September Sale, including no less of a judge than Kerri Radcliffe.

The agent was on the lookout for a racehorse for the Three Chimneys-Phoenix Thoroughbred partnership, and the son of Violence checked all the right boxes.

“He was a really good-looking horse with plenty of scope and length,” Three Chimneys' Tom Hamm recalled. “One of his great attributes that the team really liked was the way he moved. He was very impressive and athletic-looking. He had a lot of power and leverage behind.”

The partnership went to $850,000 to purchase the youngster, making him the highest-priced yearling by Violence to date.

A case of mild tendonitis kept Volatile from the starting gate as a juvenile, but trainer Steve Asmussen knew he was just biding his time with the colt.

“Once Steve got his hands on him he realized that he was really fast, so he just wanted to be patient and take his time,” Hamm said.

Volatile made his debut in the summer of his sophomore season at Ellis Park, defeating maiden rivals at six furlongs. He came up 1 1/4-lengths short in his next start, but bounced back with a three-length win last November at Churchill Downs going six furlongs.

“Even with a bit of a troubled trip, he ran some impressive numbers and an impressive time,” Hamm said of the 1:09:10 finish. “That was kind of the beginning of his breakout.”

Volatile made easy work of his 4-year-old debut the next spring at Oaklawn Park, winning by an eye-catching 7 ½ lengths.

Stepping up to stakes company in his next start, he showed the same brilliance in winning the Aristides S. The 8 length-victor stopped the clock at 1:07.57- just .02 seconds short of the track record.

“Volatile's win in the Aristides was a very visually-impressive race,” Hamm said. “His 112 Beyer was the highest in 2020 for any horse at any distance on any surface. If you watched the race, it was one of the most impressive things because he was actually geared down on the stretch. I think he proved in that race that he was a very special horse.”

Sent off as the favorite next out in the GI Alfred G. Vanderbilt H., Volatile broke first under Ricardo Santana Jr. and never looked back as he defeated a field of all Grade I winners and ran a :22.94 final quarter.

“Winning the Vanderbilt just verified what we already believed–that he could compete at the Grade I level,” Hamm said. “His performance in that race, coupled with the performance in the Aristides solidified him as one of the most talented horses out there in 2020.”

The four-year-old was set for his next start in the GII Vosburgh S. when, days before the race, he was injured with a hairline fracture to his right front cannon bone.

“Volatile was training excellent leading up to the Vosburgh,” Hamm said. “We were going to use that race as a prep for the Breeders' Cup, and then unfortunately he came up with an injury. He had already done enough at that point, and we thought it was time to bring him to the farm and get him ready for his stallion career.”

Hamm said that while Volatile excelled as a sprinter, he believes the colt would have been dangerous stretching out as well.

“Volatile was obviously very fast and a good sprinter, but honestly, he's built like a miler. He's got a lot of stretch and length to him. Actually Steve thought he could be a good one-turn mile horse, but when the Aristides was right in front of us and he was running so well, there was really no reason to change at that point and unfortunately we didn't get the chance down the road, but we think he could have been a good miler as well.”

“He's been overwhelmingly popular with the breeders,” Hamm continued. “We think he's got that wow factor and that he's going to do really well.”