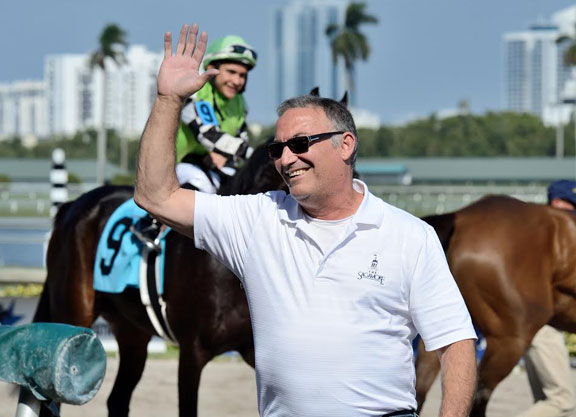 Marcus Vitali, a Thoroughbred trainer with a lengthy history of medication violations who is currently serving a one-year suspension for interfering with and impeding a 2019 drug investigation at Delaware Park, is attempting to shift his focus to a new business venture in Massachusetts: legal marijuana cultivation.

But even before Vitali can take the first municipal step in a state that has one of the most stringent licensure processes in the nation for recreational marijuana cultivation, his litany of racing violations is drawing scrutiny in the local press.

According to a Tuesday story in the Attleboro Sun Chronicle under the headline “Horse trainer with tainted past wants to open Attleboro pot farm,” the 59-year-old Vitali is seeking to open a marijuana growing facility in a 2,000-square-foot former factory building down the street from a used car lot that he owns, with a special permit hearing scheduled for Feb. 20 before the city's zoning board of appeals.

The article by George W. Rhodes cited Vitali's decades-long list of run-ins with regulators in the Thoroughbred industry. When asked for his side of the story, the reporter wrote that “Vitali shrugs off the violations, which he blames on a regulation-heavy industry, and contends they should not affect his applications to the city or state” for a marijuana business.

“They are not legal offenses,” Vitali added, suggesting that his infractions and penalties are only relevant within the racing industry.
“I'm getting ready to retire and need something to do to keep busy,” Vitali told the Sun Chronicle.

Last July, when a member of Delaware Park's track security was checking the stable-area dorm of one of Vitali's employees, Vitali allegedly ran into the room, grabbed a bubble-wrapped package out of the refrigerator that appeared to be a vial of clear liquid, and ran off with it.

The package was suspected to be a contraband equine drug, but Vitali allegedly disposed of it before security officials could take possession of it. Vitali later claimed that it was a bag of marijuana.

Twice during 2016, when TDN spoke to Vitali to get his side of the story, he referred to his multiple problems with regulators as “a big misunderstanding.”

Vitali, who began training horses in 1989, has not started a Thoroughbred since July 21, 2019, at Gulfstream Park.