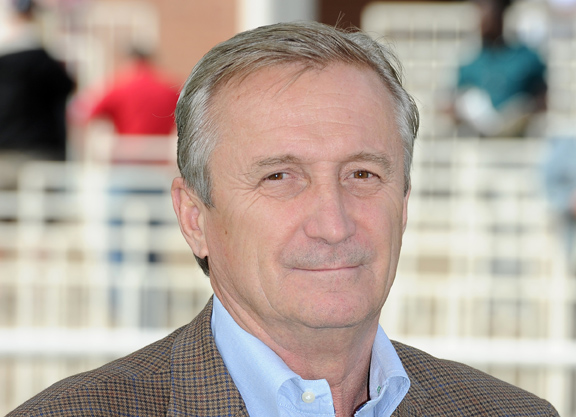 Trainer Rick Violette, Jr. has plenty of firepower in his barn as the Belmont Stakes Racing Festival kicks off Thursday. The veteran horseman has unveiled a pair of promising juveniles at the current stand, and also has two former Triple Crown trail contenders who could make an impact on the undercard Saturday.

Violette purchased only two juveniles at the sales this year–both for longtime client Ralph M. Evans–but they were the right two.

Olive Branch (Speightstown), out of a full to Grade II winner Wilburn (Bernardini) and half to Grade II-winning juvenile Beethoven (Sky Mesa), was scooped up by Violette for $185,000 at OBS March after a :10 1/5 breeze. Let go at 4-1 May 18, she drafted professionally behind a pair of rivals and pounced in the lane to graduate by two lengths (video).

Olive Branch’s workmate Random Walk (Super Saver), a :20 3/5 breezer at the same sale who cost $300,000, sped right to the front and never looked back in his June 3 unveiling, cruising home a 5 3/4-length victor, earning ‘TDN Rising Star’ status and a 90 Beyer Speed Figure (video). The strapping bay is out of a stakes-winning sibling to graded stakes-winning juveniles Lunarpal (Successful Appeal) and Astrology (A.P. Indy).

“Physically, I hate to use the expression ‘checked all the boxes,’ but they did,” Violette said of what he liked about Olive Branch and Random Walk at the sale. “Great hip and shoulder, quite correct. They were good movers, both seemed to have a head on their shoulders. They galloped out well–there was a lot to like about both of them.”

While Olive Branch hadn’t quite garnered quite the same hype before or after her debut as Random Walk, Violette revealed, “She had actually been outworking Random Walk. They did stay together, but she just seemed to do things a little easier. She was just so professional in the morning–took dirt, split horses, so I really did expect her to run pretty well.”

Olive Branch gets her next test Thursday in the 5 1/2-furlong $200,000 Astoria S., where she’ll face a diverse cast of eight rivals that includes shippers from Laurel, Keeneland, Churchill and Gulfstream.

“We’ll find out,” Violette said Wednesday morning from the Belmont apron when asked how he thought his charge stacked up with the competition. “I don’t know how to extrapolate 4 1/2-furlong races to going farther at different racetracks. You don’t even get speed figures from the Keeneland 4 1/2, so we’ll find out. The proof will be in the running.”

Random Walk has exited his race in good order, and will most likely resurface in Saratoga.

“In his last two breezes, he kind of stepped up and improved a lot,” the trainer noted. “[Adding] blinkers certainly didn’t hurt. They helped him focus a little bit more than he had been. But, I was a little reserved, because the filly–at least in the morning–had done things easier. I liked him, but the performance we got out of him was pretty special.”

Violette had another nice juvenile two years ago for Evans in the form of Saturday’s GI Metropolitan H. contender Upstart (Flatter). A stakes winner at two against fellow New York-breds going six panels, the dark bay was second in the GI Champagne S. over track and trip that October before finishing third in the GI Breeders’ Cup Juvenile the following month.

A romping winner of the GII Holy Bull S. the following January, he was taken down in a controversial decision in the GII Fountain of Youth S. before completing the exacta in the GI Florida Derby. WinStar Farm acquired a piece in Upstart from Evans after that, and he would go on to finish third behind American Pharoah (Pioneerof the Nile) in the GI Haskell Invitational S. two starts later after failing to fire in the GI Kentucky Derby.

“I’m putting blinkers on for the first time, and I think that’ll help him get better position in the race than he has been getting,” Violette said. “It just leaves you with too much to do, especially if there isn’t a whole lot of pace… He’s run well over this racetrack, he’s doing great. It’s a wide-open race, as is kind of indicated by the size of the field. There are a lot of people taking shots.”

Retired Wall Streeter Evans, who resides in Connecticut, has been a client of Violette’s since the 90s.

“They don’t come any better [than Evans as an owner].” offered Violette, who serves as the New York Thoroughbred Horsemen’s Association president. “He’s incredibly loyal, good times and bad times. It’s more than an owner/trainer relationship. We’re quite good friends. He’s been a mentor to me at times, as far as business is concerned. Like I said, they just don’t come any better.”

Violette also runs another accomplished New York-bred in Samraat (Noble Causeway) Saturday. A homebred for Len Riggio’s My Meadowview Stable, the MGSW will stretch back out to 12 furlongs in the GII Brooklyn Invitational for the first time since finishing sixth in Tonalist (Tapit)’s GI Belmont S. here two years ago.

Making just one start last year at four, Samraat was third in a Big A optional claimer over a flat mile Apr. 8, and second to Met Mile entrant Anchor Down (Tapit) in the muddy GIII Westchester S. over that same distance here May 7.

“He’s doing fabulously,” Violette beamed. “I’m dying to run him. He ran well in the Belmont despite kind of an awkward trip. He only got beaten four lengths there, so I think the 1 1/2 miles is in his wheelhouse. He looks great and he’s training great.” –@BDiDonatoTDN