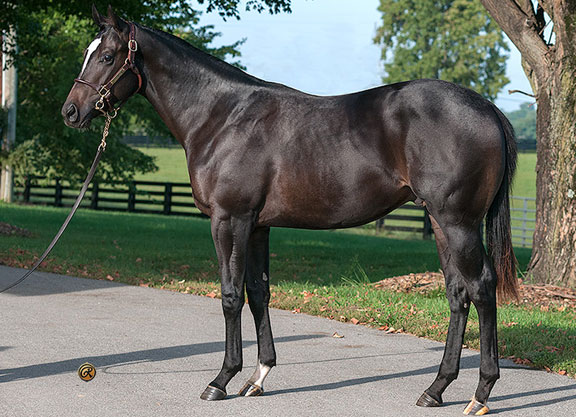 The Ocala Breeders' Sales Company had heretofore staged its major annual yearling sale during the month of August, surrounded on one side by Fasig-Tipton's selected New York-bred yearling sales and by the massive Keeneland September sale on the other. Owing to construction and upgrades of the sales pavilion at the OBS complex, officials canceled their 2016 October sale of mixed stock and staged a successful January sale combining those two breeding stock sales. For the first time Tuesday, OBS hosted an October yearling sale, topped by lot 126, a Kaizen Sales-consigned colt from the second crop of Violence, who was purchased by John Oxley for $275,000.

“It was good,” said Tod Wojciechowski, director of sales for OBS. “[We saw] a lot of what we've seen throughout the year. There was a lot of competition at the upper end of the market. All in all, we feel the move on the calendar was beneficial and there were a lot of buyers here that we may not have seen in the past. I think there were some horses today that certainly benefitted from a little more time and being in a select sale where they can be showcased, I think that was beneficial, too.”

Following on the successes of this year's previous yearling sales, both major and regional, the returns were strong at OBS, as the company reported sales on 107 horses for gross receipts of $4,841,400 for an average of $45,247 and a median of $32,000. Those figures represented gains of 20.2% and 28%, respectively, over the figures recorded during the opening select portion of last year's August sale.

Richard Kent's Kaizen Sales sold the day's top offering a little past the midway point of a fast-moving session. Hip 126 was bred by Lantern Hill Farm's Suzi Shoemaker from Frank's Hope (Pulpit), a daughter of Silver Maiden (Silver Buck), who raided from Chicago to take the 1997 GI Frizette S. Shoemaker had a long-standing business relationship with Silver Maiden's owner and breeder Frank Calabrese, having raised the likes of champion Dreaming of Anna (Rahy) and her talented full-brother Lewis Michael.

“I used to board Silver Maiden and really loved her and respected her and when her daughter was available for private purchase, I bought her,” said Shoemaker. “I knew the family and really respected it.

Shoemaker said the mating of Frank's Hope to Violence was a natural.

“That's such a good cross, the Medaglia d'Oro/El Prado (Ire) over Pulpit,” she said. “I had recommended that for a couple of clients. It's obvious that Violence is a commercial stallion.”

And the outcome was well-received Tuesday.

“He's beautiful–of course, everyone says their horse is beautiful–but he needed a little time,” Shoemaker admitted. “He was maybe a little too feminine to be in September, I thought, and of course there were a lot of Violence colts in Kentucky [at Keeneland September]. So I wanted to give him a little more time. I was thrilled that OBS moved the sale to this particular time of the year because I thought it suited him very well and that's why we brought him here. He's correct, clean X-rays and he's a really nice colt.”

Noted 2-year-old reseller Nick de Meric snapped up the next two priciest offerings on the afternoon, including the session's top filly. Consigned by Stuart Morris, agent, hip 121 was bred in Kentucky by Dr. & Mrs E. C. Hart and was another popular yearling by Three Chimneys' Will Take Charge out of Final Heiress (Forest Wilcat), a full-sister to the late GISW and successful Florida stallion Wildcat Heir and MGSW Forest Heiress, whose offspring included GSP Crossbow (Bernardini) and SP Forest Prince (Mineshaft).

The OBS October Sale concludes Wednesday with a session of open yearlings beginning at 9 a.m. For full results, visit www.obssales.com.