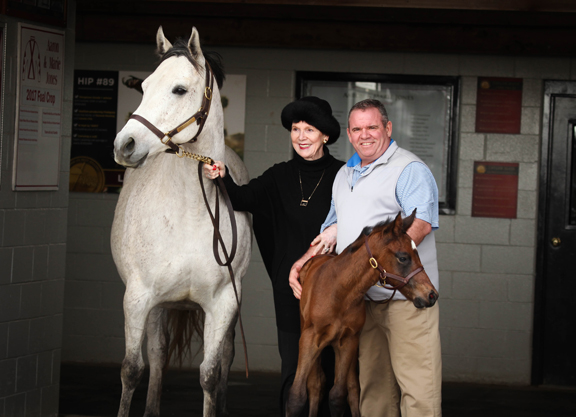 A colt by Violence (hip 641) became the seventh horse of the week to work in under :10 seconds when he secured the furlong bullet time of :9 4/5 during Thursday's fourth session of the under-tack show ahead of next week's Ocala Breeders' Sales Company's Spring Sale of 2-Year-Olds in Training. The bay colt is consigned to the Spring sale by Raul Reyes's King's Equine as agent for his breeder, Aaron and Marie Jones LLC.

The colt will be making his second trip through the sales ring next week in Ocala after RNA'ing for $27,000 at last year's Keeneland September Yearling Sale.

“We weren't getting enough for him as a yearling, we didn't think,” explained the Jones's longtime advisor Frank Taylor. “So Mrs. Jones decided to take him to the 2-year-old sale.”

Taylor continued, “Mrs. Jones usually has about 10 foals a year and usually there is one or two that we don't get enough for and we'll send to Raul to get ready for the 2-year-old sales.”

The colt is out of C'Mon Sister (Successful Appeal), who is a half-sister to multiple Grade I winner Iotapa (Afleet Alex).

“He's a very scopey, two-turn looking horse,” Taylor said. “He's from a heck of a family, there are a lot of good horses in that family.”

Of the colt's bullet breeze, Taylor said, “He's been training great all winter and Raul thought he was going to do really good. So we weren't overly surprised, but :9 4/5 is awful good. He had an amazing breeze. We are obviously very happy it and now we're hoping to have some luck in the ring. Hopefully he'll continue on to be a top horse.”

A colt by Pioneerof the Nile (hip 786) turned in Thursday's fastest quarter-mile breeze, covering the distance in :20 4/5 for consignor Eddie Woods. The dark bay colt is out of Fancy Day (Ire) (Shamardal), who is a daughter of graded winner Tizdubai (Cee's Tizzy). Tizdubai is a full-sister to champion Tiznow.

The under-tack show continues through Saturday, with each session beginning at 8 a.m. The Spring sale will be held next Tuesday through Friday and bidding begins each day at 10:30 a.m.