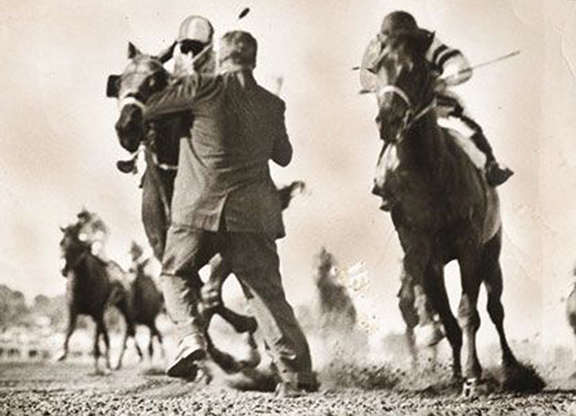 Vinnie Blengs was the trainer of the runner-up in this notorious race July 4, 1966 at Suffolk | Harry Carfagna/Suffolk Downs photo

Retired trainer Vinnie Blengs, a well-respected New England horseman who later expanded his stable to Maryland and Florida and saddled numerous ship-in winners in New York, died Oct. 5 in Hollywood, Florida. He was 90.

No cause of death was listed in his Boston Globe obituary, which noted Blengs “passed away peacefully.”

According to Equibase, Blengs won 1,981 races and earned over $24 million in purses in a career that spanned 1963-2010. But those totals do not include stats that pre-date the online database. In newspaper clippings from an earlier era, Blengs said he won his first race at Lincoln Downs in Rhode Island around 1949.

A native of Revere, Massachusetts, where Suffolk Downs was located, Blengs served in the United States Army prior to learning the Thoroughbred trade and rising through the ranks at his hometown track.

His top-earning horse was Dr. Root, who won the GI Sword Dancer H. at Belmont Park in 1991.

Blengs trained horses for longtime New England friends as well as the racetrack executives David Romanik and Barry Schwartz. He was also known for mentoring the jockey careers of Rene Douglas and eventual Hall-of-Famer Edgar Prado.

Blengs won four training titles at Suffolk Downs, and he won the 1991 training title at Laurel Park shortly after relocating from New England. That Laurel title came in the midst of a five-year run in which his horses earned more than a million dollars in purses each season between 1990 and 1994.

Blengs was a regular buyer at the Ocala Breeders' Sales Company, and he relished the challenge of the bidding process nearly as much as he did training horses.

After winning one spirited bidding war in 2002 against a competitor with far deeper pockets, Blengs quipped to Daily Racing Form, “Only in America can a guy like me outbid a zillionaire like him. What a country!”

Blengs also earned an unintended slice of New England racing lore for one of his horses that didn't win at Suffolk Downs.

On July 4, 1966, an intruder ran onto the track just as the field was barreling down the stretch for the closing-day Mayflower S. Despite running directly into the path of the leaders, the trespasser was only grazed, spun around, and knocked to the ground. The Suffolk Downs photographer managed to snap off a remote camera shot that framed the bizarre incident perfectly, and the photo was reproduced around the world.

Blengs, who trained Taunton, the second-place finisher, didn't see the incident because his view from near the rail was blocked by the large crowd. After the race, he asked Taunton's jockey why he had pulled up prior to the finish. When Blengs was told what happened, he said, “Boy, I've heard a lot of excuses in my day, but never one like that.”

Blengs was predeceased by his wife of 50 years, Theresa.

According to the Globe obituary, celebration of Blengs' life will be held at a date to be determined at Gulfstream Park.

Donations can be made in memory of Blengs to a charity that he supported, the Permanently Disabled Jockeys Fund (online link here).