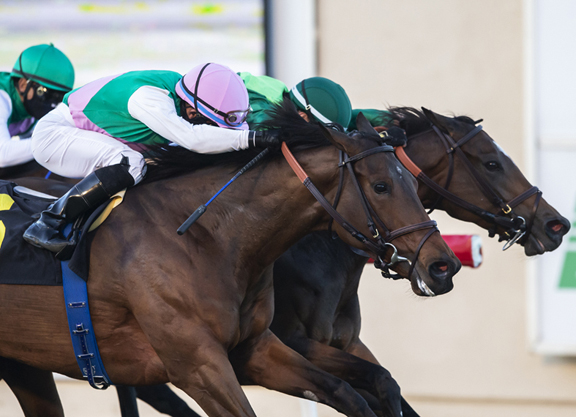 Juddmonte's Viadera (GB) (Bated Breath {GB}) captured the 2020 GI Matriarch S. at Del Mar and looks to defend her title in Sunday's renewal. Last year's victory was her third straight and she kicked off this term with a fourth in Saratoga's De La Rose S. Aug. 8, an event she won last year. Scoring by a nose in Saratoga's GII Ballston Spa S. Aug. 28, the bay could only manage sixth last time in Keeneland's GI First Lady S. Oct. 9.

Trainer Chad Brown, who saddled three of the last four winners of this event, also sends out Regal Glory (Animal Kingdom). A seven-time stakes winner, the Peter Brant runner's resume is missing just one thing, a Grade I victory and she will likely be favored to get it in this six-horse event. Kicking off this term with a win in Aqueduct's Plenty of Grace S. Apr. 11, the chestnut was fourth in Belmont's GI Just a Game S. June 5 and captured the De La Rose. She enters this off a half-length second to her stablemate in the First Lady.

Mike Stidham is also represented by an accomplished runner here in Princess Grace (Karakontie {Jpn}). Closing 2020 with a win in the GII Mrs. Revere S., the Susan and John Moore homebred opened her 2021 account with a win in the GIII Dr. James Penny Memorial S. July 6 at Parx. She followed suit with wins in the Aug. 7 GII Yellow Ribbon H. and Sept. 11 GIII Kentucky Downs Ladies Turf S. Princess Grace led every step of the way in Del Mar's GII Goldikova S. Nov. 6, but yielded late to be third.