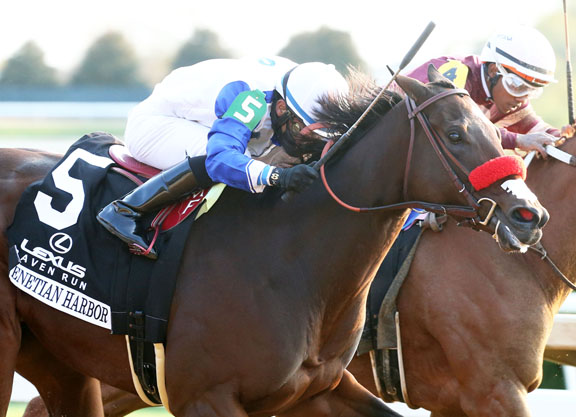 Venetian Harbor (Munnings) was hustled to the front by Manny Franco and made all the running, holding off Finite (Munnings) by a neck to lead home a one-two finish for her in-form, young sire in the GII Lexus Raven Run S. at Keeneland Saturday.

The bay, favored at 8-5 while seeking her first win since a blowout victory in the GII Las Virgenes S. at Santa Anita back in February, led the field of eight through early fractions of :23.06 and :46.17, and was traveling nicely as they hit the quarter pole.

She kicked for home with a two-length advantage, but was looking for the wire as GII Golden Rod S. and GII Rachel Alexandra S. heroine Finite came with a menacing rail run in deep stretch. Venetian Harbor had just enough left in the tank to hold on, however, and punch her ticket to next month's GI Breeders' Cup Filly & Mare Sprint.

“Our intention was to go to the Breeders' Cup, but we felt this would be a good opportunity to get a race in her,” winning co-owner Joseph Ciaglia said. “I couldn't be any happier today.”

Franco added, “She's happy when she's on the lead. She showed it today. She's a nice filly.”

Venetian Harbor rounded out the bottom half of the exacta in her last three trips to the post behind some heavy hitters. She was second to the mighty Swiss Skydiver (Daredevil) in the GIII Fantasy S. at Oaklawn May 1, second to Speech (Mr Speaker) in the GI Central Bank Ashland S. July 11 and second behind 'TDN Rising Star' Gamine (Into Mischief) in the GI Longines Test S. last time Aug. 8.

Ashford sire Munnings nabbed the Raven Run exacta with 3-year-old daughters facing each other for the first time. Both Venetian Harbor and Finite are graded stakes winners of 2020 and join other current top sophomore filly and fellow graded winner Bonny South in the Speightstown son's count of 17 graded winners and 42 black-type winners overall. Interestingly, Finite and Bonny South are both out of Tapit daughters, but Venetian Harbor is out of a daughter of Street Cry (Ire). Like Munnings, the late Street Cry had gotten plenty of good sons, but it was his daughters who really seemed to shine. As a broodmare sire, Street Cry has 77 black-type winners, including last year's champion older male Vino Rosso (Curlin). Venetian Harbor is the second foal out of her dam, whose only foal since was a colt born this year by Oscar Performance. She was bred back to both Constitution and Speightstown for next term. Venetian Harbor's fourth dam is Hall of Famer Safely Kept (Horatius), winner of the 1990 GI Breeders' Cup Sprint.